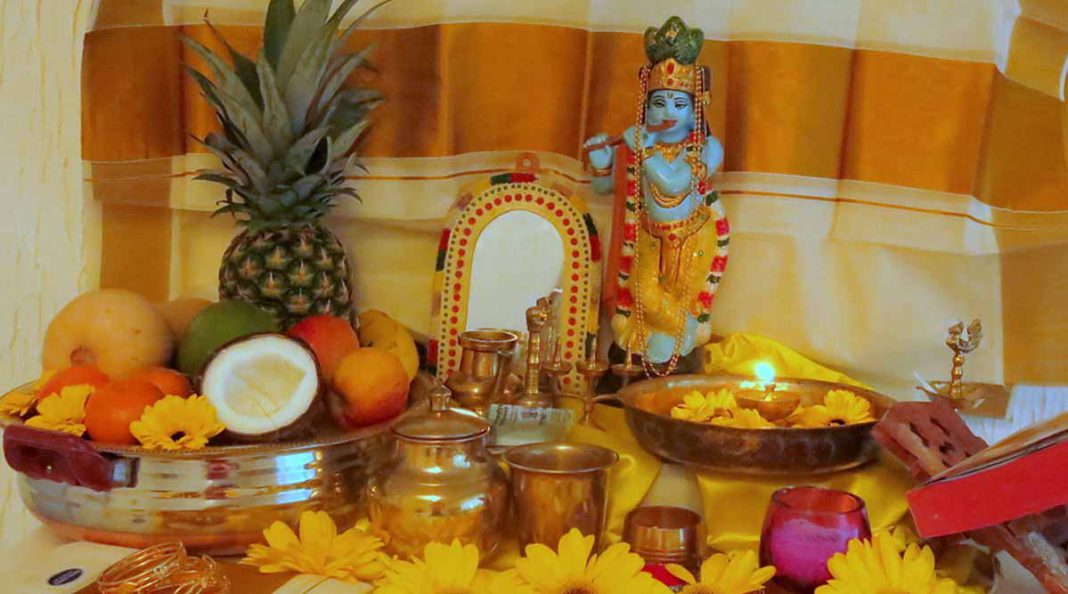 Vishu is the harvest festival that marks the beginning of the Malayalam new year. In Kerala, the festival is celebrated as a harbinger of new beginnings and hopes for a bright year ahead. The word ‘Vishu’ is derived from the Sanskrit word, implying ‘equal’. Hence, the festival celebrates the spring equinox when the day and the night are almost equal.

Vishu decoration is an integral part of this auspicious festival. It is an assortment of items that are considered to be auspicious and seeing it the first thing in the morning is believed to usher in prosperity throughout the year. These items include fruits, cucumber, rice, coconut, areca nut, betel leaves, sandalwood, coins, gold ornaments, and the Konna flower, all of which are placed surrounding a lit mental lamp, in the presence of an image of Lord Vishnu or Lord Krishna. Holy scriptures like the Ramayana and Bhagavad Gita are also kept here.

People recite the Ramayana in the presence of the sacred Vishu Kani. There are several folklore surrounding this traditional festival. One theory believes that Lord Krishna put an end to the demon Narakasura by killing him on the day of Vishu. Another theory states that the death of Ravana on this day heralded the rise of the sun from the east, which was not possible while the demon was alive.

Apart from seeing the Vishu decoration first thing in the morning, the day is celebrated by visiting temples, followed by relatives gathering together and enjoying a hearty traditional meal served on banana leaves. Traditionally known as the ‘Sadya’, the feast includes rice dishes, curries, banana chips, pickles, among others.

The new year is celebrated in various other parts of India as well – Baisakhi in Punjab, Gudi Padwa in Maharashtra, Bohag Bihu in Assam, and Poila Boisakh in West Bengal, on the 14th or 15th of April. In the year 2022, Vishu will be celebrated on 14th April.

The Kani, an essential part of the Vishu decoration ideas, represents the union of Prakruti and Purusha. The Kani Uruli, the shallow circular vessel prepared from bell metal, is the representation of Prakruti. It is believed that Lord Vishnu, Lord Krishna, and Kala Purusha inhabit the Uruli. Kanikkonna is his crown, Valkannadi is the mind, Kanivellari is the face, and coconut lamps are the eyes. The lit lamp denotes welcoming God and eliminating the darkness that ignorance brings with it.

Traditionally, the Uruli is made of a blend of five metals to denote the five elements of the universe – earth, water, fire, air, and space. The gold coins and ornaments symbolise spiritual wealth and affluence, which should be shared by the elder members of the family with the younger generation. Lit lamps are placed in the two halves of a split coconut. Alternatively, both the halves of a split coconut can be filled with oil and used as lamps.

The Kani arrangement is prepared the night before Vishu by the grandmother or mother in the family. The Vishu Kani is supposed to be seen by every family member after waking up in the morning. People close their eyes as soon as they wake up and are taken one by one by the eldest female family member to where the Kani has been placed. Next, it is the turn of the animals and plants to see the Kani. The Kani is taken to the plants and animals so that they can reap its good luck too. Vishu Kani is hosted in many popular temples of Sabarimala, Ambalapuzha, and Guruvayoor. People throng these temples in the early hours of the morning to see the Vishu Kani.

The age-old traditions stand testimony to India’s rich traditions, heritage, and culture. Learn more about Vishu Kani decoration and #BeALittleMore when you participate in it wholeheartedly.

How do you participate in Vishu Kani decoration and celebrate the festival? Tell us about Vishu decoration ideas in the comment section below.