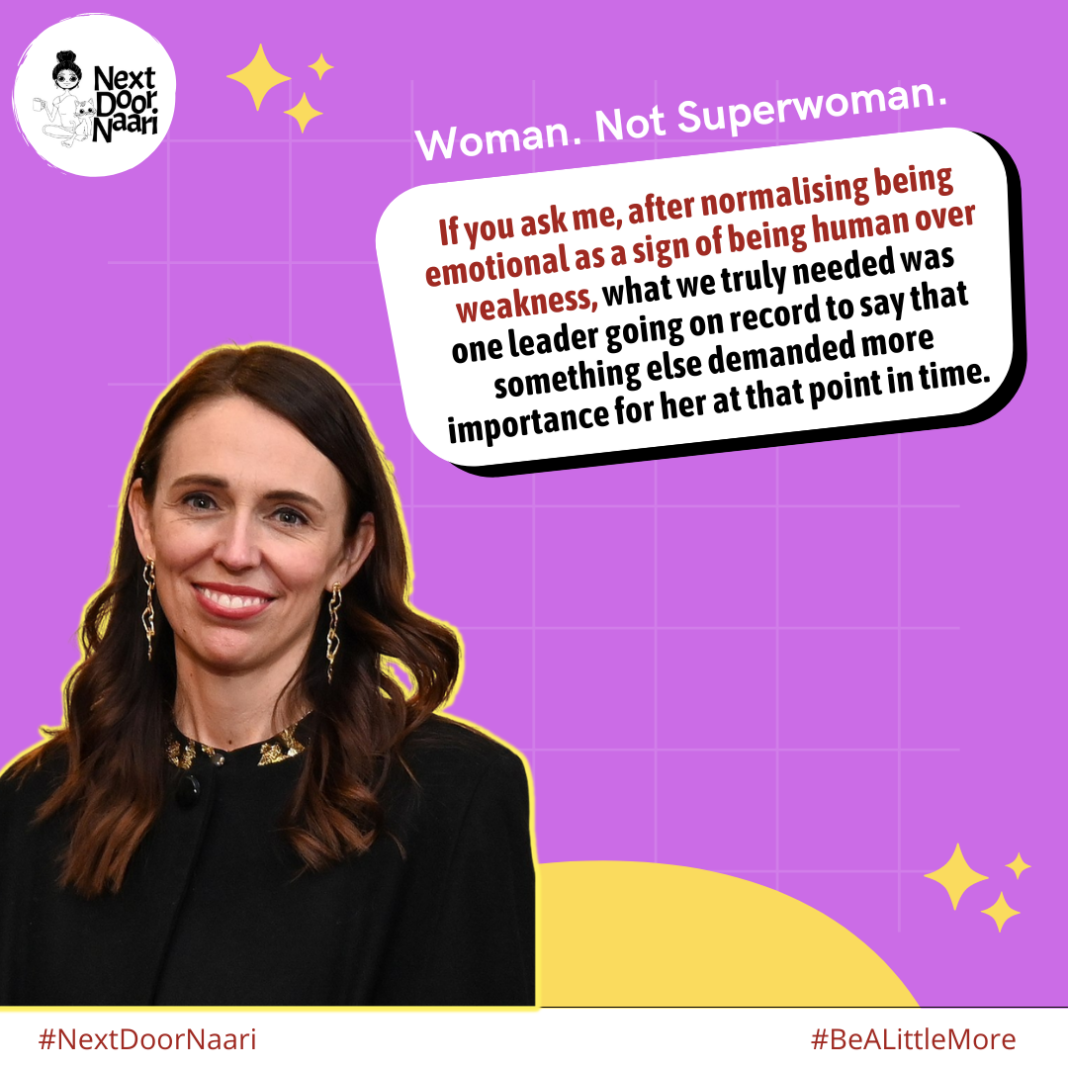 As women, we’re often brought up with the narrative that simply by virtue of being female, we have what it takes to manage multiple worlds with absolute perfection. Women are born multitaskers – a belief passed down over generations. With women who balance the unending list of home, family, career, fitness, wellness and much more labelled as ‘superwoman’. And women who falter even the tiniest bit being made to feel guilty for the same. Because social expectations demand you have a successful career, a fulfilling family life, an enviable body and fashion sense – all at once.

Recently, New Zealand’s Prime Minister Jacinda Ardern announced that she would no longer be seeking re-election for a third term. Especially after she had served as the Prime Minister for two consecutive terms – eight years. Saying that physical and mental demands of the job had exhausted her, and she wished to prioritise other things – her four-year-old daughter for one. This from a woman leader who was praised globally multiple times – her ability to deal with the COVID-19 crisis in New Zealand, and just raise the bar for women leaders in the political circuit. Managing both personal and professional life with aplomb.

If you ask me, after normalising being emotional as a sign of being human over weakness, what we truly needed was one leader going on record to say that something else demanded more importance for her at that point in time. Despite the way popular culture often displays it, it’s not always a cakewalk to manage every single facet of your life without ensuring that one doesn’t take precedence over the other.

One key reason why this is even more relevant in case of women is because of the way they’re made biologically. The physical demands of pregnancy and childbirth being a crucial one – this isn’t just a biological occurrence, rather a life phase of its own. One where despite advancements in technology, women are more involved in it than men. And even in cases when women are fortunate to have support of family or sometimes the financial flexibility to hire additional support, there are still instances where you simply want to put one above the other. Sometimes out of choice, more than anything else. Because in many cases even having the choice to choose is a privilege for a lot of women.

The biggest need of the hour for us is to stop glorifying the perception of the modern-day woman who is nothing less than the reincarnation of a modern-day goddess – managing every part of her life together. A narrative like this gives rise to undue pressure more than anything else. It is the need to recognise, empathise and understand, and perhaps even rework this expectation. No, women are not perfect. And despite what we’ve seen with the Tulsis and Parvatis on primetime television of the 90s – they are not idols of unselfishness and self-sacrifice that call for worship or adulation of that sort.

Thanks to this constant pressure of expectations, and the fear of being constantly judged – mental health and burnout issues are more common in women. With them constantly feeling that right from the way they look to their efforts, nothing is ever ‘enough’. And they don’t want to step back because they feel they will be judged, perhaps even rebuked for their inability to manage it ‘all’.

What women need is their own friends, family and the extended social circle for cutting them flak instead of expecting that they strut their so called perfectionism 24*7. To not pass that seemingly casual, yet unkind comment on how you haven’t been able to shed that flab you gained after childbirth – you remember Seema from the 10th floor. She didn’t put on even a single kilo you know, that too after twins. Maybe you should take some weight loss tips from her? To not give that unnecessary suggestion or advice unless it’s truly asked for. I think you should get married and settle down now, beta. After all how long are you going to stay single? To not plot women against each other. Look at Sharmaji’s daughter-in-law. She’s just been promoted. Not to mention, her figure is size zero, and yet she makes the best samosas in town! And perhaps most important of them all – to respect boundaries that women build, without trying to be over intrusive. Why did you put in that resignation? You’re just taking an unnecessary career break, just think about how bad it’ll look on your resume.

When one woman chooses to prioritise work over family, it is not because she is selfish enough to not care about building and enjoying her family life. Similarly, if the same woman chooses to take a break in her career because she believes she wants to give more time to her family, it is not because she is incapable or doesn’t care about professional progress. And if that woman puts on a few kilograms, or develops acne, it is not necessarily the result of not giving importance to her body. Perhaps if more women come out and speak about how they don’t want to necessarily give in to stress and burnout, we’re going to see more women drawing up boundaries.

What’s The Link Between Obesity & Infertility? A Fertility Consultant Explains

9 Tareeke To Naturally Boost Your Appetite (& Your Child’s, Too!)

Buzz 46: 5 News Tidbits About Athiya Shetty & KL Rahul’s Wedding You May Be Curious About

Buzz 46: Dipika Kakar Announces Pregnancy – 4 Other Celebs Who Are Soon-To-Be-Parents In 2023

Asana 46: 5 Heart-Healthy Yoga Postures To Add To Your Daily Routine

Buzz 46: 5 News Tidbits About Athiya Shetty & KL Rahul’s Wedding You May Be Curious About