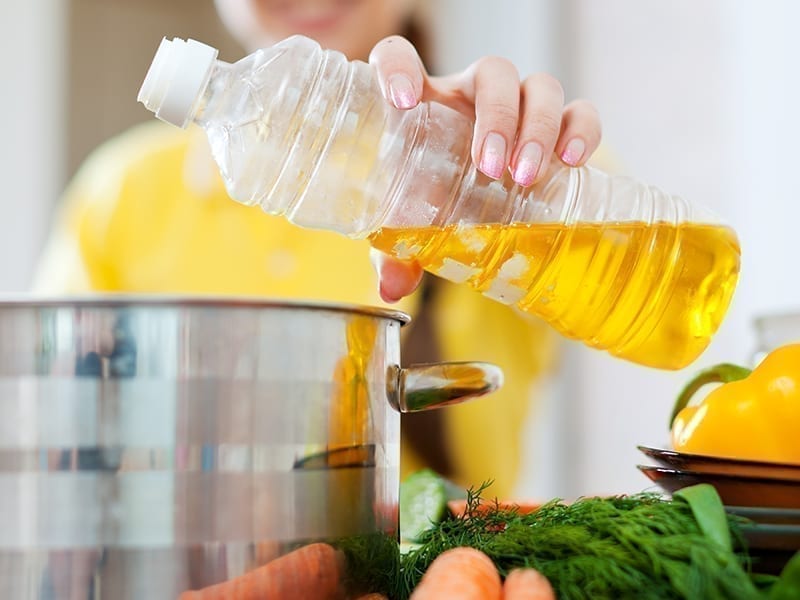 Bhajiya, samosa, vada and pakode are only a few of the range of Indian foods that use a ton of oil. Cooking with oils is a big part of meal prep, adding flavour to many dishes and no desi dish is complete without a tadka. With heart disease, obesity and diabetes being on the rise during and after the festive season, it becomes even more important to opt for healthier substitutes. But navigating which oils are best or worst for you and your food can be a challenge.

TC46 connected with Clinical Nutritionist Shweta Mahadik at Fortis Hospital in Mumbai. She shares some key tips on the use of cooking oils, healthy alternatives and some vital dos and don’ts.

1. Which cooking oils would you recommend people use as a healthier alternative to whip up their treats?

Indian cooking typically sees the use of refined oil for cooking. But this festive season, start using cold-pressed groundnut oil for cooking. It has a high smoke point which is suitable for Indian cooking. Several studies have revealed that groundnuts contain a good source of compounds like Resveratrol, Phenolic Acids, Flavonoids, and Phytosterols that block the absorption of cholesterol from the diet. It also contains Coenzyme Q10 and Arginine that is recognised for having disease preventive properties. Peanuts are an excellent source of Resveratrol and Polyphenol Antioxidant 26 which has been found to have a protective function against cancers, heart disease, tumour, and inflammation. This bioflavonoid is believed to improve blood flow in the brain by as much as 30%, thus reducing the risk of strokes.

2. What are the best cooking oils for various health concerns like heart health, weight loss and Keto diet?

Groundnut oil, sesame (til) oil, coconut oil, mustard oil, flaxseed oil are some of the varieties of cold-pressed oils best for many health conditions; they are also good for Keto diet, vegan diet, cooking, salad dressings, and baking. Here is a list of 7 day vegetarian keto meal plan to include in your diet and see the transformation yourself.

3. Why has cooking oil gotten a bad reputation?

The main reason why cooking oils have such a bad reputation is because of their high-fat content. Most oils are loaded with unhealthy fats known as ‘saturated fat’, which leads to an increase in the level of bad cholesterol. The altered antioxidant status reflects an adaptive response to oxidative stress. Eating food made with cooking oil results in various diseases such as cancer, diabetes, heart and kidney function problems and more.

4. What is the right temperature to ensure cooking oil doesn’t become toxic?

There are two properties of cooking oils that matter most:

5. How does ghee compare to cooking oil on health parameters?

Ghee is produced mainly by indigenous methods in Asia, the Middle-East and Africa. Ghee is mainly used for culinary purposes, but it is also used for therapeutic purposes. The typical flavour of ghee is its major criterion for acceptance. Carbonyls, Lactones and free fatty acids are reported to be the important ghee flavouring compounds. Ghee is fairly shelf-stable largely because of its low moisture content and possible antioxidative properties. Ghee may contain high amounts of Conjugated Linoleic Acid, a newly reported anti-carcinogen. Ghee can be served to the people of all age groups for their nourishment. It is a good source of fat-soluble Vitamins A, D, E and K along with essential fatty acids i.e. Linolenic and Arachidonic Acid which is responsible for wellbeing. As it has a high smoke point 250°C, it is considered an ideal medium for deep frying. Grandma’s secret ingredients, ghee for hair, face and delicous food.

Many studies found that ghee is nutritionally superior to other oils because of its medium-chain fatty acids content, which is directly absorbed by the liver and burned to provide energy. Therefore, for athletes, it can be of consistent energy source. Also, the energy from medium-chain fatty acids can be used to burn other fats in the system and to lose weight. Ghee exclusively contains Butyric Acid which contributes to its distinct flavour and aids easy digestion. Beneficial intestinal bacteria convert fibre into Butyric Acid and then use that for energy and intestinal wall support. Ghee stimulates the secretion of gastric acid, thus aiding in the digestive process. In Ayurveda, ghee is placed under most ‘satvic’ foods and is considered to promote positivity, growth and expansion of consciousness.

6. What are cold-pressed oils and how are they different or better from regular oils?

Cold-pressed oil is often used as cooking oil, it is also used for sautéing and deep-frying. It has a high smoke point which is suitable for Indian cooking. Cold pressing technique retains all its natural flavour, aroma, and nutritive value making this oil excellent for cooking and adds more taste to food dishes. Unlike refined oils, Kachi Ghani oils are not passed through chains of processing. They thus retain all the goodness nature has in oil. As oils are produced at a lower temperature which the fatty acid bonds doesn’t become toxic as it happens with many regular refined oils. Cold-pressed oil does not contain trans fatty acids. Cold-pressed oil contains valuable bioactive components such as Tocopherol Phenols, Phospholipids. The content of essential fatty acids, Sterols or Tocopherols may retard lifestyle diseases such as Cardiovascular Diseases (CVD), cancer, obesity and have anti-ageing properties.

7. Which are some commonly used cooking oils in India that one needs to replace and why?

Indian cooking has typically made use of refined coconut, peanut/groundnut, sesame, mustard oils and ghee for cooking, depending on what was available in the region. Refined oil is also known as the distilled, purified, or filtered form of natural oil. This oil is produced after treating natural oils with numerous chemicals like Hexane. In the process of making and refining these types of oils, it leads to Rancid Polyunsaturated fatty acids which do not hold up well to high heats. In the process of extraction, these oils oxidise and turn into trans fats. The smell is so rancid that a cleaning process has to take place using bleach to deodorise it. Eating food made with refined oil results in various diseases such as cancer, diabetes, heart and kidney function problems, and a lot more. Thus, cold-pressed oil is the best alternative for refined oil.

8. Is it okay to reuse leftover cooking oil after making a dish?

The answer is ‘no’. Several properties of oils are altered during frying, Total Polar Compounds (TPC) are formed during repeated frying. The toxicity of these compounds is associated with several diseases such as hypertension, atherosclerosis, Alzheimer’s disease, liver diseases, cancer. Therefore, it is very important to monitor the quality of vegetable oils during frying.

In order to safeguard consumer health, FSSAI has fixed a limit for Total Polar Compounds at 25% above which the vegetable oil shall not be used for repeated frying, as the usage of edible oil changes its physicochemical and nutrition properties. FSSAI took a step towards improving the health conditions of people in the country, FSSAI made certain rules that one must follow while using Used Cooking Oil (UCO). It recommends that the oil used for frying foods should be filtered and may be used for making curry preparations. It should not be used for frying purposes over again and again. When blue-grey smoke emerges or tough foam gets formed, UCO should also be disposed of. It also advises that UCO should be consumed within 1-2 days. It can be dangerous to store it for a longer time, as the rate of deterioration is higher in used oil.

The List: 25 Stunning Jewellery Pieces For The Festival Season