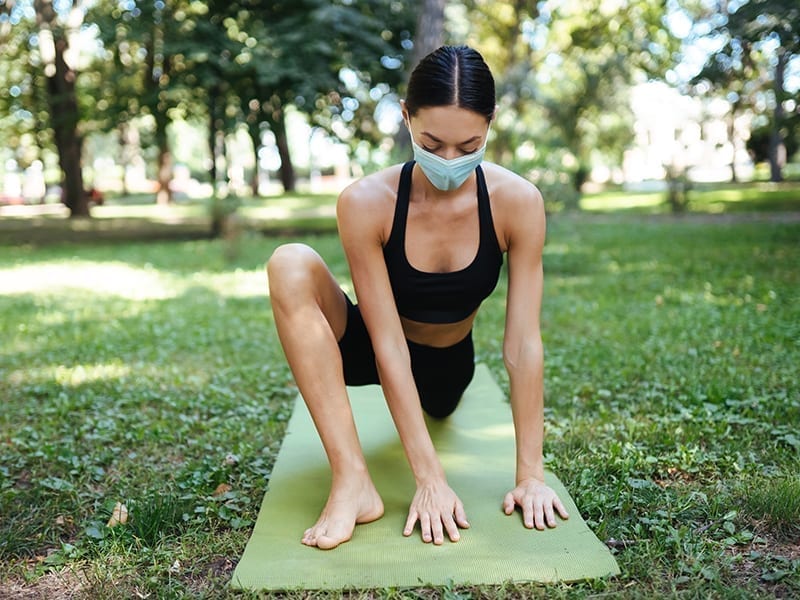 Surya Namaskar, also known as sun salutation, is a compilation of 12 distinct yoga poses that have distinct health benefits. Each of these poses of Surya Namaskar is performed in a specific sequence to complete one round of Surya namaskar. Performing Surya Namaskar offers a good physical workout to almost every muscle. It is an exhilarating experience and rejuvenates the mind as well as the body. Surya Namaskar is immensely beneficial for treating as well as preventing several mental and physical ailments. People often perform sun salutation as a part of their morning ritual while reciting the various names of the Sun God or Surya Namaskar mantras. This is considered to be a way of paying respect to The Sun.

“Health Is Wealth” is a popular idiom that sums up perfectly the importance of good health. Nurture your body with a good diet, a balanced lifestyle, regular holistic workout and you will always remain healthy. And what could be a better holistic workout than regularly practising Surya namaskar? Performing Surya namaskar step by step provides a complete physical workout and has several health benefits over the mind and body. Some of the Surya namaskar benefits have been described below.

Some of the Surya Namaskar poses enable easier and better circulation of blood. This is possible due to the positive effects of Surya namaskar on cardiac muscles. Improved heart function helps to pump blood more effectively, thereby enhancing the supply of oxygen-rich blood to all body parts.

A few poses of the Surya Namaskar act on the intestinal muscles, by creating a massage life effect on them. This helps to improve bowel movements, absorption of essential nutrients, and to increase the digestive capacity of the intestines. Relief from chronic constipation is one of the many Surya Namaskar benefits.

Performing Surya Namaskar regularly helps with adequate stretching and expansion of the muscles of the lungs as well as the chest wall. This helps increase lung capacity and keeps respiratory disorders at bay. Additionally, controlled breathing which is encouraged while performing all the Surya Namaskar steps also helps to improve lung functions.

By having a therapeutic action on blood circulation and cardiac health, Surya Namaskar proves its efficacy in managing blood pressure as well. Some of the Surya Namaskar steps help relaxation of the muscles inside the blood vessels. This helps to maintain optimum blood pressure.

A healthy mind is a reflection of a healthy body. Due to the benefits of Surya Namaskar improving physical health, the mind also gets refreshed and rejuvenated. This ancient exercise also has a direct impact on attaining mental relaxation by deterring anxiety, stress, anger and other negative emotions.

The positive effects of Surya Namaskar on blood circulation, respiratory functions, and mental health help enhance mental focus and the power of concentration. Surya Namaskar helps in the overall improvement of a person at physical and mental levels. Enhanced concentration helps to lead a better quality of life.

Each of the Surya Namaskar poses has a positive effect on the human mind and body. It is one of the easiest forms of physical workout requiring no equipment or a professional set up. After learning the technique properly, one can even perform Surya Namaskar without any guidance. There are instructional videos of Surya Namaskar for beginners which may be referred to by those who do not know how to perform sun salutation.

There are 12 yoga poses which when performed in a specific sequence constitute one complete Surya namaskar. These Surya Namaskar steps are designed to follow one another so that the body muscles get adequately stretched while shifting from one step to another. Each of the 12 poses of Surya Namaskar has been described below in detail.

Performing all these Surya Namaskar poses completes one repetition of the sun salutation.

It is very important to perform Surya Namaskar step by step and keep the sequence intact to gain complete health benefits of each of the steps. Performing Surya Namaskar is an exhilarating and refreshing experience for the body and mind.

Mantras are words or phrases that can be repeated cyclically while meditating, praying or even while performing Yoga asanas. Surya namaskar is one such Yoga asana that is often combined with the recitation of Surya namaskar mantras. The Sun is revered as a superior entity and worshipped by Hindus. The ancient art of Yoga teaches Sun salutations as a way of respecting The Sun. The Surya namaskar mantras are Sanskrit chants signifying the 12 names of The Sun described in ancient scriptures of the Hindu religion.

The Surya Namaskar mantras have been listed below along with their meaning:

Here are a few tips to recite mantras while performing Surya Namaskar:

While it is not mandatory to recite mantras while performing Surya Namaskar, it offers a more fulfilling and rejuvenating experience if mantras are recited.

Yoga is the most ancient form of exercise described in various Indian scriptures. Yoga has now gained a massive number of followers and enjoys global popularity. Several branches of Yoga have emerged over the years, which follow the basics of Yoga albeit with slight differences. These branches of Yoga have also created their own versions of Surya Namaskar by modifying the existing steps of Surya namaskar. All types of Surya Namaskar are equally effective to develop a healthy mind and body.  Some of these variations have been described below.

These variations offer some additional Surya Namaskar benefits to the one who practises them regularly. Despite the variations, all forms of Surya Namaskar are based on the same philosophy that is mentioned in ancient Indian literature on Yoga. The human body has the capacity to absorb the energy of the Sun by activating the solar plexus. This energy is capable of aligning all chakras within the human body and in keeping good health.

Know these tips if you want to practise Surya Namaskar and get the most out of it:

Surya Namaskar is one of the few asanas offering a holistic workout to the mind as well as the body. Contrary to common belief, performing Surya Namaskar for weight loss is as effective as going to the gym or performing other rigorous physical activity.  Surya Namaskar is not only an excellent form of exercise but also a great way of preventing several illnesses. While it is not a substitute for medicines, Surya Namaskar has a therapeutic effect on several systemic disorders. It helps to harness the dormant energy that you never knew existed within your body and mind. Performing Sun salutation daily opens doors to living a healthy and accomplished life. When practised regularly, performing Surya Namaskar becomes not just a part of the day’s routine but a way of living.

Budget Shopper: 5 All-Natural Face Washes You’re Sure To Love In 2021