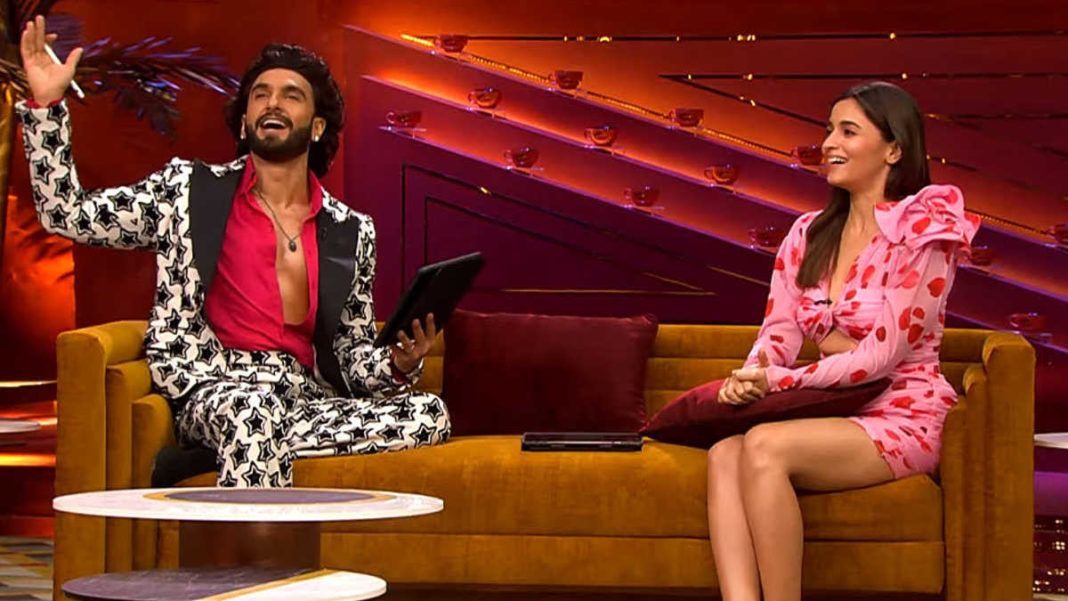 Abhi aayega…abhi aayega…! Koffee With Karan Season 7 was all set to launch at 7 p.m. sharp on Hotstar+Disney. But it was late by quite a few minutes, leaving the audience waiting with bated breath for those few minutes that seemed like hours. Dressed in a red hot suit paired with black and red striped pants, Karan Johar welcomed the cute-as-a-button Alia Bhatt and the forever flamboyant Ranveer Kapoor, the first guests of Season 7 of the show.

1. Ranveer Singh Is A Pammi Aunty

Karan revealed that is a gossipy Punjabi Aunty in Ranveer because he has his nose everywhere and wants to know it all. Alia couldn’t agree more to that and referred to his co-guest as Pammi. She went on to say that she can talk about anything with him since he is interested in everything. The host backed her claims and discussed how he was interested in every aspect of Alia’s argument with her house manager. He even played an indispensable role in selecting kangans for her haldi and mehendi, offering his expert opinion about the number of diamonds used in the bangles.

Read: Alia Bhatt’s 5 Aspiring Movies That Made An Impact On Aspiring Actors

From the young actors of the Hindi film industry like Varun Dhawan and Kartik Aryan to the B-Town stalwarts like Shah Rukh Khan, Aamir Khan, Hritik Roshan, and Ajay Devgn, Ranveer aced mimicking everyone like a pro. Karan rightly pointed out that it is a tough challenge to mimic Aamir but the actor excelled at that too! The host and the co-guest couldn’t stop but laugh their hearts, lungs, and kidneys out at the impeccable anukaran performance and term his skills as genius and epic. Karan exclaimed that he was completely in the dark about Ranveer’s expertise to imitate others. The actor replied by saying that he himself was caught unawares about this side of his when he did it for the first time.

Koffee With Karan Season 7 introduced a new segment, the Bingo round, and Ranveer’s answers managed to eke out quite a few laughs. However, the conversation around his sex playlist was unarguably the most outstandingly hilarious. Karan disclosed his love for classical music (albeit, not during the act) to which Ranveer churned out different taal and rhythms of classical music that suggestively denote the intensity of movements during a sex sesh. The actor also divulged how he has a different playlists for sensuous and passionate sex and a rauchy, randy one.

Oh, most of us have been there and done that! Alia is no exception to the bizarrely creative and chucklesome first email IDs that almost all of us have had once upon a time. Here was another of those side-splitting hilarious moments of the Bingo segment when Alia revealed her first ever email ID – punkbabe_21. And Ranveer couldn’t stop his riotous laughter. Alia went ahead and said she has no idea where the number 21 comes from because she was 13 at the time of opening the email account.

5. Alia’s Goof Up In The Buzzer Round

Yeah, you read that right! This is yet another one of the new segments introduced in this year’s season of Koffee With Karan. In the buzzer round, after a flurry of questions were thrown at them, the guests were given one topic each to talk about for 30 seconds. Alia’s topic was “My Marriage” and, wrongly interpreting the topic to be about the host’s marriage, she started talking about how happy she would be to see Karan get married. On being pointed out her misinterpretation, they all burst out in laughter, while Alia collapsed right on the buzzer, making it hoot non-stop.

#BeALittleMore filmy and catch up on Season 7 Episode 1 of Koffee With Karan, starring none other than the hot stars Alia Bhatt and Ranveer Kapoor. And, don’t forget your tub of popcorn because it is no less than a blockbuster masaledaar Dharma Productions movie.

11 Sex Positions For Explosive Sex In Your Kitchen