More
WorkEntrepreneurship#BeALittleMore: 4 Inspiring Women Who Are Shattering The Glass Ceiling In Male-Dominated...
Advertisement

#BeALittleMore: 4 Inspiring Women Who Are Shattering The Glass Ceiling In Male-Dominated Fields 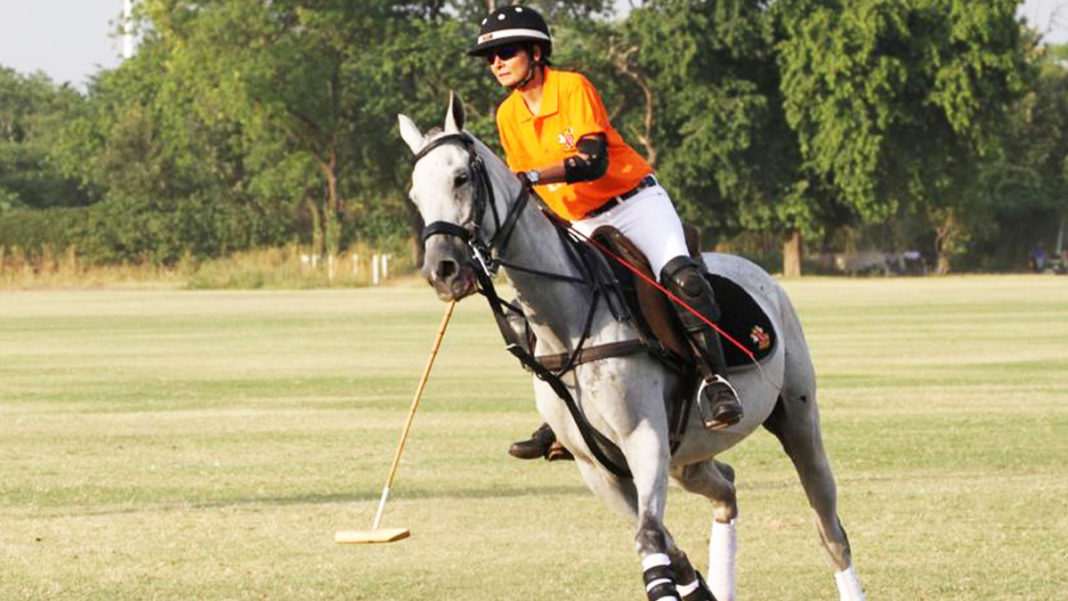 Celebrating International Women’s Day is such a waste of time. No, don’t get us wrong. We aren’t saying that it shouldn’t be celebrated at all. All we’re trying to say is that women’s empowerment and celebrating their achievements should be a recurrent theme in our everyday lives. Otherwise, the day simply boils down to a marketing gimmick where everyone applauds the advancements made by women on that one day and forget about it on the remaining 364 days of the year.

It’s time for less talk, more action. Take a look at the stories of these trailblazing women who are acing the game in male-dominated fields. Like them, we too, hope to #BeALittleMore every day.

“I had just returned from the USA in 2010 and had gone to watch a game of Polo in Mumbai. It is then when I fell in love with the game”, Rinaa quips. And that’s what made her want to become a polo player—something no woman had done before in India in the 90s. She had always wanted to play a tough sport but had not decided on which sport she should take up until she found her love for horses. And then there was no looking back. Discovering that riding a horse for polo was way different from normal horse riding, she travelled to Argentine, Santa Barbara, and then England to learn the craft. At this point in time, she was the only active woman Polo player who also had her own Polo team, founded in the year 2014. She also sponsored a Polo game in Jaipur and played with 50 men players, with her being the only woman in the tournament. No mean feat, indeed!

Around this time, Rinaa decided to marry her passion for the sport with her penchant for fashion and entrepreneurship and started her own equine fashion line called Rinaldi Polo. Having completed a course in Fashion Design from New York and the prestigious Harvard Business School, Rinaldi Polo has catered to some noted global stars like Goldie Hawn, Natalie Portman and Naomi Campbell. The equestrian fashion brand was founded in 2015 when Rinaa was already a shoe designer and had her sights set high for extending her line of products to boots, breeches, handbags, and Polo bags.

That’s not the end of her list of achievements. Rinaa is also an accomplished DJ, having formally trained in Amsterdam. She has always found herself inclined towards music, having played the piano during her childhood. So she decided to turn her interest in music into a profession. But, this time, she decided to introduce herself to drums. After a year of training, she was ready to launch herself in the professional circuit and played at Prive, Delhi. She has been creating her own drums for about a year now and plans to launch her IP in Goa soon.

Rinaa is a woman of multiple talents. She surely wears multiple hats and wears them like a pro, and that too in fields that are predominantly dominated by men. About her experience in being an integral part of fields that are male-dominated, she says, “Initially, I wasn’t taken seriously at all. They used to look down on me thinking I wasn’t strong enough to play this game. I had to work very hard to prove them wrong and to practise double to make sure I set an example to all the women who aspire to play Polo.”

Rinaa has carved a path for young girls and they have now started playing the best. Her advice for women in the field is to practise hard, do all the drills that are required to be strong and work towards being focused. From her experience, she notes that Polo is a skilful game and doesn’t require too much muscle power. You go, girl!

After her stint as an aerobics and indoor cycling instructor, followed by the media industry, Nirali Ruparel, embarked on her entrepreneurial journey with Achilles’ Heel. It is a brand that specifically caters to customised shoes for men. And being a woman in this male-dominated industry is a journey by itself! Armed with a diploma in Footwear Design and Development Institute, Nirali dived into launching the first homegrown luxury bespoke men’s footwear brand in India that emphasises unique designs, without compromising on comfort and craftsmanship. The avant-garde shoes are a blend of traditional artistic handcrafting and modern techniques in shoemaking, and Nirali presides over it all with aplomb.

She draws the inspiration behind her entrepreneurial venture from her passion for creativity, fashion, and style and the realisation that she wants to be her own boss. She deliberately chose a male-dominated field, having noticed the gap in the Indian market. She wants to be the Jimmy Choo and Manolo Blahnik of India.

Nirali points out, “For me personally, I was surrounded by men who were willing to help out because I was young and super passionate and confident. But I know most times it can be tough to prove your worth in an industry run by men for decades. Mine was and still continues to be. It’s important to know how to work your way around and that’s what I did. I made all those men my mentors, keeping the discriminatory factors or negative thoughts aside. So, I could learn everything from them because after all, they knew best.”

Nirali is of the opinion that one can’t blame male entrepreneurs for being the leaders of this industry when women did not find the confidence to participate, lead or join the industry at the right time. She adds, “It is time that women step out of their comfort zone and stop taking shelter of this age-old excuse about controlling men and suppression and actually work hard to prove their worth.”

Her advice to women entrepreneurs is to step in, speak up, and be confident as millennial women in male-dominated fields. “You are rare and brave, so embrace your unique position and work hard and you will see how men learn to respect and value you.”

Shraddha Fogla has a Master’s in International Accounting and Finance from Cass Business School of London and has professional experience in the private equity and construction sectors. Widely different from what she does as a mompreneur. For Shraddha, her priorities changed when she became a mother, as does with a lot of other women. She wanted to stay close to her sons, see them grow up, and play an active role during their growing up years.

Shraddha had her unique style of teaching her son. Rather than rote learning, she preferred a more scientific approach of teaching that exercises the brains and helps her child get the basics right. Soon, other parents among her family and friends started approaching her regarding her style of parenting and she immediately realised that it was time for her to change her parenting decisions into a flourishing entrepreneurial venture. The idea of becoming a mom blogger for a professional parenting platform hit her and came to fruition. She understood that this would give her the opportunity to work at home and pursue her passion, while taking care of her baby—a perfect work-life balance.

When asked how she made her way as a woman through a male-dominated field, she says, “I’ve always been an individual with a strong head and knowing what I want to do.” Shraddha’s piece of advice for women who want to be a social media influencer is “Do it for your own passion. Do not try to imitate people and go for it for free gifts or collaborations that come up your way, just to be popular because that is not something that should be driving you. It won’t drive you much far into the future. Your word of advice or the teaching you want to spread out to the world should have a meaning for you as well as your audience who look forward to you. If you really want to be the winner in the race or among the top 10 in the race, you need to have a passion for it and work hard towards your goal. Keep on reading and keep on improving yourself. Learn from people and do what you love to do. Be focused.” Forge ahead, Shraddha!

Janhavi Raut’s Junglebuff Wildlife Safaris specialise in offering jungle safaris in all national parks in India for corporate groups and families of all age groups. Anyone who is at one with nature and wildlife can book a package for themselves directly through the brand’s social media page.

Janhavi had no idea about what the future held for her while she was pursuing her higher education at Ruia College, Mumbai. It was only later, while working with a Wildlife Resort chain and a Travel Company, that she discovered her passion for wildlife. She has also completed a course on Snake Taxonomy under Dr Varad Giri from Nidus Explore.

The seeds of Janhavi’s entrepreneurial journey were sown when she was diagnosed with clinical depression. For a much-needed change in surroundings, her mother accompanied her on a safari tour. This is when she discovered her passion for entrepreneurship in the wildlife space and realised what her calling was. Her love for wildlife and photography came as a secondary push.

While travelling in Ranthambore for four years, she started studying tigers as a species, and their generations and bloodlines at this forest reserve. Personally, she has tracked as many as 35 tigers in India. Thus, she is making a mark in an industry that she herself professes as being largely dominated by men. She says, “I was told on my face that I didn’t have what it takes to thrive in this field. And on so many occasions, I have been looked at with ridicule and even at times an occasional “ Choti ladki hai, kya kar legi?” People tend to not take a woman, especially someone of my age that seriously. They would choose a service of low grade from a man than opt for a better service from a woman just because she is young and alone.”

Her advice to young entrepreneurs is that it does not matter whether others take you seriously or not. What matters is how committed you are to your cause and what kind of service you want to provide to your clients. You need to find your ground and stand firmly on it. Nobody should be able to shake you and if you figure out your USP, clients will follow suit. It absolutely does not matter if you are a woman in a field of male dominance, your story will make noise and shake the stereotypes. Kudos to you, Janhavi!

Women have been quite late in taking the bull by its horns and forging ahead. But, as they say, better late than never. Now that women are taking it in their stride to make it on their own as entrepreneurs, the right time to march (pun intended) ahead is now. So, onward and upward, it is!