More
Next Door NaariThe Rise Of The Small Town Girl

The Rise Of The Small Town Girl 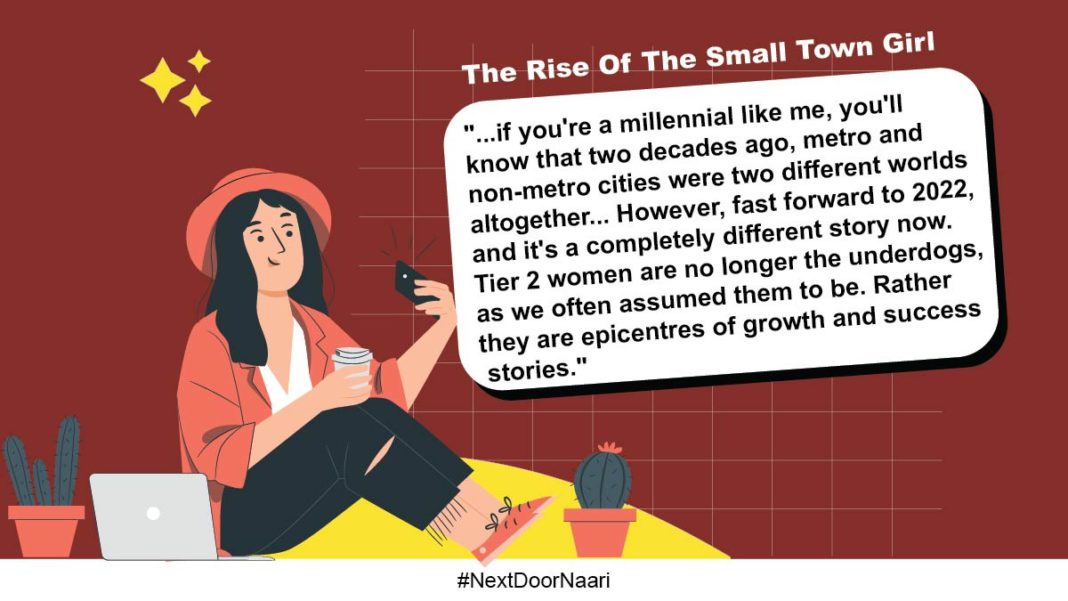 What do Priyanka Chopra, Kangana Ranaut, Disha Patani, Neha Kakkar and Dolly Singh have in common?

First, that they’re celebrities. The second, they’re celebrities from non-famous families. And the third, if you look even closer, the common thread among them is that they belong to small towns of India. Bareilly. Shimla. Lucknow. Haridwar. Nainital. And this list goes on – of Indian women making their presence felt not just in the country, but on the world map as well. Small cities and towns we don’t always think about when we think about a typical Indian city.

Officially, the name allotted to these towns is ‘Tier 2’ cities, smaller versions of the ‘metro cities’ – the Mumbais, the Delhis and the Bengalurus of the country we often assume represent India as a whole. And if you’re a millennial like me, you’ll know that two decades ago, metro and non-metro cities were two different worlds altogether.

Growing up, we metro city kids looked at our cousins from small towns the way our NRI cousins looked at us. With a fake superiority complex. We would have our share of harmless fun at their expense. By joking about how they only had one restaurant in their town that served pizza. Or how they still got their outfits stitched from their nukkad wala darzi while we had made the move to readymade garments ages ago. Of how their parents didn’t allow them for sleepovers. And it wasn’t just us. Perhaps it wasn’t even wholly our fault that even in the 90’s pop culture; films, TV shows and even novels – the small-town girl character had a very stereotypical depiction. The Geeta from Gorakhpur, the Sunita from Satara or the Juhi from Jabalpur.  The sanskaari, the salwar-kameez, bindi & bangle clad girl, speaks broken English, usually a lot less confident, independent and exposed to the world as compared to her big city counterparts.

However, fast forward to 2022, and it’s a completely different story now. Tier 2 women are no longer the underdogs, as we often assumed them to be. Rather they are the epicentres of growth and success stories. Right from entrepreneurs to artists to even professionals, the so-called small towns in India represent the rising middle class. And in many ways, the confident, empowered woman. And there could be multiple reasons for this. Thanks to the rise and penetration of the internet, access to knowledge and learning is no longer a challenge. And everything – right from sushi recipes to makeup hacks to learning how to grow a brand on Instagram, is one Google search, one YouTube tutorial, one podcast away.

The last couple of decades have also seen a rise in the movement of disposable income to small towns, which has led to a lot of women getting the opportunity to travel, study and learn enough to stay up to date. And most importantly, while most corporate jobs might still be concentrated in metro cities, several opportunities have sprung up for enterprising, go-getter women to channelise their aspirations.

Entrepreneurship is one that has seen humongous growth, with many women setting up their own ventures – from organic food to cruelty-free makeup to sustainable fashion. The rise of the creator and the gig economy has seen many women become influencers and freelancers. Finally, aided by the pandemic, an entire category of remote-work and work-from-home jobs has arisen, which has meant that many women need to not lose out on corporate success only because they are unable to relocate to metro cities due to personal or financial reasons. In fact, many women (and men) have actually reverse relocated – moved to smaller cities. Either for personal reasons, to be closer to family. And sometimes, purely driven by the fact that you can enjoy a better quality of life there due to a relatively lower cost of living as compared to big cities.

Barriers have broken down. Socially and economically. Even if you look at data and statistics, they too seem to be scripting the growth story of India’s ‘small-town girl’. India Today recently reported that women managers in villages make up 21.4 percent of the total workforce in such roles as against 16.4 percent in cities/towns. While the divide between men and women entrepreneurs still remains stark, there is a growing number of female-led startups, and that too, centred in small towns. What’s more, both customers and investors are taking such companies seriously as well.

And if you look at pop culture, that has evolved, too. Remember the Geet from Jab We Met? Or Mimi from Mimi? Or Babli from Bunty Aur Babli? No longer are these the bechari women we probably grew up seeing. Because these characters themselves are reflective of the category of women they stand for. Women who are stronger, comfortable in their own skin, and are empowered enough to make their own decisions, with regards to their personal, professional and social lives.

Nuts For Coconuts: 25 Health & Beauty Recipes You Need To Bookmark Right Away