More
LifeTaking Your Husband's Last Name Is A Choice, Not The Law: Real...

Taking Your Husband’s Last Name Is A Choice, Not The Law: Real Women Weigh In 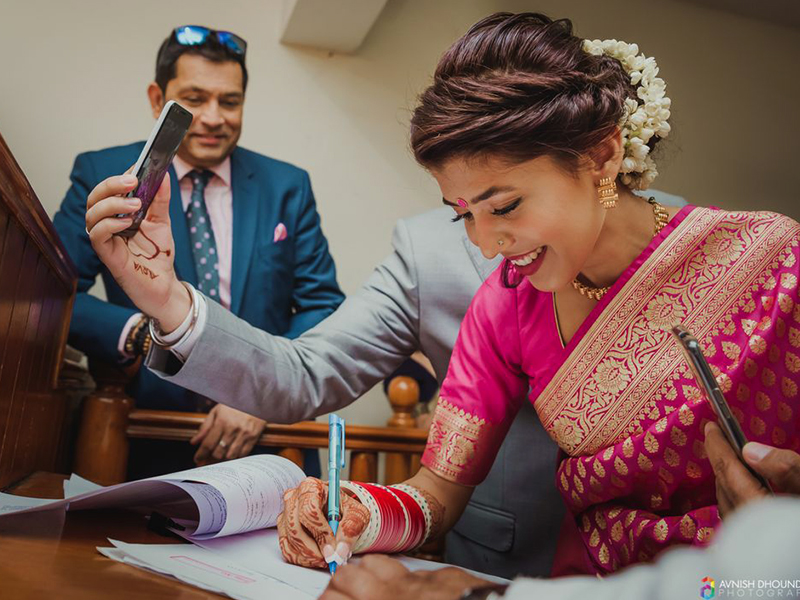 Remember Kareena Kapoor in 3 Idiots said, “Main shaadi ke baad apna surname change nahi karungi”? Similarly, many modern women are choosing to retain their names. Name change after marriage is a common thing in Indian culture. When you exchange wedding vows, you make a commitment to be lifelong partners with your soulmate. But what most people don’t realise is that although surname change after marriage is common, women have the complete freedom to opt-out of it. It is now perfectly legal for a woman to retain her maiden name after marriage. The law is clear now you don’t NEED to change your surname. PERIOD.

Not Changing The Name After Marriage? 15 Desi Women Share Their Views

TC46 put out a post on Instagram here saying “Taking your husband’s last name should be a choice. Agree or Disagree?” to raise awareness. And received a ton of comments where women shared their inputs! Here are the 15 eye-opening opinions from real women who stand for the right to choose!

“I haven’t changed my surname, I even call my husband by his name whether the parents and relatives like it or not. We, as a couple, are clear with what we want and will not allow any interference.” – Ritu*

“I’m a writer who has published work with my name and I am proud of it. It reflects my achievements and the name is tied to my work. So even after marriage, I don’t see myself changing it. It’s my identity and I chose to make it so.” – Ruchi*

“It is a personal choice, there is no law behind it that forces you to take your husband’s last name. But you must have your marriage certificate in place if needed.” – Sakshi*

“It is a personal choice. I’m living in Europe and in our building, out of 6 families, 2 are Indians and both of us have not changed our surnames. Even though we were asked to do it.” – Yaman*

“I’m actually very glad that it’s my choice, what if I end up not liking my husband’s last name? XD. 3 Idiots vaala scene ho jaayega, Phunsuk Wangdu much?” – Tara*

“It is unfortunately expected in Indian families that ladki toh naam badlegi hi! Well, that’s not the case anymore. I have been married for 35 years now and never had the urge to change my surname. Ever. It’s a simple misogynistic tradition that seems benign but builds up the toxic patriarchy” – Nisha*

“I took my husband’s last name by choice because I thought it would be great for my children also. 1 family, 1 last name. But it should never be forced onto someone, everyone is entitled to choose.” – Dia*

“As the daughter of a woman who didn’t change her name after marriage, I have seen it be the norm, not the exception in my family. And the most important thing that helped me shape my worldview was a super progressive dad who made sure to impart the same freedom onto me” – Duhita*

“I know some women who are worried that there might be some legal implications if they don’t change their name, need to know the law. I just want to be clear that it is absolutely legal to not change your surname after marriage. And also, it has no effect on your children.” – Bhavna*

“It’s been ages since changing surnames has been a choice and we all need to be aware of it. Also, there shouldn’t be any questions about this because just like men, women have the freedom to choose.” – Charu*

“Nowadays women are established, successful and literally made a name for themselves unlike the older times when men owned their wives and children, It was more of a brand of ownership. When marriages were an economic transaction it signified a woman as husband’s property. Changing surname is centuries of social conditioning and acceptance of a norm that is clearly misogynistic. I am not an asset, I am an individual.” – Faraana*

“You know what I think is nice? Just add his last name. No need to change your surname, it’s simple!” – Kiyara*

“People who live in medieval times think that women can’t have a choice. How is my power only limited to changing my surname and leaving my family for a boy? We all are much more aware than this old age brainless tradition. I come from a family where females are treated as equal and given their choices and I am proud of it and I would like every woman to have it.” – Deepika*

“Totally agreed, society doesn’t have the right to pressurize her on this. Obviously, women should always take decisions by their own choice, not by what others say or do.” – Mariam*

The topic of changing one’s last name after getting married has swayed significantly in recent decades, and even more so in recent years. As with most things wedding-related, couples now feel empowered to adopt the traditions they connect with and skip the ones they don’t. Though our dadi/nani’s generation might not have thought twice about a woman changing her name shortly after marriage, there are a number of reasons why you may be weighing your options because there’s absolutely no rule that says you need to trade in your last name for a new one!

Buzz 46: Dia Mirza Inspires A 5 Point Checklist For Moms-To-Be In Their Late 30s