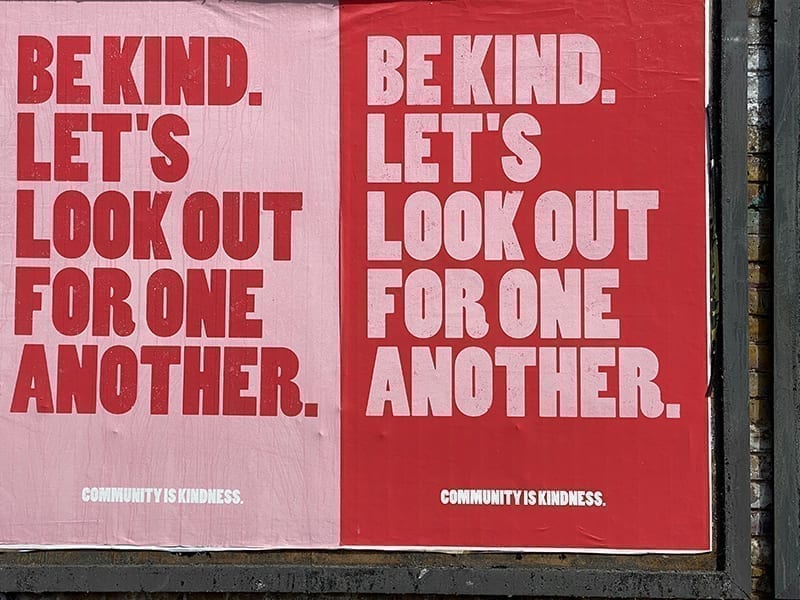 Whether it’s a stranger on a road helping a roadside dhaba go viral overnight amid an ongoing pandemic or Humans of Bombay instilling the faith of kindness in today’s age, any form of good deeds in the community showcases the positive power and the common thread of affection which binds all of us together. It was more than two decades ago when World Kindness Day was first observed and since then it has been unstoppable. All you’ve got to do is just look around and understand that this world, no matter how harsh it might seem on the outside, is actually a goofball of warmth and goodwill.

To establish the faith in kindness once again, this World Kindness Day, the entire TC46 team is bringing you inspiring stories on such strange random acts of kindness!

Celebrating kindness and the benefits we derive from this core aspect of human condition is invaluable. It reminds us time and again how we are neither alone in our lives nor do we live in a world where goodness is not apparent.

“On a groggy Monday workday, we were suddenly told to pack up and go home. It had rained all weekend and the rains had stopped the local trains in their tracks. I stepped out at 12.34 pm with my umbrella and one hand out to catch a cab home. It was 1:20 and while many cabs had stopped, no cab driver was ready to take me from Lower Parel to Dadar. Fed up, I began walking home because Mumbai rains come at you from all directions and the umbrella had rendered itself useless 20 minutes ago. I was drenched! About a kilometre (maybe more, into my walk), a kaali peeli cab driver stopped to take me on board. He already had a passenger who clearly looked like she wasn’t keen on sitting next to me, all soaking wet. He pleaded with her and explained it was on the way and that I could sit up front if she didn’t mind. My heart was warm, seeing how he made a case for me, even though all the while I insisted I didn’t want to trouble his passenger and could walk home. I finally sat in the cab and he dropped me home on the way. What’s more, I wasn’t carrying cash as I would usually use digital payments or book prepaid cab services. The sweet man didn’t even charge me for the stopover and assured the other passenger he would discount it from her trip too.”

2. The Ray Of Sunshine

“So I’m sitting by myself in a cafe, visibly stressed. And the chef comes to me and says, ‘There you go sweetheart, you’re too pretty to look so worried.’ Out he brings this delicious Panna Cotta, for which he refuses to let me pay. Anyone who knows me well will vouch for the fact that dessert is one of the things that genuinely make me happy. Once again, I’m convinced that despite all the unhappiness, there is so much good in the world. And it pushes me to carry forward this into others’ lives. Be the ray of sunshine, you never know whose day you’re brightening up.”

“I was in 8th standard, heading towards my bus stop at noon, walking past a school that was filling up with students. As I was waiting to cross the road, I saw a man and a woman on a scooter stopped in front of the school. The lady got off the scooter and as she gathered her belongings, something fell down. And there on the ground, I saw a small purse. I saw it and instinctively reached for it, running behind the lady. As I reached the gates, the guard refused to let me in. But I pleaded with the guard, showed him the purse and he let me in. As I hurried down the hallway, I was worried that I might miss my bus. I tapped her on the shoulder and handed over the purse. She has tears in her eyes and started thanking me profusely. Apparently, she has a lot of money inside along with a gold chain she has just bought. I now look back and think that anyone could have taken the purse and kept walking on that busy road and the lady would have been distraught. Being there at the right place at the right time did prove to be important.”

“It feels unfair to point out just one incident where a stranger has been kind, I’ve come across so many kind-hearted people, it’s hard to single it out. But, if I absolutely must, I would want to share this incident when I was just two-years-old and have heard the story so many times since then that it feels like I witnessed it all. 26 years ago, my maternal grandfather had untimely passed away while we were on a holiday in Udaipur. My mother, grandmother and everyone were heartbroken and devastated. They were clueless with the government procedures that were required for them to fulfil in order to go back home, cross states with the casket. Apparently, back then these things were quite complicated. However, out of nowhere, this Muslim man turns up like a God-sent angel helped my family through all the rituals, procedures, that were required and literally sorted it out and like a typical fairy-tale ending, he disappeared. No one remembers seeing him after, my family wanted to thank him but he wasn’t there. A complete stranger just magically appeared in one of the toughest times my family had to endure and to that my family would be eternally grateful.”

“It was my cousin’s wedding function in Goa and we had to keep our pet “Coco” at the vet’s house. Then came the wedding day and we were all very excited, enjoying in Goa when my mother got a call from the vet and he started saying that Coco was at the door and he felt that the puppy went outside on the roads as the doors were kept open. Also, the vet was completely unaware of where he went! Later on, we came to know from a restaurant owner that he saw the puppy running all alone and that other street dogs were following and barking behind him. At that very moment, the hotel owner decided to pick him up. He got the address and the phone number from the locket around the puppy’s neck (this was something which was always around for Coco’s neck for emergency purposes). The hotel owner was indeed the kindest of all to pick up Coco and keep him with him till we reached back home. He gave us a sigh of relief and I can’t thank him enough for showing such kindness.

“Winter is chilling in Jodhpur. As I was on my way to the station one day, two kids were standing and shivering in one corner. My heart sank as I saw them. I am that kind of a person who thinks twice before killing a mosquito and even if I do, it receives a complete funeral. So as I approached these kids, they broke down saying how they were hungry for 2 days in a row. I was completely heartbroken. Instantly, I decided to give my train a miss and instead ended up with these kids in the nearby market. I bought them two sweaters each and fed them kachori. They gave me one of the brightest smiles ever and till today I feel warm enough on a chilly Jodhpur winter night realising that it was the best decision I ever took till date.”

“My idea of kindness is very strong. I believe that the world is indeed a very positive place and I tend to stay away from people or places which spread negativity around me. And maybe that’s the reason why I love travelling so much. Any form of constancy makes me unproductive. I remember during my days in London, I loved waking up early in the morning and used to go for a walk. Even when I was feeling down, I knew deep inside that all I had to do was push myself out of the bed and take a long walk towards Hyde Park. So one such lonely day, away from my family and best friends, I was walking across random streets when I decided to count the number of people who would smile and wish me a very good morning. 15 minutes into it, I lost count. Almost everyone starting from a schoolgirl, a pregnant lady, a cleaner to a driver (who even lowered the window to ask me how my day was going) wished me & I was awestruck by the kindness and love people held for one another. Since that day whenever I walk down the streets early in the morning, I make sure to wish good morning and smile at strangers. Who knows that you might be the reason someone has an amazing day at home or work!”

This World Kindness Day, make your community a better place to live in. Share your stories with us in the comment section below!

Vocal For Local: Made In India Women-Led Ventures That Deserve Your Support