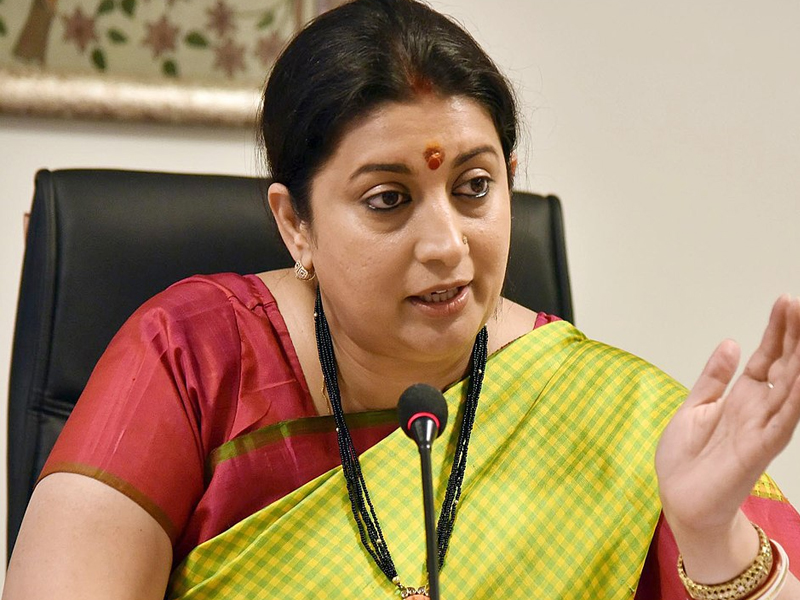 It’s the 2000s, you have just wrapped up homework and are sitting in front of the TV while your mom, nani, dadi, bua, chachi and all neighbourhood aunties gather around to watch the most beloved series on Indian television. Kyunki Saas Bhi Kabhi Bahu Thi introduced the world to Ekta Kapoor’s K-series but most importantly, it made Tulsi a household name. And with that Smriti Irani was loved by millions glued to their TV screens, mesmerized by the story of a young bahu and her sasural. While the series lasted 8 years and gave the audience it’s first-ever Hindi soap opera, Smriti Irani went on to conquer a lot more than just acting. Today, she holds 2 key positions in the Union Cabinet as Minister of Textiles and Minister of Women and Child Development. And she has shown that she is more than capable of being a well-rounded individual who has a passion for politics.

On 23rd March, which is her birthday, TC46 takes a look at her long and hard journey from acting to politics and applauds her strength, hard work and determination that’s aspirational for several Indian women.

Born to a Bengali mother Shibani Bagchi and Punjabi-Maharashtrian father Ajay Kumar Malhotra, Smriti Irani is the eldest of three sisters. She started her first job as a waitress. Before entering the television industry, Irani uses to work at McDonald’s in Bandra due to a lack of roles. She was a part of RSS from childhood as her grandfather was an RSS swayamsevak and her mother was a member of Jana Sangh. She was educated at the Holy Child Auxilium School in New Delhi. Then, she enrolled in the School of Open Learning at the University of New Delhi. She married a Parsi businessman Zubin Irani in 2011. The couple has three children, Zohr, Zoe and Smriti’s stepdaughter Shanelle, from Zubin’s first wife.

Smriti was one of the participants of Miss India 1998, but she could not reach the top 9. She made her first debut with the TV series Aatish and Hum Hain Kal Aaj Aur Kal for Star Plus. In the year 2000, she made her appearance as the famed Tulsi in Kyunki Saas Bhi Kabhi Bahu Thi. For that, she achieved five consecutive Indian Television Award for best actress-popular and four Indian Telly Awards. And not to be content with being in front of the camera, she co-produced the show Thodi Si Zameen Thoda Sa Aasman with Balaji Telefilms in 2006.

Smriti Irani joined BJP in 2003 and is a Member of Parliament  – Lok Sabha from Amethi. In 2004, she became vice-president of Maharashtra Youth Wing. She contested unsuccessfully against Kapil Sibbal from Chandni Chowk in 2004. In early 2010, she was appointed National Secretary of BJP. In August she was sworn in as a Member of Parliament from Gujarat to the Rajya Sabha. In 2014, she lost the election against Rahul Gandhi from Amethi. PM Modi appointed her as the Minister of Human Resource Development in his cabinet in May 2014. In a cabinet reshuffle in July 2016, she was shuffled to the Ministry of Textile. She was handed additional charge of the Ministry of Information and Broadcasting (India) when former Minister M. Venkaiah Naidu resigned for vice-presidential elections in July 2017.

Smriti, currently, is the youngest minister in the Modi Cabinet, and the first woman to hold office as the Union Minister for Human Resource Development and Union Minister of Textile. She is the youngest woman to be nominated to the Rajya Sabha. And she has shown with her work that age, truly, is just a number. As the Union Minister for HRD, she undertook a number of decisions, which helped in improving the quality, inclusivity and outcome of education in the country. As the Union Minister for Textile, she launched Apparel & Made up Sector Special Package for strengthening the entire textile industry by providing financial support to small-scale players in the industry. During her term as I&B Minister, Doordarshan’s net revenue rose to Rs 827.51 crores in 2017. The target was
Rs 800 crores. And as the Union Minister for Women and Child Developments, she undertook the initiative to define “child pornography” and a “zero tolerance” stance against the crime. Along with that, she launched India’s first Poshan Atlas, Bhartiya Poshan Krishi Kosh (BPKK) with Bill Gates through his foundation.

Smriti Irani is a perfect example of how women can make it big in any sphere of society they step in. From television and movies to entrepreneurship and politics, women are flagbearers of success, innovation and change. Tell us in the comments below who aspires you to chase your aspirations and why!

7 Ways Smoking Can Impact You & Your Partner’s Fertility