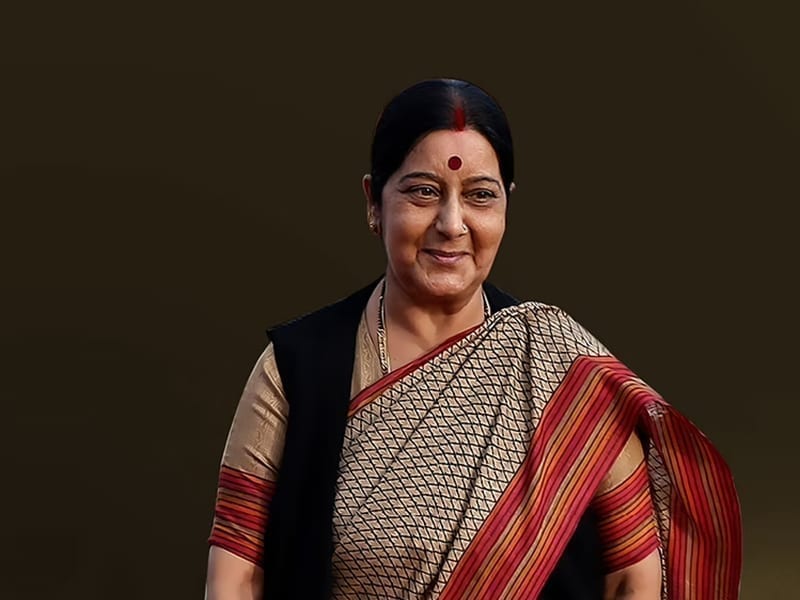 Every generation has a leader, a force to be reckoned with that lights the beacon of hope. And for women, especially the bharatiya naari, this stands true for myriad reasons. While for a long time the world of politics was reserved for the dhoti-clad and then trouser wearing men, women saw hope for a career with leaders like Indira Gandhi, Jayalalitha, Mayawati and more. One name that stands out, for what she represented was so much beyond gender, is Sushma Swaraj.

On her birthday today, we honour the outstanding work she saw to fruition as a Cabinet Minister (Labour and Employment), Minister of Education, Food and Civil Supplies, Union Cabinet Minister for Information and Broadcasting, Chief Minister of Delhi and many more titles of high prestige. TC46 salutes this inspiring woman of wit, courage and grace as we celebrate the legacy she has left behind.

The Rise Of The Lawyer

Born on 14 February 1952 at Ambala Cantonment, Haryana, Sushma Sharma Swaraj was educated at Sanatan Dharma College in Ambala Cantonment and earned a bachelor’s degree with majors in Sanskrit and Political Science. She studied law at Panjab University, Chandigarh and in 1973, she started practising as an advocate in the Supreme Court of India.

Her political career began with her association with Akhil Bharatiya Vidyarthi Parishad in the 1970s. Her husband, Swaraj Kaushal, was closely associated with the socialist leader George Fernandes and Sushma Swaraj became a part of George Fernandes’s legal defence team in 1975. She actively participated in Jayaprakash Narayan’s Total Revolution Movement. After the Emergency, she joined the Bharatiya Janata Party. Later, she became a national leader of the BJP.

The First Step Into Politics

Sushma Swaraj legitimised the film industry in 1998 as the Union Minister of Information and Broadcasting. This industry status made it eligible for loans from financial institutions and put an end to unreasonable interest rates and shady sources of money. Back in the day, around 25% of films at the time were financed by conventional moneylenders, who lent money at exorbitant interest rates of 36 to 40 per cent per annum. 70% of films were backed by assorted businessmen, including builders, jewellers and traders, while less than 5% under-production films got money from the underworld. With Sushma Swaraj legitimising the film industry, it was eligible for bank loans. Filmmakers breathed a sigh of relief as interest rates fell and dubious sources of money were eliminated.

5 Political Moves By Sushma Swaraj That Are Inspirational

1. The Marriage Of Leadership & Social Media

Twitter became more than just a social hub for Indians all over the world under her reign as the Union Minister of External Affairs. She used social media not merely as an outreach tool, but as an effective virtual darbar and made it the instrument for the voiceless. Adapting to the new age technology and means of communication, she strived towards creating connections with not just Indians but NRIs as well. She soon came to be known as ‘the common tweeple’s leader’ for her quick and responsive assistance on Twitter. Swaraj worked round the clock and once famously said “I do not sleep” and “I do not let Indian envoys sleep”.

She was an easily-accessible external affairs minister, a politician of many firsts and a powerful orator. This fierce leader is remembered for her memorable speeches. The 1996 trust vote speech was a fiery one, equating her analogies to the Ramayan and Mahabharat, as she explained why the saffron party had to step down. The 2013 duel with Manmohan Singh, though unusual, brought light to the severity of corruption with Urdu couplets they used to trade barbs at each other.

3. A Shining Example Of Women Power

Just like TC46 celebrates women with #PowerOfThePack, Sushma Swaraj became an outstanding example for women in politics. She was the first female Spokesperson of a national political party in India. She has many firsts to her credit as BJP’s first female Chief Minister, Union Cabinet Minister, general secretary, Spokesperson, Leader of Opposition and Minister of External Affairs. Sushma Swaraj made it possible to believe that it’s possible for a woman without famous parents to raise a family and at the same time ascend the political ladder. And proved that choosing either or both is completely up to the woman.

4. The Guiding Light For Those In Distress

It was through Twitter that she made the Indian foreign ministry people-friendly, accessible and responsive to the needs of the common people. Quick to respond and intervene when issues were brought to her notice, Sushma Swaraj was approached for help not only by Indians abroad but people of other nationalities as well. A quick read through her Twitter timeline shows that she had intervened on many occasions to grant visas to foreign nationals wanting to visit India for medical treatment earning her the title of ‘Mother Teresa’.

5. The Campaign Leader For Southern India

The former external affairs minister was instrumental in launching the BJP in the southern part of the country in 1999 Lok Sabha polls when she took on former Congress president Sonia Gandhi in Bellary, Karnataka. Even though Swaraj lost the election, her campaign style, her speech in local Kannada language and her personality ensured that BJP gained a strong foothold in the southern state. And almost a decade later, BJP formed government in the state with its leader as the chief minister for the first time.

Sushma Swaraj carried herself with grace and dignity. The iconic sindoor and saree-clad figure created long-lasting impressions and continues to be a motivation for aspiring women leaders. Her public life spanned an unblemished four decades and she will remain an inspiration for all young political aspirants that desire change through a mechanism of clean politics.