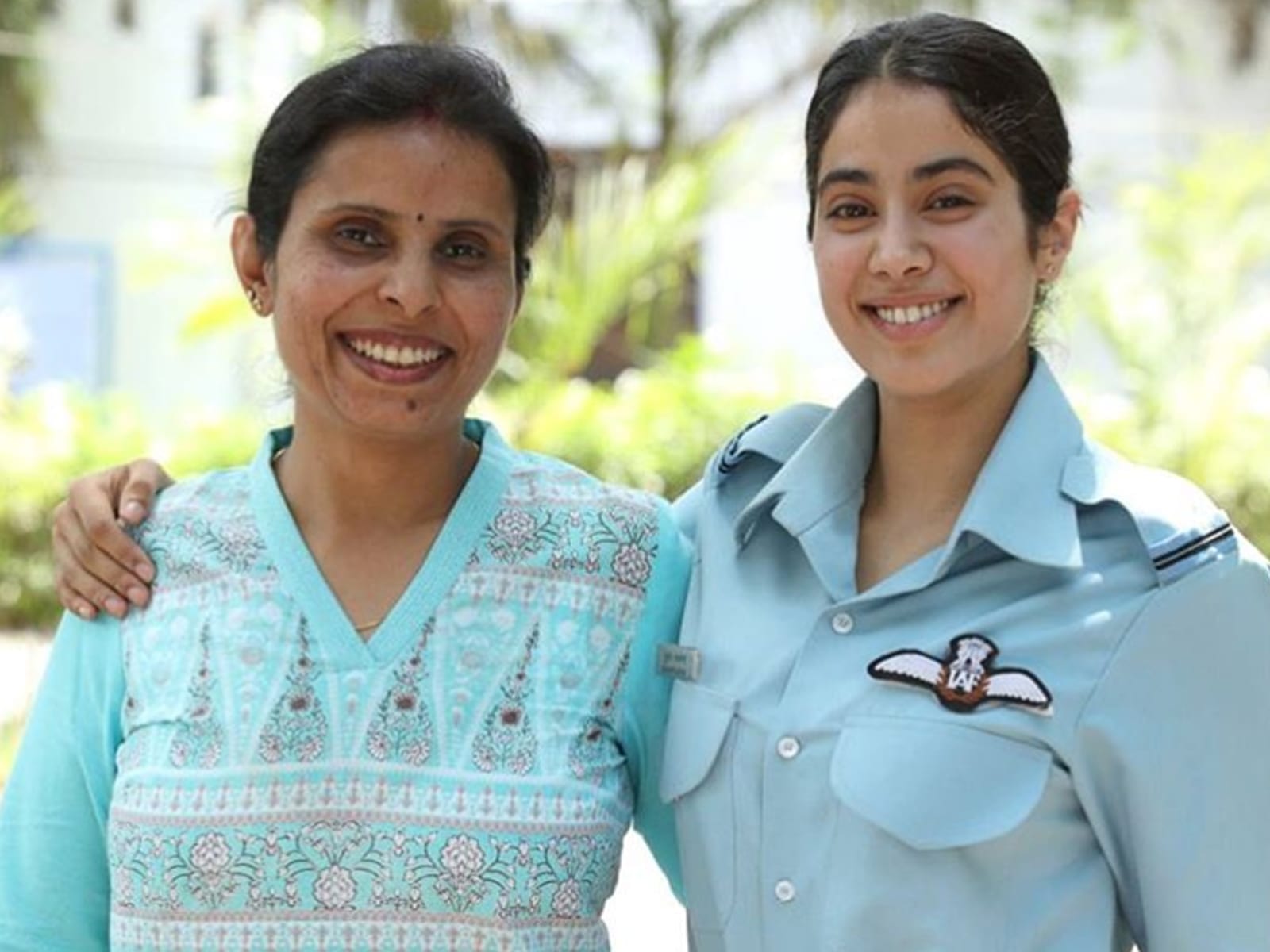 All set to release on Netflix on 12th August (tomorrow), Janhvi Kapoor’s portrayal of namesake character Gunjan Saxena has already garnered a lot of attention. This Dharma Productions film is based on the life of India’s first female pilot in combat, and the only Indian woman to serve in the Air Force during the Kargil war in 1999. On the eve of the release, we uncover the real life story of Gunjan Saxena who has inspired Janhvi Kapoor’s reel life character.

“I would say, it’s a very satisfying feeling when you save a life because that’s what you’re there for,” recounts Gunjan Saxena, in one of her interviews. The former IAF pilot not only served India during the Kargil War, but also managed to inspire millions of young women across the country when she flew the Cheetah helicopters into the war zone alongside fellow flight lieutenant, Srividya Rajan. Flying the helicopters successfully through the Kargil-Tololing-Batalik region for casualty evacuations and reconnaissance missions, Saxena was driven by her passion for serving the country.

The Lucknow-born girl had dreams of becoming a pilot from a very young age and in fact became a Kargil woman officer at the age of 25. Post the war, Gunjan was honoured for her self-sacrifice and for her extraordinary valour and grit. The immense revolutionary power that she still carries upon her shoulders is more than enough today to woo hundreds and hundreds of young Indian girls into joining the Indian Army or the Indian Air Force.

With an unwavering zeal Gunjan Saxena touched the skies with an air of utmost undying valour paving the way for Indian women to make a place for themselves in an area which was previously male dominated.

The epitome of fearlessness, Gunjan manual on life inspires lessons on breaking stereotypes and challenging the system to rise above adversities through the process of learning and unlearning, and determination.

Saxena was 5 years old when she knew she wanted to become a pilot. Imagine being 5 and already knowing what you want to do in your life? Growing up in a family of fighters, she already understood that she wanted to give her life to the nation. She went on to graduate from Delhi’s Hansraj College. At a time when there were apprehensions about letting women join the armed forces, Gunjan along with Srividya Rajan helped pave the way for more women officers in combat positions.

2. Everything Comes Down To The Effort You Put In

It’s important to be focused and soldier on with a goal in mind. Gunjan graduated from Hansraj College in Delhi with a Bachelor of Science degree in Physics, and later joined the Delhi Flying Club at Safdarjung Airport. Her first posting was in Udhampur where she had to face many gender-based biases, and even adapt to everyday problems like makeshift changing rooms until one was built for women. In every sphere of life, there’s no dearth of roadblocks. The point is to not lose your grit, determination, and continue to keep your eye on the end goal.

3. Never Back Down; Grab Your Moment & Shine

One of the defining points as an IAF pilot was when Saxena played her part during the 1999 Kargil war that broke out between India and Pakistan. She navigated her helicopter through the Kargil-Tololing-Batalik region for casualty evacuations and reconnaissance missions, saving lives and giving hope to people trapped in a war zone.

4. Do Not Let Stereotypes & Patriarchy Hold You Down

Female military do their jobs for the same reasons as men. The things that motivate women today to join the IAF or the Indian Army are the same reasons why men sign up for them too. So, when your passion and drive is gender agnostic, you should chart your path in a gender agnostic manner too. Don’t let anyone say you cannot do something just because you’re female. Both men and women want to be a part of something bigger and serving the nation and its people is the biggest of them all. The only thing that limits you is your mind.

5. You Can Be Both Feminine & Fierce

Flight Lieutenants Gunjan Saxena and Srividya Rajan flew their fighter helicopters through an area where the Pakistani army was shooting rounds of fire and artillery. In a war situation, the last person standing is the winner, not the last man or woman. And, Saxena stood her ground strong and proud.

According to the 2019 statistics, women comprise only 3.8% of the world’s second largest army compared to 13% of the air force and 6% of the navy. There are approximately 1500 female officers compared to the 40,000 men officers. With inspiring women like Gunjan who managed to embrace leadership and pave the way for future generations, it’s important we keep up the momentum so that we can continue to have more role models like Saxena.

7. A Job Well Done Will Always Stand Out

The lack of opportunities for women in the army led to the end of Gunjan’s tenure as a chopper pilot after 7 years of her indomitable service. For her outstanding show of courage in the Kargil war, she was awarded the Shaurya Vir Award, a gallantry award presented for valour, courageous action or self-sacrifice while not engaged in direct enemy combat. In fact, she was also the first woman to receive such an honour from the army.

And on that note, we gear up to watch Gunjan Saxena’s story unfold on Netflix. Look out for the many displays of valour and breaking of stereotypes. We hope the movie does justice to the real life hero. Do let us know what were your favourite moments.

#SelfLove: 10 Ways To Be Your Own Best Friend

Video: 5 Ways To Stay In A Positive, Go-Getter Mindset While At Work