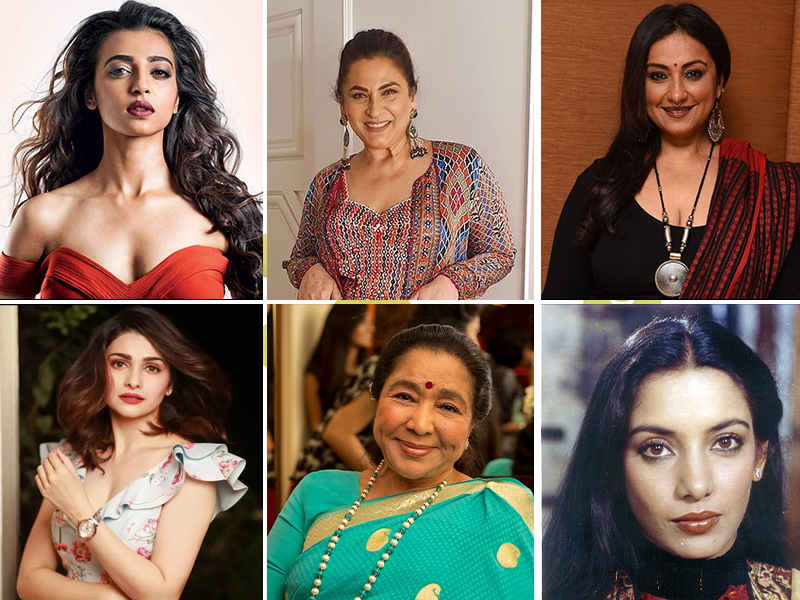 Women are amazing, they are beautiful, powerful and inspiring in all the things they do. Women truly are bosses who can lead and can create waves in any industry. Not only shattering glass ceilings, but they can also roll out the red carpet and pave the way for future generations. Now is the time to celebrate awe-inspiring women who have done remarkable things in their respective fields be it Asha Bhosle for giving us our all-time favourite melodies or Shabana Azmi who proved that women can achieve anything they set their hearts on!

Known for being Netflix’s favourite actress Radhika Apte was born on 7th September 1985. She turned 36 this year and we can proudly say 36 never looked so good. Radhika has the same spirit as an actor in her 20s and she continues to give her very best in any role she signs up for.

Based in Mumbai and London with her husband Benedict Taylor, Radhika has successfully built her film career without having a lot of contacts in the industry, initially. One of the most talented actors in India, we are all in to see Radhika grow more and more.

Asha Bhosale and melody are almost synonymous. The Indian playback singer celebrates her day on 8th September every year. She has sung over 12,000 songs in her career of 7 decades and still is one of the most melodic voices in India.

With songs like Chura Liya Hai Tumne Jo Dil Ko, Asha Bhosale really stole our hearts as she continues to do so at many occasions and events.

Prachi is an Indian actor who you might recognise from the movie Bol Bachhan as it was quite a hit. Prachi was born on 12th September 1988 and was a Television star before she started her movie career. She had gotten the lead role in Ekta Kapoor’s daily soap called Kasamh Se.

She has won several awards for her television acting and then she even participated in Jhalak Dikhla Jaa to steal heart with her dance moves. Her role in the movie Once Upon a Time In Mumbai shows us what a talented actress she is. Her journey teaches us how to step on the ladders of success slowly but visibly.

A theatre actress, TV star and a successful movie actor, there is no one who doesn’t know Shabana Azmi. She has won various prestigious awards for her movies, most of them being the Best Actress Awards. Born on 18th September 1950, she started her acting journey after graduating from FTII in 1973.

Azmi’s first film Ankur became a huge success even though she wasn’t the first choice for that film. She became a sensation after that as she won several best actress awards for the same film. Her journey shows that if you are good at your art you can overcome any obstacle.

One of the most versatile actors, Divya Dutta has shown us how to evolve with time. Born on 25th September 1977, Divya started with modelling before she ventured into cinema. We remember her for her role in Bhaag Milka Bhaag when she played Milkha’s elder sister and her performance was remarkable.

Dutta says her inspiration to work hard is her mother as she single-handedly brought up Divya and her brother while having a full-time job as a doctor. A small-town girl from Punjab now is one of the best actresses and we can’t be more proud of her.

Archana is majorly known for two things, her character as Miss Braganza in Kuch Kuch Hota Hai and her epic laugh as a comedy show judge. When it comes to actresses in Comedy films Archana’s name pops up first. She has been judging Comedy Circus since 2006.

She is one of the most talented comedians in the country and even though we don’t see her as much in movies right now, she will always be an inspiration for women who want to pursue careers in comedy.

These are some of the most inspirational women in India who were born in September. Do you have any more of them in your mind? Let us know in the comments why you find them inspiring.

Will you be celebrating yet another birthday in the pandemic? We say it doesn’t have to be boring! Here are some entertaining ways to make merry while following the rules.

Lawyer’s Take: Legal Steps You Can Take If Someone Releases Private Or Intimate Photos Without Consent

10-Step Guide To Starting A Jewellery Business From Home