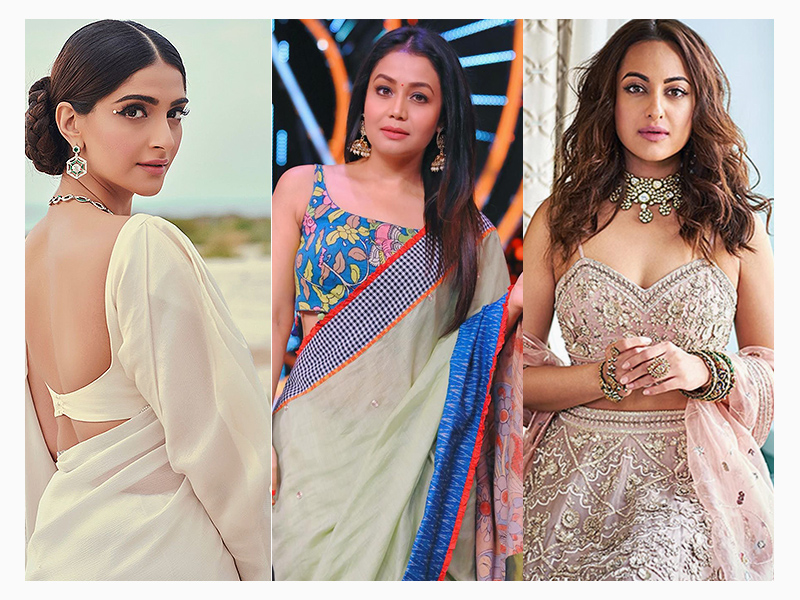 One cannot ignore the overwhelming presence of remarkable women in every industry. As a young woman, it is truly encouraging to witness the work of strong women breaking stereotypes and emerging as the best in their fields. Women truly are bosses who can lead and can create waves in any industry. Not only shattering glass ceilings, but they can also roll out the red carpet and pave the way for future generations. Here are 12 amazing women born in June that are truly inspiring!

12 Indian Women Who Inspire A Generation & Beyond!

Nargis is one of the most remarkable actors to grace the Indian screen. First, as the muse of actor and filmmaker Raj Kapoor in several hit films and later for her iconic role in Mother India, Nargis has sealed her place in the annals of Indian history and the hearts and minds of millions of Indians. Her talent, beauty and grace made her stand tall among her contemporaries.

She made her first film appearance in 1935, aged only 5, in a film called Talash-e-Haq. She made her debut as an adult in the 1943 film Taqdeer, aged 14, opposite Motilal. She would later go on to work with Raj Kapoor in several celebrated films. She could play an ageing mother (Mother India) and a spoilt city brat (Andaz, 1949) with equal ease. She went on to work in many films and many of her films with Raj Kapoor are counted among Hindi cinema classics.

Actress Sonakshi Sinha is celebrating her birthday on June 2. Daughter of actor-turned-politician Shatrughan Sinha, she made her debut with Salman Khan in Dabanng, 2010 with her iconic dialogue, “Thappad se darr nahi lagta sahab, pyar se lagta hai.” The action-comedy provided a good platform for her career, and since then Sonakshi has appeared in several hits such as Rowdy Rathore, Son Of Sardaar, R… Rajkumar, Holiday and many more.

Initially being typecast as a ‘masala’ movie heroine, her performance in the 2013 period romantic drama Lootera was praised by critics. However, her later attempts at doing socially relevant films such as Akira in 2016 and Noor in 2017 didn’t produce desired results. Nonetheless, the actress over her 10 years in Bollywood has delivered some unforgettable dialogues.

There’s no one like Neena Gupta. The actress, at 62, is defying age and breaking rules, all this while having a whole lot of fun. She won the National Film Award for Best Supporting Actress for playing a young widow in Woh Chokri (1994). Neena Gupta had worked in films like Mandi, Utsav and Trikaal before she got pregnant and took a break from acting.

Afterwards, she made an impressive comeback with Ayushmann Khurrana’s Badhaai Ho for which she won the Filmfare Critics Award for Best Actress and received a nomination for the Filmfare Award for Best Actress. She was last seen in Sardar Ka Grandson. She has a film titled Dial 100 and the second season of Masaba Masaba lined up. Neena Gupta has added yet another feather to her cap. She recently penned her autobiography titled Sach Kahun Toh, her first-ever book and gave fans a close look at her life.

Neha Kakkar is an Indian singer. She began performing at religious events at the age of four and had participated in the second season of the singing reality show, Indian Idol, in which she was eliminated early. She made her Bollywood debut as a chorus singer in the film Meerabai Not Out. She rose to prominence with the release of the dance track, ‘Second Hand Jawaani’ from Cocktail, which was followed by several other popular party songs including ‘Sunny Sunny’ from Yaariyan and ‘London Thumakda’ from Queen.

In 2019, Kakkar was listed among the most viewed female artists on YouTube with 4.2 billion views. In January 2021, she became the first Indian singer to win a YouTube Diamond Award. In December 2020, she appeared on the list of Asia’s 100 Digital Stars by Forbes.

TV Czarina Ekta Kapoor is undoubtedly one of the most successful star kids in the industry. Born to veteran actor Jeetendra and Shobha Kapoor, Ekta has the most amazing career as a producer. She moved to the top of an industry that has been dominated by males for decades. Thanks to Ekta, we got shows like Hum Paanch, Kkusum, Kyunki Saas Bhi Kabhi Bahu Thi, Kahaani Ghar Ghar Ki, Kasauti Zindagi Kay, Kasamh Se, Pavitra Rishta, Bade Achhe Lagte Hain, Naagin, Yeh Hai Mohabbatein, and many more. Not just these she has even entertained audiences with her films like Once Upon A Time In Mumbaai, Shor In The City.

Dimple Kapadia was all of 16 when she became an overnight star with the 1973 film ‘Bobby’. Soon after the success of the film, she quit the industry to marry superstar Rajesh Khanna. She raised her two daughters Twinkle Khanna and Rinke Khanna and made a comeback to films after a decade. In the meantime, she separated from Rajesh Khanna and came back to her parents’ home with Twinkle and Rinke.

On the professional front, her return to showbiz proved successful for her with films such as ‘Saagar’, ’Aitbaar’, ‘Arjun’, ‘Ram Lakhan’, ‘Batwara’, ‘Kaash’, ‘Rudaali’ and ‘Lekin’. She continues to star in movies and has recently been part of films such as ‘Dabangg’, ‘Patiala House’, Finding Fanny’, ‘Cocktail’ and ‘Angrezi Medium’. She has two big films – Christopher Nolan’s spy thriller ‘Tenet’ and Ayan Mukerji’s ‘Brahmastra’ – in her kitty.

Shilpa Shetty is celebrating her birthday on June 8. Actress, producer, model and entrepreneur, she is a woman who dons many hats. She won her fans over with her acting skills as well as her dancing brilliance. She started her career in showbiz with a commercial advertisement for Limca. Ever since Shilpa stepped into Bollywood with the Shah Rukh Khan-starrer Baazigar, she has only been charming her audiences. One of the fittest actresses in the country, Shilpa is widely acclaimed for her superlative dancing skills.

Shilpa Shetty is making her comeback to films after a gap of 13 years with Sabbir Khan’s Nikamma. She will also be seen in Hungama 2, co-starring Paresh Rawal, Meezaan Jaffrey and Pranitha Subhash.

Bollywood’s fashionista Sonam Kapoor Ahuja turned a year older on June 9. Kapoor, the daughter of actor Anil Kapoor, began her career as an assistant director on filmmaker Sanjay Leela Bhansali’s 2005 highly acclaimed drama Black. She later made her acting debut in Bhansali’s romantic drama Saawariya in 2007 and had her first commercial successes with the romantic comedy I Hate Luv Storys and the ensemble romantic comedy-drama Aisha. Kapoor supports raising awareness of breast cancer and LGBT rights. Known in the media for her outspoken personality, she is frequently credited as one of India’s most trendy celebrities.

Her highly acclaimed portrayal of Neerja Bhanot in the 2016 biographical thriller Neerja won her the National Film Award – Special Mention and a Filmfare Critics Award for Best Actress, and she followed it with a starring role in the 2018 female buddy film Veere Di Wedding, both of which rank among the highest-grossing female-led Hindi films. Sonam Kapoor was last seen in the 2019 movie The Zoya Factor.

Disha Patani is best known for starring in films such as Baaghi 2, co-starring rumoured boyfriend Tiger Shroff. She played her first leading role in the film Loafer (Telugu) 2015, Directed by Puri Jaganath. Disha first Bollywood debut was with the movie M.S Dhoni: The Untold Story released in the year 2016, starring opposite Sushant Singh Rajput. She also won an IFFA Award for Star Debut of the year Female, Screen Award for Best Female Debut, and Stardust Award for Best Acting Debut for the movie.

Disha Patani also did a music video opposite Tiger Shroff which has received 32 million views on YouTube. She was part of Jackie Chan’s movie project Kung Fu Yoga in the year 2017. The actress was also seen in Mohit Suri’s action-thriller Malang, co-starring Anil Kapoor, Aditya Roy Kapur and Kunal Kemmu.

Kirron Anupam Kher is an Indian theatre, film and television actress, singer, entertainment producer, TV talk show host and a member of the Bharatiya Janata Party. She is the cool millennial replacement of the tragic Bollywood maa trope. The love for Kirron Kher as a Bollywood mom is universal. In 2009, she also appeared as a judge on India’s Got Talent. Her naturally affable demeanour on-screen was instantly appealing to a generation that was making its way forward with newer media contraptions, changing social culture and demand for relatable entertainment.

The veteran actor is much more and far beyond her many roles as the quintessential filmy maa, but there is truly no match for her screen presence when she steps into those shoes. She has won 2 national film awards, 2 international film festival awards for the best actress in Khamosh Pani (Silent Waters). She is currently being treated for cancer and we hope that she will come out of this stronger than before.

Reema Lagoo (1958-2017) has routinely been described as Bollywood’s favourite mom! Lagoo was a consummate actress whose career spanned theatre, television and cinema and different genres, but she will be best known for playing the matriarch of numerous stars over the decades. She began acting on the stage while in school. Apart from appearing in plays, she began acting in Marathi and Hindi arthouse films in the 1970s, such as Jabbar Patel’s Sinhasan (1979).

One of the first to break the Kapoor stereotype, Karisma not only entered showbiz but also made it big there. Her passion and scintillating looks made her one of the most prominent stars of the 90s. However, very few of us are aware of the price she paid for this. Karisma allegedly dropped out of school soon after she entered sixth standard to pursue acting. Her first film was Prem Qaidi which released when she was just sixteen. And today she is known as one of the most iconic personalities onscreen. Over the years she has emerged as a trendsetter. She was reigning as the Queen of Bollywood with back-to-back hits and many high-end endorsements.

While these June women have taken the world by storm, let us draw our inspiration and make our mark in the world. They have taught us that we don’t have to go with the flow but against the current, if we are passionate about something! Let us uplift ourselves and fellow women of the world to great heights.

30 Coffee Recipes To Savour That Delicious Kick Of Caffeine