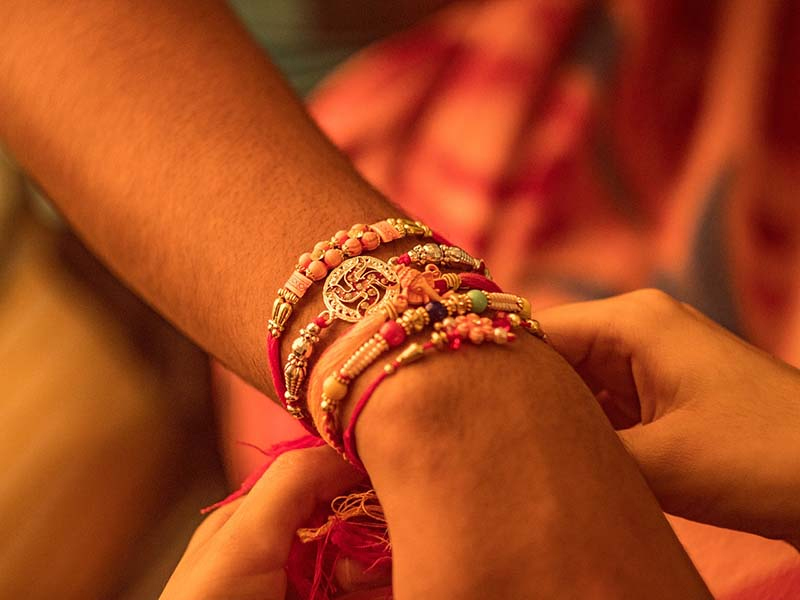 If your heart really throbs looking at the wonderful brother-sister relationship Ayesha and Kabir had in Dil Dhadakne Do and you love the caring relationship between Sandy and Krishna Rao from Housefull chances are you love your sibling and Raksha Bandhan is a very special occasion for you. In India, Raksha Bandhan is celebrated with a bang! All your brothers and sisters, as well as cousins, meet and then the rakhi ceremony happens, there are a lot of sweets and everyone seems so happy. The atmosphere of Rakhi is just lovely.

As we all know, the world has changed. Everyone is super conscious about their health all the time and travelling to see our beloved siblings will get difficult for some of us. But this nowhere changes the bond of a brother and sister. If you live with your sibling or not, we hope you have a great Rakshabandhan, even if it’s virtual.

Rakshabandhan is celebrated in the month of Shravana that happens to be mostly in July-August. While the whole idea behind this festival is that brothers will protect their sisters in today’s age you can see sisters tying rakhis to each other taking an oath on protecting each other. Coming to the best part of Raksha Bandhan – the gifts! The brother is supposed to give a gift to the sister with sacred emotions and well wishes. But this only happens when you tie a stunning rakhi on his wrist.

This year we’ll celebrate on the 22nd of August 2021 and the best part is it’s a Sunday. While the whole family is going to come under a roof to celebrate, do you know what is the story behind Raksha Bandhan? Here are 5 mythological stories that have made Raksha Bandhan festival an important festival in India.

You might have heard of how Lord Krishna saved Draupadi from getting humiliated in King Dhritrashtra’s court. Well, that has a backstory to it, as it is believed that once Lord Krishna has cut his finger due to something. While all the people present there ran to fetch him a bandage including his own wife. Draupadi tore a piece of her saree and tied it on his finger. To this, Lord Krishna said “Akshyam” which translates to “may it be unending”. This was the blessing that rescued her from being disrobed in front of everyone present in the court by making her saree endless.

As written in the Bhagavata Purana and Vishnu Purana, Bali had requested Lord Vishnu to live with him in his palace after he had defeated Bali. While Lord Vishnu accepted the request, Lakshmi was not happy with it. So she went to Bali in disguise and tied him a rakhi. And like any brother, Bali owed Lakshmi a gift so when asked what she wanted. She pointed out she wanted Bali to free Lord Vishnu from his request of living with him in his palace.

If you already don’t know, Yama (the god of death) had a sister, Yamuna. Yamuna was disheartened as her brother didn’t visit her for about 12 years. She was sad about the same so she shared her sorrow with Ganga, mentioning that she misses Yama and she wants to see him. Ganga conveyed this to Yama and then he planned a visit to Yamuna. Super happy about seeing her brother after 12 long years, Yamuna had done a lot of preparations for Yama’s visit. She then tied a Rakhi on Yama’s wrist and as Yama was very moved to see his sister’s affection for him he blessed Yamuna with immortality.

This is the story of how Lord Ganesha’s sons Subha and Labha got their sister Santoshi Maa. When Manasa was tying a rakhi on Lord Ganesha’s wrist, both of his sons got mad. They had a reason to be angry and that was even they wanted a sister to tie a rakhi on their hands. Narada got involved in this and convinced Lord Ganesha that his sons would really enjoy the company of a sister. Lord Ganesha then created Santoshi Maa from the divine flames that emerged from his wives Riddhi and Siddhi.

Parvati had longed to marry Lord Shiva for the longest time. But as Lord Shiva was still mourning his wife Sati’s death he rejected Parvati’s marriage proposal. Lord Vishnu then promised Parvati that he will make sure she gets married to Lord Shiva. After all, he owed it to all the Rakhis Parvati had tied to Lord Vishnu. When Lord Shiva and Parvati got married, Lord Vishnu was the one to perform all the rituals.

All of the above stories make us realise how special the festival of rakhi is and how sacred of a bond a brother-sister has. If your siblings don’t know of these stories, you can definitely do a storytime this Rakshabandhan and you’ll have something to talk about.

A lot of people aren’t able to meet their siblings because of various reasons. And if that’s the case with you, don’t worry you can still have a happy Raksha Bandhan. Here are 15 ways you can have a very special celebration of Raksha Bandhan even if you can’t be in the same room. Happy Raksha Bandhan to you!

Also a fan of Panchatantra stories? Read some here.

9 Homemade Nutella Recipes That Your Kids Will LOVE!

Birth Control 101: Picking The Method That’s Right For You

8 Reiki Mythbusters That Bring Out Its True Essence