More
Life10 Facts About Dussehra We Doubt You Knew!
Advertisement

10 Facts About Dussehra We Doubt You Knew! 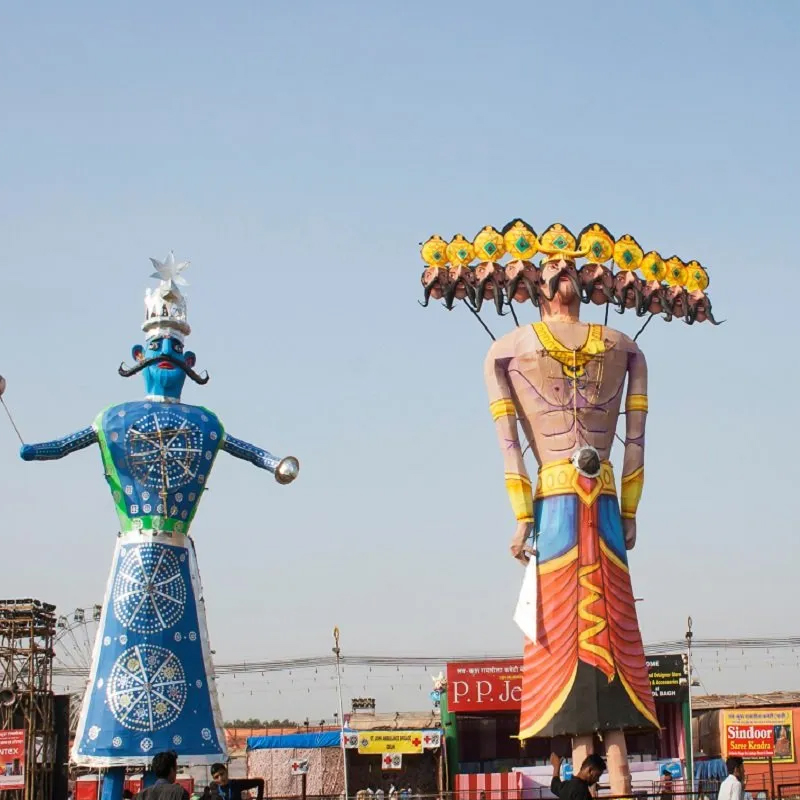 Waking up early in the morning, wearing new clothes and welcoming home goddess Laxmi are a few Dussehra traditions most people follow. But the biggest ritual of this festival that marks the end of Navratri is the burning of an effigy of Ravana. Dussehra was first celebrated to mark the victory of Lord Rama over Ravana. It was the day when Lord Rama defeated Ravana after a long battle in Lanka. We bet you knew that already, but how many facts about Dussehra do you really know? TC46 lists down 10 truths about the festival you should know.

10 Dussehra Facts You Should Know

1. The Defeat Of The Sun

Dussehra comes from the Sanskrit word Dash Hara, which translates to ‘the defeat of the Sun’ in English. According to Hindu mythology, if Lord Rama had not defeated Ravana, the Sun would have never risen again.

In some parts of India, Dussehra is also called Vijay Dashmi, which means victory on the tenth day. It is celebrated as Vijay Dashmi to mark the victory of Goddess Durga over the Demon King Mahishasura.

Dussehra also marks the end of the season as we finally bid adieu to summer, and it’s time for the winter season. It is a popular belief that there is a nip in the air after burning the effigy of Ravana. The festival also marks the harvesting of kharif crops and sowing of rabi crops. It’s an important occasion for farmers of all beliefs.

Ramleela or ‘Rama’s play’ is a performance of the Ramayana epic in a series of scenes that include song, narration, recital and dialogue. It is performed across northern India during the festival of Dussehra, held each year according to the ritual calendar in autumn. On the final day of Dussehra, the scene of Lord Rama defeating Ravana takes place. To mark the end of Ramleela, an effigy of Ravana is burned. The grandest Ramleela is held in the Ramleela Maidan of Delhi.

Buddhists celebrate this day as Ashok Vijayadashami, as it is believed that Mauryan King Ashoka was converted to buddhism on this day. It’s also the day that Dr Bhimrao Ambedkar converted to Buddhism in 1956.

Dussehra is not only celebrated in India but also Bangladesh, Nepal and Malaysia. It is a national holiday in Malaysia. Dashain, also known as Bijaya Dashami, is the grandest, longest and most auspicious festival in Nepal. In addition to worshiping the Goddess Durga, the people of Nepal will hold celebrations for the fertility of the land and a year of good harvest.

It is believed that the first grand celebration of Dussehra took place in the Mysore Palace, Karnataka in the 17th century at the orders of then King, Wodeyar. Ever since then, Dussehra has been celebrated with grandeur across the country. Today, in Mysore, the Jambu Savari or the Elephant procession is one of the most prominent events of this festival. Goddess Chamundeshwari is worshipped on this day, and a grand procession of her idol is taken out across the city.

Dussehra also marks the homecoming of Pandavas from their exile of 13 years. When the Pandavas had lost their kingdom, they were in exile for 12 years. It was said that if they were discovered in the 13th year, they would have to start their exile all over again. So, on the commencement of the final year, they hid all their weapons inside the hole of a Shami Tree. After the end of the 13th year on the sacred day of Vijay Dashmi, they retrieved their weapons to worship them along with the tree. Thus, the Shami Tree is considered to be a symbol of goodwill.

There are many such rituals associated with Dussehra, followed in various parts of the country. One such practice followed in Maharashtra is the gifting of “gold” during Dussehra. If you know anything about celebrating the festival, you may be familiar with the ritual and know it doesn’t have anything to do with the precious metal. The leaves of the Apta tree, whose scientific name is Bauhinia racemosa , also known as the Bidi leaf tree, play a significant part during Dussehra celebrations. It’s a custom to exchange Apta leaves, calling it ‘sona’ or gold, during the festival. The tree is often called ‘sonpatta’, literally meaning gold leaves.

The burning effigies signify the killing of all evils of the soul, which are represented by the ten heads of Ravana. Each of his head stands for an evil:

Dussehra is a grand celebration of the victory of good over evil. And it’s a great opportunity for family and friends to come together. Let us know what your Dussehra plans are in the comments below.

Expert Talk: 15 Medical Symptoms That Have Indians Turning To Homeopathy For Long-Term Relief

6 Things To Know About Using A Menstrual Cup, By Gynaecologist Dr Tomar

How Too Much Or Too Little Exercise Affects Your Fertility