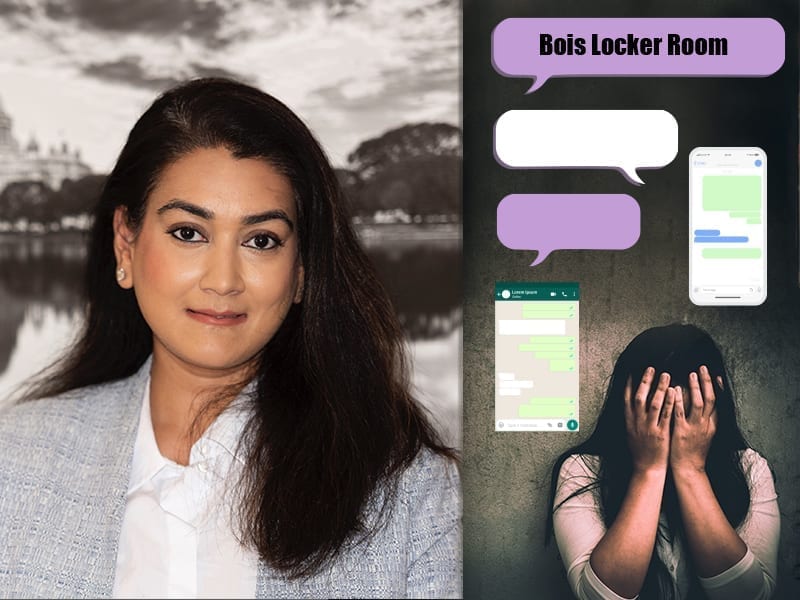 The Locker Room Incident is not just about an unhealthy concept of masculinity, but also the fabric of society which is a bystander to the prevalent notion “boys just, are this way.” In other words, it means, “accept this happens and ignore this behaviour. You cannot do anything about it.” It promotes the idea that it’s acceptable for boys and men to talk in such a manner. It magnifies a stereotype that “this is how men are”, whilst marginalising all those men who are nurturers and protectors.

Children begin to learn respect, values and treating people by observing grown-ups around them and being taught the same. When adults share derogatory humour about women and objectify them, it makes an impact on a growing child and adolescent. It has become quite common for adults to openly indulge in victim-blame, body-shame, objectification of women, with impressionable young minds. These adults who are role models for the young boys with the power to influence, end up imprinting inappropriate attitudes.

Movements such as #NotAllMen are so powerful. It demonstrates to all youngsters and especially boys that this is by no means acceptable behaviour and representative of all men. There are a lot of men who are protective, respectful and caring towards women. When young boys see adult men state that they have never engaged in or would never tolerate such behaviour, it can make a strong impact. These men are laying foundations of positive behaviour for the younger generation.

What Face Of Society Has Been Reflected By This Incident?

Society at large, being a silent bystander is in fact, perpetuating this social evil of sexual assaults towards women. The unacceptable ways of speaking and behaving get brushed under the carpet. But, when it comes to safety the flag-bearer torch (read judgement) is flashed on the victim of sexual assault, cyber harassment, rape –

Most women can testify to hearing such statements at some point or the other. In essence, putting the responsibility for safety only on the woman.

As a society, we need to be compassionate to the victims and steer away from ‘Victim-Blame’.

A lot of parents, young girls and women are extremely shaken up and fearful by the gross act of these groups of boys. Here are some things to keep in mind, while talking to someone who may go through this:

In this day and age, when people take up a career on social media like blogging, and creating vlogs, images are certainly not shared with the intent to be sexually objectified and being misused. We absolutely cannot blame the girls who were victims of the ‘boys locker room’ or other incidents. Approval needs to be taken for reproducing pictures. But consent isn’t something we talk about enough!

Have Conversations With Your Son And Daughter

When you are home together, set time aside every week to talk about online safety, cyber-abuse & bullying, sex education, consent, respect, uncomfortable touches, and so much more. With this method in place, it will get easier to talk about these so-called awkward matters. The topic of sex will be free of indecent intrigue. The notion that sex education promotes sexual activity is untrue; there is evidence in psychological research. So parents, stop fearing and start educating! Start having such conversations at home with your children. Don’t rely on school or another person to do so. In passing the buck on to the next, the young teenager scrambles for information from friends and online, which is entirely unfiltered and unreliable.

Consent and respect need to be an integral part of value educating our youngsters and adolescents. Showing respect and taking permission is required for the digital world as much as the real world. As a parent, you must firmly communicate the importance of being authentic selves online and offline.

In Conclusion, we need an immediate attitude shift collectively as a society. This needs to percolate across all of India and there is no better way than raising awareness and education on the subject. Policymakers, law enforcement, school and college education systems need to unite and implement actionable plans. Indecent and derogatory behaviour should not be brushed away as a “hormonal teenage boy” issue. That should no longer be the prevalent notion. In recent years the public outrage reflects a shift, but we need to do a lot more to eradicate it. To all citizens of India, we need to come together and take active measures to ensure a safer world, one that is digital and real….not only for us but the generations ahead.

Shubhika Singh is a Kolkata-based Psychologist. She received her education in the UK and has been practicing for over a decade. She is the Founder of New Leaf: Mental Health & Well-Being & recently launched InnerKraft.com. She provides mental health support to individuals and consults at various organizations to create empowering change)

Self-Starter: Sakshi Malhotra On Launching A Holistic Skincare And Wellness Brand During The Pandemic

#DIYLife: How To Groom, Shape & Maintain Your Eyebrows At Home