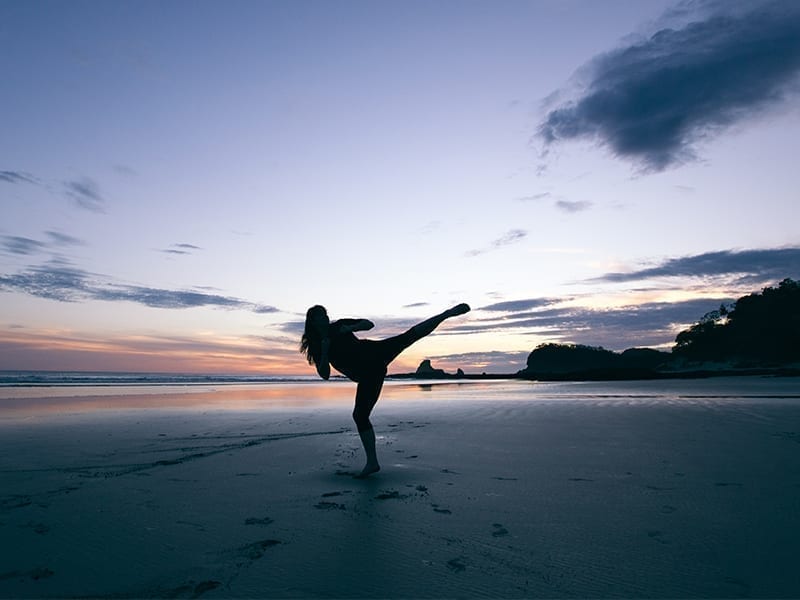 Women today are becoming more independent and self-reliant. From living alone to travelling solo, there is nothing a woman can’t do. However, we are still decades away from an era where women don’t need to be scared of walking down a deserted lane or not thinking twice before wearing certain clothes. Hence, until we have reached that time where we don’t need a #metoo movement, we as women need to learn some self-defence moves to continue our independence without fear.

Self-defence and martial arts is not the same thing. However, most forms of martial arts have evolved into self-defence techniques. Anybody can learn basic self-defence skills, even someone out of shape, overweight, disabled and even those who have a small physique. Martial arts, on the other hand, are a form of exercise and can get you in shape.

There are several types of martial arts – armed and unarmed. All of them have beginner to advanced levels. Let’s discuss some basic level unarmed martial art types that can be used by any woman at any time.

Krav Maga roughly translates to ‘unarmed combat’ or ‘contact combat’. It is one of the best martial arts for self-defence. Developed and used by the Israeli Defence Force, Krav Maga is combined from several other forms of martial arts like Boxing, Karate, Jiu-Jitsu, Wing Chun, Muay Thai, Aikido, Taekwondo, Judo, Street-Fighting and it’s the only martial art that is in continuous development. Krav Maga for self-defence doesn’t focus on fighting as much as taking preventions and being aware; it’s not about winning a fight, but doing enough to getaway. The main principle is – avoid, prevent, deescalate, defend, fight if necessary, and run. It emphasises on real-situations and how to use the body’s natural reactions and instincts to defend, making it effective for anyone irrespective of size, strength and level of fitness to execute this. You are taught the vulnerabilities of the attacker like eye-gouging, foot stomps, and kicks to the groin. They are all practised effectively and repeatedly so it becomes your body’s second nature. It is also one of the fastest forms of martial arts to learn for self-defence. Krav Maga also teaches defensive techniques against weapons.

Muay Thai, also known as ‘The Art Of Eight Limbs’, uses elbows, fists, knees and legs to fight. It is also known as Thai Boxing or more commonly known as Kickboxing. This is a great martial art to learn for self-defence as well as a form of exercise to get fit. Unlike kickboxing or any other form of martial art, Muay Thai teaches one to also use knees, shin, and elbows to attack. It’s not a very easy art to learn, but once you do, you could seriously injure your attacker and buy yourself enough time to run away. It teaches you a variety of techniques such as jabs, hooks, uppercuts, superman punches, cross punches, straight kicks, shin kicks, knee strikes, elbow strikes, and much more. It even teaches you round kicks, which take out the legs of your attacker without letting him get too close. Advanced levels of Muay Thai also teach defending oneself from weapons such as knives.

There are two kinds of Jiu-Jitsu in martial arts. One is the Japanese and the other, gaining more popularity is the Brazilian Jiu-Jitsu. It’s a form of fighting that was developed when weapons were unavailable or ineffective.

However, a drawback to Jiu-Jitsu is being unable to defend oneself when in contact with a weapon like a knife, or when attacked by a group.

Keysi is often described as a Spanish street fighting style of martial art. It is particularly designed for defending against multiple attackers. It emphasises using our body as a weapon and it doesn’t consist of any kicks. Instead, it teaches a variation of hammer fists, sharp elbow strikes and head butts, all that are proven to be more lethal than punches and kicks in real-life situations. The Keysi Fighting Method was distinctively used in Christopher Nolan’s Batman Begins.

Judo is a Japanese form of martial art that translates to, ‘a gentler way’, which may be confusing considering it’s a fighting style. But as the name suggests, it focuses less on attacking and more on redirecting and disarming. It doesn’t teach any blocks or strikes but it will teach you to do maximum damage with very fewer efforts. Techniques to throw, pin, choke, grapple, and arm-lock will be taught. In Judo, the majority of the lessons will be on how to throw down your attacker, in a way that can cause some serious injuries.

Boxing is one of the original martial arts and it is one of the most popular sports in the world. It focuses entirely on punches. It teaches you a variety of effective punches from different ranges with precision. You also learn how to evade or block an attack. Boxing sharpens your awareness, makes you quick on your feet, and enables you to make quick decisions in choosing which moves to use during a fight or an attack, which is of utmost importance on the street. It improves your instincts and reflex time.

The movie Karate Kid is sufficient to inspire someone to learn this Japanese fighting style. Karate translates to ‘empty hand’ that majorly teaches one to fight open-hand techniques such as palm-heel strikes and spear hands. It also predominantly teaches a striking art of punching, kicking, knee strikes, and elbow strikes.  Karate can increase a person’s physical strength. Anyone who has been trained in Karate can hit or kick exceptionally hard. It is a great way to become fit and at the same time, powerful. Karate is going to make a debut in this year’s 2020 Tokyo Olympics.

Mixed Martial Arts is a combination that takes the best of every martial art technique and blends them together. This style of fighting gives you an array of fighting styles and techniques to use when under attack. You can learn how to fight standing up, learning how to defend yourself on the ground, grappling, sparring, striking, leg and arm locks, and so much more. It prepares you for everything. The only downside is that it doesn’t teach you a lot about defending yourself from weapons.

6 Self-Defence Moves Every Woman Should Know

Other than learning martial arts for self-defence, below are some basic moves that you can start to learn and practice.

2. When You Are Pinned Down And Held By Your Neck/Chest

When the attacker pins you down and holds your neck or chest, you should grab his wrist with your opposite hand, and grab the back of his elbow with your other hand. At the same time, grab his leg on the same side of the trapped arm with your leg and angle your knee outwards. After you’ve grabbed his arm and leg, bridge your hips high and roll over to the trapped arm side. This will get you up, making him lose his balance. Once you are up, avoid fighting and run.

3. When You Are Pinned Down And Held By Your Wrists

When a man pins you down by holding both your wrists, you should form a bridge with your pelvis and throw him upwards towards your face, this will free your wrists as he tries to gain balance using his palms. While you are raising your pelvis, ensure your hands are on the side and your face is turned on the side – otherwise, his body will fall straight on your face injuring you. Next, swiftly hug him like a tree, burying your face in his chest, this is essential as his hands are no longer occupied holding your wrists and it’s free to punch your face. If the man has held your wrists straight above the head instead of the side, wiggle yourself up so his hands come on the side and you can follow the above steps. After the hug, you climb a little upward and grab one arm and toss him on his side, getting you on the top. If the arm is too strong, grab his wrist, and follow steps from point number This whole technique should take a few seconds; you have to be really quick.

4. Escaping When Held By Your Wrist

When an attacker holds you by the wrist, instead of pulling away and trying to get away, position your leg forward; the same leg as the trapped arm giving you a strong base to the ground, and move the arm towards the attacker’s body, so it becomes difficult for him to continue holding. If you try pulling away or breaking the grip, the attacker’s hold will only get tighter.

5. Escaping A Side Headlock

While escaping from a side headlock, move your head as close as possible towards the attacker, to avoid getting choked. And then, with your open hands, target his groin, and kick his calf down, so he falls on his knees.

6. During A Sexual Assault

During a sexual assault, convince the attacker, that you are exhausted and falsely surrender. The attacker is just waiting for his target to get tired, so he can have full control. Instead of actually exhausting yourself, pretend to be exhausted and completely surrender yourself to him. This will ensure him loosening his grips, adjusting his positions so he can go ahead with his plans. That is when you try and escape.

Women Helpline Number is 1091 and for domestic abuse, it is 181. Below are links to some additional numbers, categorised by states and type of abuse. Memorise them and feed them as speed-dials on your mobile.

10 Ways For Women To Initiate Sex With Their Partner