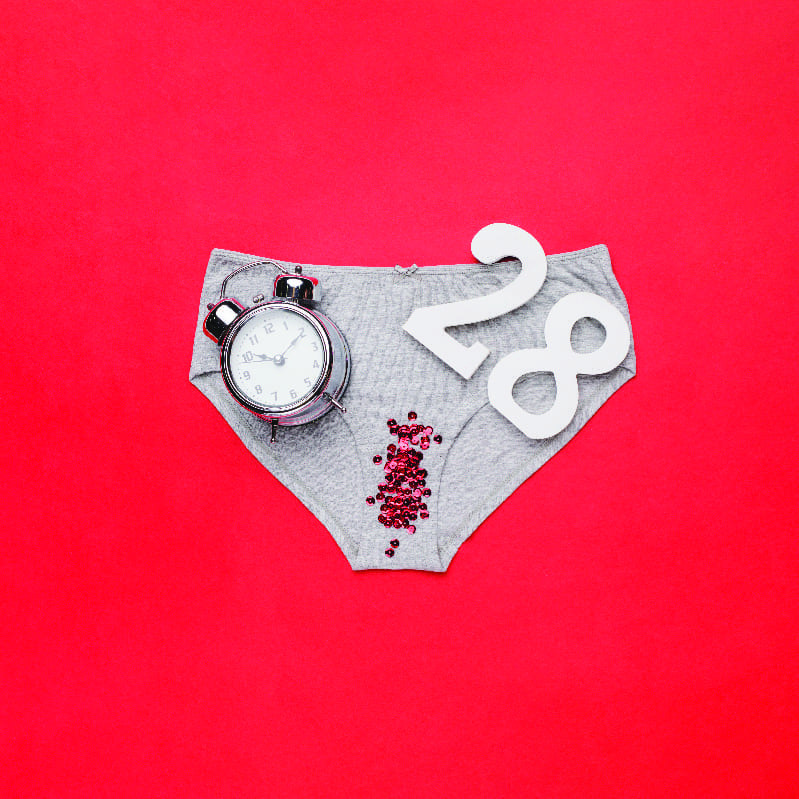 I still remember my first period. Or if I had to speak about it more dramatically – the onslaught of my womanhood. It was in school and I had gone to the toilet to pee when I remember seeing a sudden gush of red on my underpants. Coincidentally, I had seen a Bollywood flick the night before, where a woman kept vomiting blood repeatedly, only to learn that she was suffering from an incurable, terminal illness.

To my innocent eleven-year-old head, blood coming from the vagina, and blood coming from mouth probably meant the same. Putting two and two together, I automatically assumed I was going to die. My entire life of eleven years flashed before my eyes. I mumbled a frantic prayer to the Almighty. Dear Godji, please tell my daddy I love him. And tell mummy that she was right. You did punish me for not eating my veggies. And tell my sister, that no, even if I die, she is not to touch that brand new Barbie doll I received from my grandmother on Diwali.

Imagine my despair when all the clinic nurse did was smile at me, reassure me that I was going to be fine and give me a fresh skirt and a pair of underpants.

I wasn’t going to die? What a waste of an adrenaline rush.

At home that evening, my mother explained to me that what I had experienced was the commencement of a process called Men-stru-a-tion (pronounced Men-stru-yay-shon, repeat after me, I remember her saying). Or you can say period. They’ll understand. Which is when I realized that from now until what they called menopause, I’d have a friend coming to meet me each month. Except I wasn’t sure I looked forward to her visit. For Miss P. (as I chose to call her), came with some of her own best friends. A constant string of cramps. Niagara falls from my vagina that wouldn’t stop for almost a week. And a feeling of being bloated as though I’d eaten an entire sweet shop in one go. Though, as I came to realise, I could love her, or I could hate her. But I couldn’t ignore her, because her absence was more alarming than her visit.

Periods. Menstruation. Chums. That time of the month. Call it what you will. A perfectly normal, biological cycle designed for the female gender. One that reassures you that as a woman, you have a healthy body that is capable of producing babies. Of course, whether you want babies or not, is a completely different story altogether.

Except that in our desi world, we cannot budge an inch without making this a tamasha.

Tamasha No. 1 – Among the ocean of superstitions and rules our society has been bestowed with, there is a special category designated specifically for menstruation. Don’t touch the pickle, because you’re going to get possessed, Naani would say. Don’t shampoo your hair on the fourth day of your period else you’ll fall ill. No swimming. No exercise. Rest.

While I did, and still do, find all of this rather amusing, what gives me true goosebumps is what I hear about the period-related horrors that a gazillion women undergo in the rural parts of the country. Women being forced to use soiled rags, ashes, old cloth, newspaper and what not, in lieu of sanitary napkins. Not being allowed to enter places of worship because apparently, the Gods do not bless women when they are on their menstrual cycle. Some households even force their womenfolk to eat, sleep, bathe away from the rest of the household, because, you guessed it right, they are on their period.

Period, or Punishment, I ask?

Tamasha No. 2 –  The attack of consumerism. Remember those sanitary napkin commercials that promised you that you could wear white without sending your izzat down the drain? The ones that displayed rather repulsive digitised images of a pad with blue fluid (because red, which is the actual thing, is apparently taboo). Added to which, like I spoke about at elaborate length in an earlier chapter, the process of buying a sanitary napkin in the first place. Uncles subjecting the poor napkin to the torture of wrapping them in black plastic bags or brown paper. And feeling very happy about it, because they were sparing you of the supposed embarrassment of being seen in public buying products of feminine personal hygiene. If only uncle exercised that level of discretion when he went to take a leak in public instead.

Tamasha No. 3 – Of course our male counterparts thought that a woman on her period was the funniest thing ever. You seem rather snappy today. Is it that time of the month? You seem tired. You must be PMSing. But baby, why no sex? Does it hurt that bad? Be my guest, gentlemen. To that experience of seeing the toilet pan akin to a bowl of the bloodiest Mary you ever had. Of battling crampy pains, soreness, and lethargy for an entire five days. Of watching blood being drained from your vagina. Month after month after month. And please remember to tell me how it feels.

And Tamasha No. 4 is the complete ignorance our education system chooses to award to this subject. Our biology teachers will skip the chapter in our textbook, where the anatomy of a female is discussed in detail. Because sex education, and anything even remotely related to the female anatomy, is anti sanskaar. So boys will be clueless about what the menstrual cycle is, what a tampon looks like, and why they should be scared out of their wits should their girlfriends not get their periods.

In conclusion, all I can say is that when I finally do have my babies, they’d better thank me. For the nine months that went into creating them. And for all the other months that I spent dealing with all this period tamasha instead.

Blogging Tips: How To Create & Make Money From Your Blog

Buzz 46: Depiction Of Mental Health In The Fame Game (& Other Recent Bollywood Movies)