Buzz 46: 10 Fun Facts About The Republic Day Parade In India 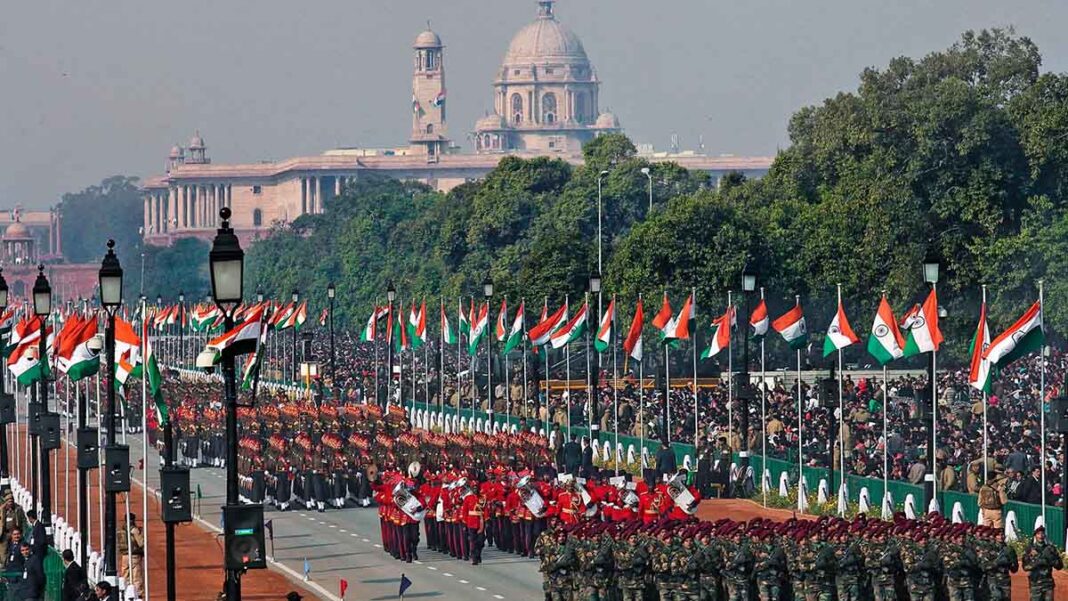 Republic Day, celebrated on 26th January of every year, is a reminder of the enforcement of the Constitution of India in the year 1950. The Constitution that is by far the most elaborate one across the globe, comprising 448 articles in 22 Parts, 12 Schedules, and 97 Amendments. No Republic Day in India is complete without the parade. The dynamic celebrations showcase our vibrant heritage, culture, diversity, and military strength, and are a mark of respect, love, and undying devotion for independent India.

Know more about 10 interesting facts that you probably didn’t know until now.

For the first four years after the enforcement of the Indian Constitution on Republic Day, the event did not have a fixed venue. It was held in various venues like Irwin Stadium, Kingsway, Red Fort, and Ramlila Grounds between 1950 and 1954. But not anymore! Given the grandeur and significance of the day, the event has been granted its current venue, Rajpath.

2. Indian Air Force was once called the Royal Air Force

It wasn’t until 1950 that the Royal Air Force came to be known as the Indian Air Force. Simultaneously, a new IAF roundel, which established India’s independence, was also adopted – the IAF as we know it today. The first batch of IAF comprised 6 officers, who were trained at Royal Air Force College, Cranwell, UK between 1930 and 1932. However, pilots inducted to the IAF were all trained at Cranwell till 1939. Technical officers were also trained in the UK, while airmen or technicians were trained at Aircraft Depot, Karachi, under strict supervision of British Non-Commissioned Officers.

3. The lion head from the Ashoka Pillar in Sarnath was adopted as the national emblem

The national emblem, officially referred to as the State Emblem of India post-independence, is inspired by the Lion Capital, built by Emperor Ashoka in 250 BCE, as preserved in the Sarnath Museum near Varanasi. The state emblem, as adopted by the Indian Government in 1950, shows three lions, the fourth being hidden from view as it faces the opposite side. The wheel at the centre of the abacus, with the bull to its right and the horse to its left completes the state emblem.

4. The parade concludes with a Christian hymn “Abide with me”

The Christian hymn by Scottish Anglican Henry Francis Lyte is played at the end of the parade. The hymn is believed to have been the favourite of the father of the nation, Mahatma Gandhi. Here is an excerpt from the hymn:

“Abide with me; fast falls the eventide. The darkness deepens; Lord with me abide. When other helpers fail and comforts flee, Help of the helpless, O abide with me. Swift to its close ebbs out life’s little day; Earth’s joys grow dim; its glories pass away; Change and decay in all around I see; O Thou who changest not, abide with me.”

5. Queen Elibazeth was the Chief Guest at the Republic Day parade in 1961

6. Hindi was declared as the national language of India on this day in 1965

7. 21 guns are fired after the President’s cavalier bodyguards salute the National Flag

However, the 21 guns are not fired using guns. In fact, 7 cannons of the Indian Army, referred to as 25 ponders, are used to fire these rounds. These cannons to themselves have an interesting story to tell. They were built in 1941 and employed in all official programmes where the Army is an integral part. The gun salute coincides with the playing of the National Anthem. The first shot is heard at the opening of the anthem, while the last shot is fired exactly 52 seconds later.

Each arm of the military – the Army, the Navy, and the Air Force covers 9 km each. On the other hand, the tableau moves at a speed of 5 km/hr approximately, with the drivers driving through a small window.

9. The parade preparations begin as early as July of the previous year

Considering the magnitude of the parade, the preparations for next year’s Republic Day begins in July. The participants are notified of their participation officially and they start with the practice right away at their respective locations, continuing the same till August. They are then called to perform at the event in December. The participants practise for 600 hours before the official parade is held.

10. Every detail matters to prevent losses to the organisers

The dynamism of the Republic Day parade implies that every detail matters. The shortest of delays and the minutest of mistakes cost the organisers heavily.

10 Cocktails Ideas For Your Next House Party