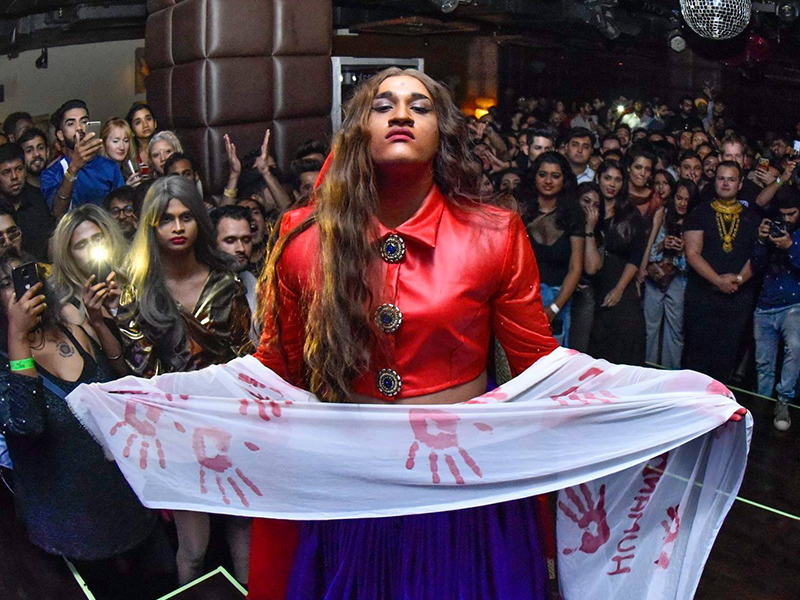 Anyone who’s been anywhere near Netflix knows RuPaul’s Drag Race and for a good reason. Though the series is American, the message it stands for and the idea behind it is universal – of acceptance. Drag Queen & King are not merely performances but identities that go beyond the stage. This section of the LGBTQ+ community needs all the recognition and support it deserves. In 2019, the annual India Makeup Show became host to a first of its kind drag show in the country called the Bombay Ballroom, where 11 different drag queens whipped up incredible performances. That was just a start that gave a platform to incredible artists, for more and more drag queens began showering the world with their exceptional talent.

And one name that’s been carved with love and admiration in the world of drag is Alex Mathew. With Maya, he is using his social media following and platform to empower online audiences, revolutionize conventional order and challenge the concept of societal labels. In conversation with TC46 for Pride Month, he shares what’s it like to be an open and proud queer cisgender man, how he set the stage with his performance as Mayamma or to most, Maya and his dragspiration.

1. What prompted the idea for Maya, The Drag Queen?

Maya the Drag Queen was an idea that struck me while I was watching Mrs Doubtfire. After watching the movie, I realised if Robin Williams can do drag, I can do it too. With that, I started my research on drag and gave more depth to my drag character.

2. What was your first milestone and how did you get there?

I think my first milestone would be my first public performance. I was able to perform for the Queer Arts Movement of India. They gave a platform to queer artists in India and I am grateful to them for giving me this opportunity.

3. How do you engage with people to create awareness and manage communities?

I give TEDx talks in colleges, head to schools to give sensitisation training. I believe the change has to start at the grassroots. Children aren’t conditioned about gender and sexual identities. They are open to learning. This is why I emphasise that sex education is vital to be learnt in schools and colleges.

4. What are your tips for an aspirant who wants to enter this space?

Just have fun and don’t take life so seriously. Be absolutely free and bold, use all the colours and be as colourful you can be.

5. Do you market online/offline? What works better for your project?

I think marketing my brand has always been about what I stand for and how true I am to myself. I believe both online and offline spaces have worked for me so far.

6. Which networking groups and showcasing events could help an aspirant meet the right people and generate work opportunities in this field?

Performing in any kind of safe queer spaces is the best way to go about it. Put the word out that you are performing and need more opportunities. Start networking in performing arts spaces and approach the right people.

7. How do you see India progressing with the acceptance of neglected communities, especially the queer and LGBT community?

It’s slowly gaining momentum. I am happy that the India I knew in 2014 and present India is totally different in terms of acceptance of neglected communities. But, we have a long way to go for full acceptance.

8. Have you always loved performing?

Yes. Of course. I am a theatre kid at heart. I love to sing, act and dance. I have been part of the theatre community since 2011.

9. Who’s your inspiration in the drag world and why?

I would say, Bianca Del Rio. This is because she is an Insult Comedian as a Drag Queen. She sells shows that are the size of an arena. She has made two movies to date. Of course, she is the lead in it. She is currently performing in a WestEnd musical known as Everybody’s Talking About Jamie. My aim is to do similar work like her.

Think you’re a Self-Starter or know someone who is? Drop us an email to be featured on The Channel 46 at [email protected]

We spotlight inspiring women who are entrepreneurs or have skill-based passion projects and are willing to share knowledge, advice and tips about getting started in the space. Each Self-Starter’s story will be highlighted in a prime slot on the Homepage for a whole week, after which their story will appear under the ‘Work’ category on The Channel 46.

10 Summer Skincare Tips From A Dermatologist