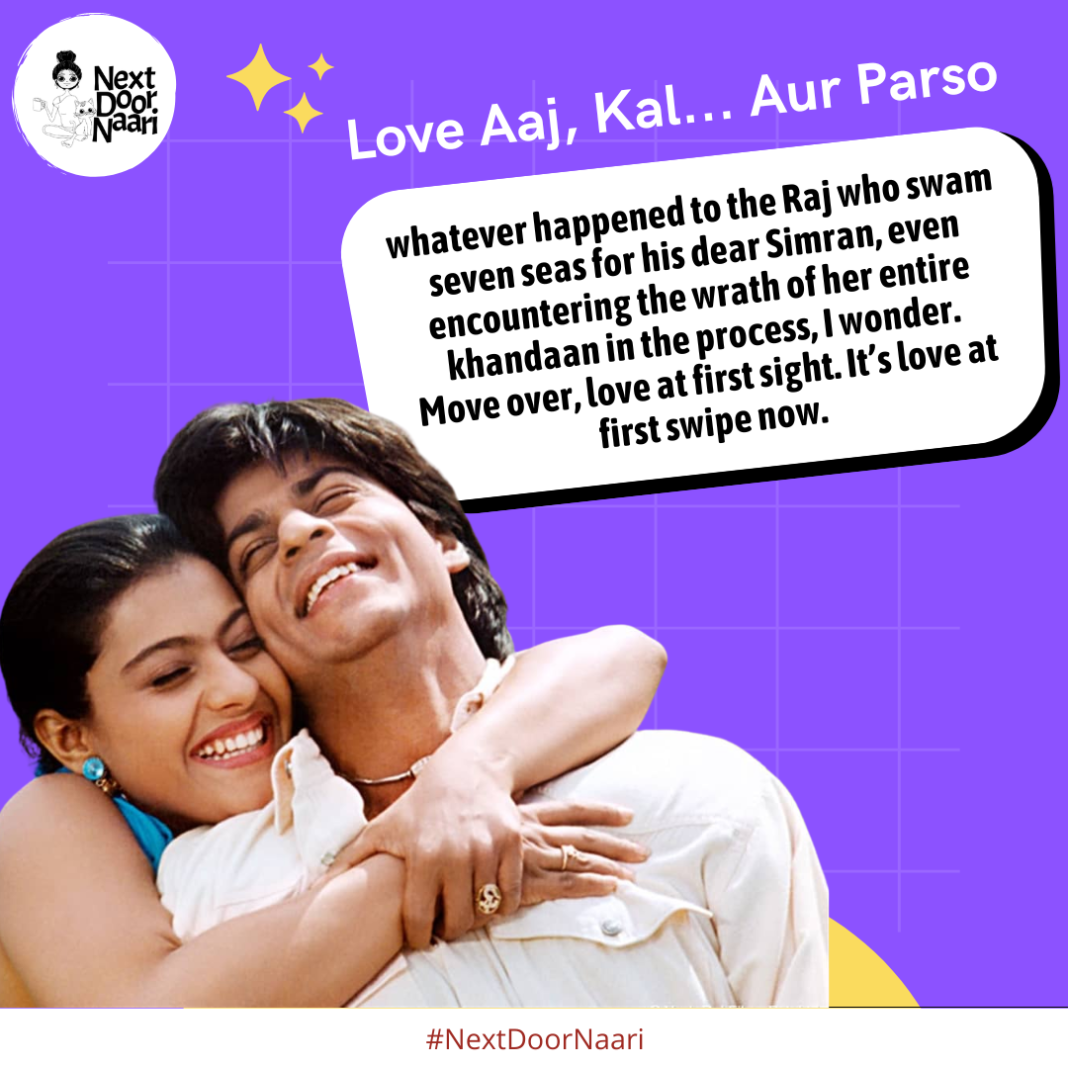 As a 30-something female, I can confidently say that I’ve been introduced to different kinds of love. So many kinds of love, in fact. From fairytale love to filmy love to technology-driven love. From Simran to Swipe-ran, shall we say?

Let’s start at the beginning. Right at the tender age when hearts and minds were still taking baby steps, our mommies and daddies introduced us to Cinderella, and Rapunzel as bedtime tales. Not knowing that they were inadvertently setting us up for a lifetime of failed expectations. We were fed stories of damsels in distress of Princes on white horses in castles. And somehow, we ended up imagining ourselves as Snow White and that a Prince Charming would come someday. Except we grew up. And outgrew our fantasies. Where would that castle be, Ma? I wished I had asked her. In Mumbai, where one learns to be fortunate enough for a pigeonhole-sized 1 BHK? Or in Delhi, where my precious castle would be darkened with the smoot of the city’s air pollution? Or maybe, Bangalore, where I’m sure my Prince would’ve made a U-turn because he didn’t want to be stuck in traffic on broken roads for two hours.

And then for all us desi folks, we always had Bollywood. Especially if you grew up in the 80s and 90s, where every story had pretty much the same plot. Boy meets girl. Girl meets boy. Boy is poor. Girl is a rich daddy’s princess. Girl’s daddy gets angry when he learns of his daughter’s affair. He forces her to marry the son of his rich friend a.k.a. villain. Boy fights. Then in a strange twist of events, the villain kidnaps the girl. Boy fights for his lady love, with the villain plus a bunch of goons. Girl’s father gives in. Girl and boy finally get married. A special mention of thanks to all the dogs, pigeons and glycerin brands here, for their invaluable contribution in helping the lovers unite.

And then there was a sub-genre within this filmy segment—the OTT love story as unfolded by Mr Chopra and Mr Johar. One where no love story was complete unless you wore fleeting chiffon saris, and danced on either the snow-covered slopes of Switzerland, or the mustard fields of Punjab, or the cobbled streets of Europe. One where your soul mate would be a perfect stranger named Rahul, Raj or Rohan who would walk up to you out of the blue. Accompanied by the instantaneous downpour of rain, the simultaneous playing of violins and the ringing of bells. To signal the arrival of your once-in-a-lifetime moment. And of course, your love story would culminate in a wedding worthy of the Gods to attend. Where you would be the ultimate vision, in a Manish Malhotra lehenga that was designed to put every other bride to shame.

All of this is fine, until the alarm clock rings, and every fantasy is put to rest. Almost like the bell comes with an inbuilt tone of sarcasm designed to smack you back to reality.

Fast forward to the 2000s, and in came the sudden wave of mankind’s eternal frenemy – technology. One that suddenly took over life, somewhere in our teenage years. Relationship statuses on social media. Stalking every crush on Facebook, Twitter, Snapchat, and Instagram, before a decision on whether I would go out with him or not was made. Subconsciously participating in the who-posts-more-selfies-with-their-significant-other contest, and whose-public-display-of-affection-is-cheesier competition. Oh, and making sure no announcement of an engagement, wedding, baby, another baby, yet another one, was complete without a photoshoot, a video, and some extremely corny status update to go with it.

But to get to this point, you had to get through the hunger games that were dating apps. The ultimate step to ensure that love (or companionship. Or boredom. Or just plain, simple lust in many cases) became driven by an algorithm. With a machine and modern day convenience suggesting who you should fall in love with based on geography. A by-product of the millennial practicality, I guess. After all, why swipe right on an eligible candidate in Chennai who wants shaadi, when you’re in Chandigarh, and actually just looking for a casual fling?

Now of course, there’s no taking away from the fact that dating apps were introduced for a reason. Move over ‘compromise’ of the 90s, the new C-word is ‘convenience’. Technology-driven matchmaking is the need for the busy bodies of this generation. Because, should you even explore something romantic with someone if they don’t get off work at the same time as you do? Or if they don’t have the same Zomato order? Or, even if their brand of feminism doesn’t match yours? Who has the time to fight these small everyday battles when life already feels like a war for Gen Z and Gen Alpha? The journey from love at first sight to love at first swipe has had as many ups-and-downs as my emotions during my period. But it’s still love. It is inevitable that the way it looked aaj, kal… or may look like parso is different. What doesn’t change is the need for companionship. Some of us take this journey with a significant other while others simply don’t have the time for it. They prefer self-love. Because isn’t that the hardest one of all?

Ramadan Fasting (Part 2): Experts Talk About The Health Benefits For Your Body

Breast Cancer Awareness: Risks To Look Out For Even If You Don’t Have A History In Your Family