More
Next Door NaariThe Rishi In The White Man's Land

The Rishi In The White Man’s Land 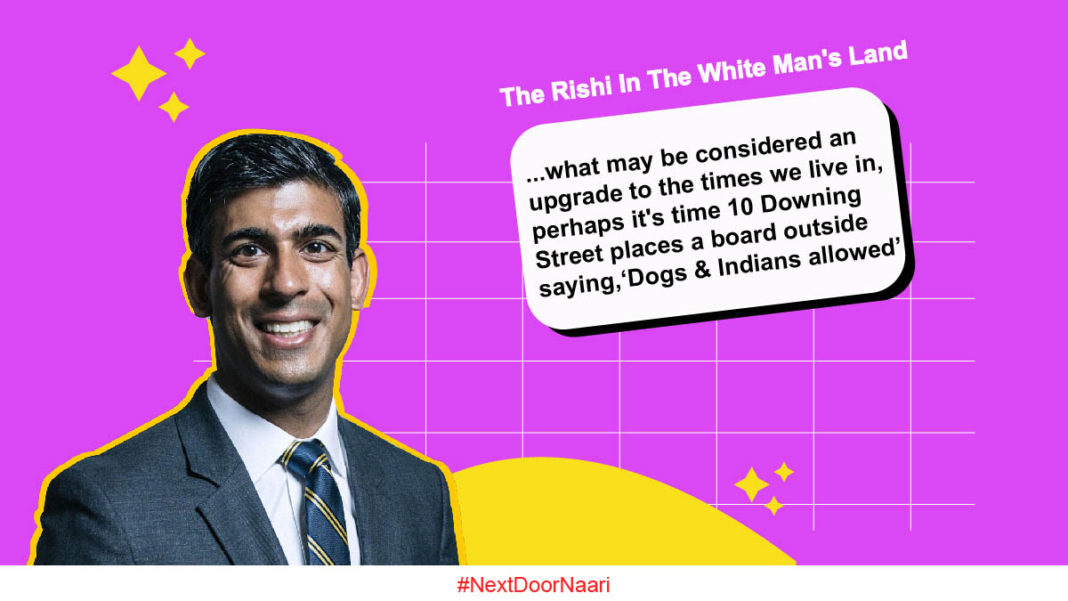 When you’ve grown up in a Punjabi family like I did, you’ll know about our special connection with the UK. The social, the historical and the emotional. The good and the bad.

We think of London more often than we think of Lucknow. We all have some close/distant/semi-distant (our next-door neighbour’s aunt’s cousin’s daughter-in-law’s sister-in-law – anyone?) relative who stays there, mostly in Southall or Birmingham or some other heavily desi populated area. Who come visiting every year with a British accent strongly lacing their Punjabi. Having NRI cousins who bring everything from chocolates to perfumes to alcohol – that’s the good part. As far as the bad part goes, many of our grandparents and great-grandparents remember horrors of British rule and some even partition. And some, even the horrors that came out of it. Ask a Punjabi grandparent about the British, and most of them might make a face, calling them colloquial names like ‘gore’ and ‘angrez’. Like mine did. Kohinoor le gaye, my grandmother would say, often telling me the same story of how her entire pind in Punjab had celebrated India finally becoming independent after almost two centuries of British rule.

With that in mind, it perhaps wouldn’t be wrong to say that life truly has come full circle, with Indian origin Rishi Sunak becoming the new Prime Minister of the United Kingdom. From being the same community that was colonised, to being ones in positions of power. From British clubs in India having signed boards outside that specifically mentioned Indians not being allowed, to a day where an Indian occupies the official residence of the Prime Minister at 10 Downing Street in London.

As the popular Whatsapp and Instagram forward goes, Karma is a bitch. I’m sure our ancestors are doing a joyous ‘bhangda’ dance in their graves, right from the moment they learned that within 75 years of independence, an Indian origin man would be the Prime Minister in the land of the ‘angrez’.

The bigger question is, what does this do to the overall perception of Indians in the UK, or even all over the world for that matter? As I’ve been told by a lot of friends and family, if you went to an expensive department store or restaurant in London in the late ‘80s or even the early ‘90s, you would mostly see Indians as Grade 4 staff. The cleaners, the helpers, the servers. Very rarely would you see them as the extensive shoppers or diners that we do today. And so Sunak’s journey from an immigrant worker to Prime Minister is representative of the tale of so many immigrant Indians – battling racism, bias and other such issues in a foreign land. From being the underdog to becoming a community that’s at the very forefront of the country – socially, economically and politically.

Rishi Sunak is just one example. But there are many other Indians and Indian-origin artists, politicians and CEOs, who’re making an active presence felt on the global stage. From Kamala Harris to Indra Nooyi to Priyanka Chopra. As a 90s kid who grew up looking at her NRI cousins in awe, admiring and sometimes even emulating everything from their accent to their clothes to their choice of makeup and beauty brands, it’s perhaps good to see the feeling reverse itself. Where everything from our very own haldi-wala doodh repackaged as turmeric latte, to yoga & ayurveda, to eventually our own people creating their own place globally and how!

So today, we can gladly sit back and celebrate the new Indian-origin British Prime Minister with some chai and mithai, irrespective of whether we contributed to his win or not. And what may be considered an upgrade to the times we live in, perhaps it’s time 10 Downing Street places a board outside saying, ‘Dogs & Indians allowed’.

The List: 10 Trendy Saree Styles To Get Shaadi-Ready For The Wedding Season

21 Tareeke To Improve Sexual Compatibility For A Healthy Relationship