More
Next Door Naari(Celebrity) Baby On Board

(Celebrity) Baby On Board 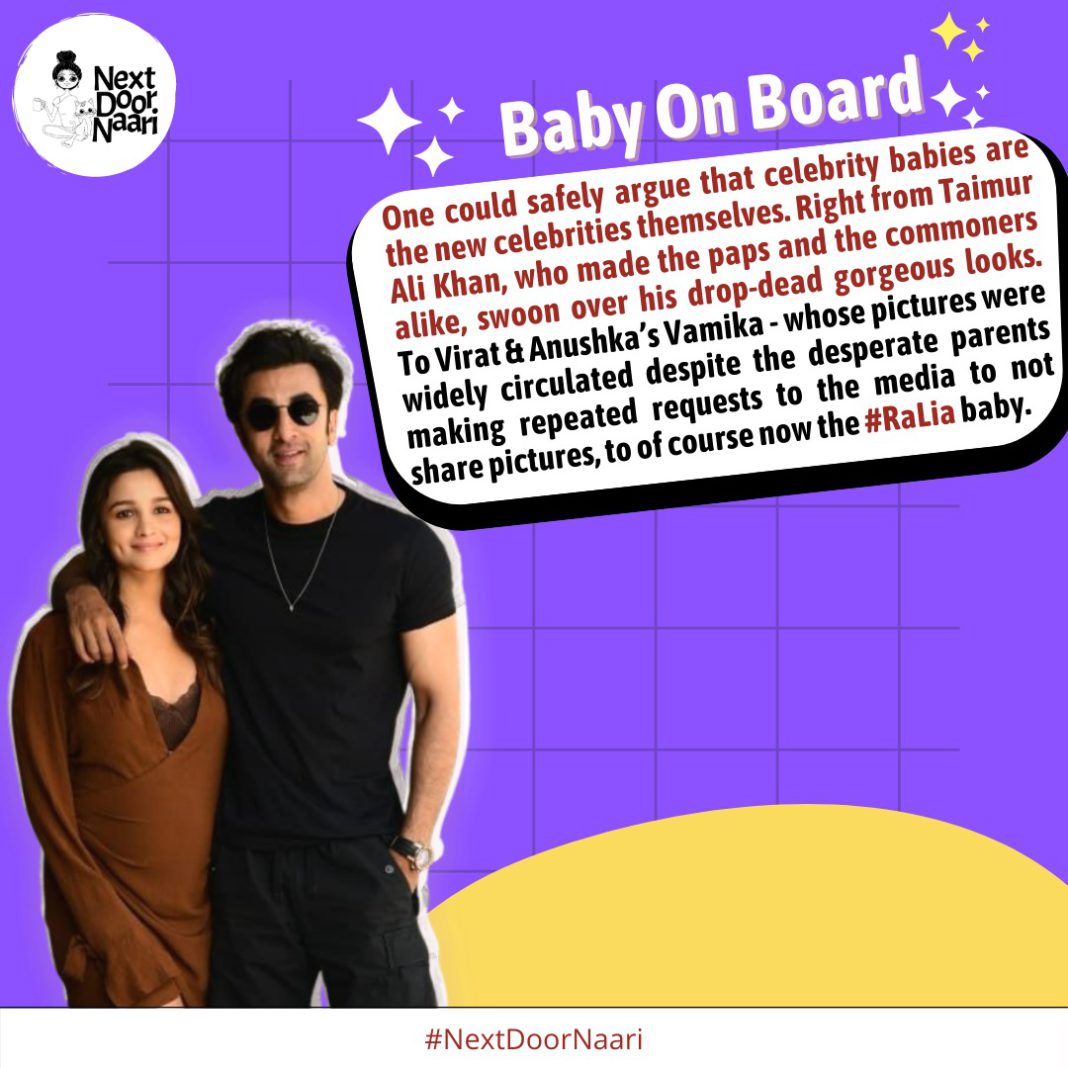 Almost 9 of 10 news articles in the entertainment section this week are going to talk about Ranbir Kapoor and Alia Bhatt’s baby girl making her rather ‘roaring’ (you’ll get this reference only if you follow either of them on Instagram) presence into the world. Right from details of the hospital to the gynaecologist to whether it was a C-section or not, to the paps camping outside the hospital, eagerly interviewing any and everyone who has any connection at all with the Bhatt-Kapoor newborn, and to other celebrities themselves congratulating the newest parents in B-Town on social media. Not to mention the reporters chasing the car in which the baby is driven home.

Obviously, I’m not surprised with this. Or the news of any other celebrity wedding or baby that almost always sends the media into a frenzy. Bigger the celebrity, the bigger the rage. Afterall, we are a Bollywood obsessed country and society; and in all likelihood always will be. Cricket is another such institution, but other than that, few entities command the same adulation that Bollywood stars and their lives do. From websites and Youtube channels solely dedicated to decoding everything from workout routines to skincare regime to what’s in their bag, to celebrity weddings feeling like we’re almost part of the guest list, to  – we never will stop gushing about Bollywood celebs, will we?

Celebrity diets, make-up and fitness routines, and fashion trends have always been well sought after, right from the ‘90s. Then it was all about celebrity weddings – destination, designer and dhamaal. And now, the newest entrant to the club is the celebrity offspring. And the entire uproar around them.

One could safely argue that celebrity babies are the new celebrities themselves. Right from Taimur Ali Khan, who made the paps and the commoners alike, swoon over his drop-dead gorgeous looks. To Virat & Anushka’s Vamika – whose pictures were widely circulated despite the desperate parents making repeated requests to the media to not share pictures, to of course now the #RaLia baby. Not to forget that there are always eyes on the horizon in expectations of additions to the list of celeb babies. Speculations that Katrina might be pregnant and Whatsapp jokes about Ranveer Singh’s Sindhi mother not hankering enough for a grandchild have been on the rounds since a while. I don’t think we’ve ever cared about celebrity babies, as much as we do now.

It’s not like we didn’t care about celebrity kids earlier. Shahrukh’s son Aryan was a star right from the time he made that cameo crawling appearance in K3G. Everyone wanted to know when Arjun Tendulkar was going to make his cricket debut. And Jhanvi Kapoor had a whopping million Instagram followers even before she starred in her first film.

But at the same time, these kids of many stars weren’t as mainstream enough. In some cases, we barely knew much about them other than their names. And the few glimpses we did get were usually brief interactions – a mention in an interview once in a while, a photograph in some random magazine, fleeting appearances at some award function. But that was of course pre-social media era. In the Instagram age – we feel more exposed and often as a result – more inquisitive and connected with these children. Right from the time they’re born. And while some celebrity parents may choose to refrain from sharing pictures of their children, there are usually multiple glimpses into the parenthood journey for us to feel a part of it, right from the much-awaited pregnancy announcements, to pictures of the baby shower and babymoon, to the baby announcement. And thereafter.

No one even bats an eyelid when even aunties at a family get-together debate about whether Kareena’s second child was ’normal’ or an IVF case, when the younger women collectively admire the latest maternity fashion flaunted by B-town mommies-to-be, and every book on pregnancy diet and workouts by a once-pregnant celebrity easily finds a place on other expecting mothers’ lives.

It might be interesting to see what kind of a future awaits these kids. Taimur, in a couple of years, might become an influencer. Maybe even launch his own fashion brand (Junior Nawab – how’s that for a name!). Baby Vamika might become a child cricket prodigy like Daddy Virat. And the #RaLia baby might even make her film debut much earlier than even her mommy at 16. Usually for most children of film stars, the usual trajectory has been to reach a certain age before making a film debut of their own. However, given the kind of fame they enjoyed right in their early days, star kids have everything from their own Instagram account to their own fashion line to perhaps their own show.

Expert Talk: Go Mommy’s Roopika Sareen Guides You On How To Juggle WFH With Your Kids Attending Online Classes

Vocal For Local: Watch Out For These Creative Women-Led Ventures In Home Decor & Fashion!

Quirky Ways To Make Your Own Little Coasters