How ‘Jab We Met’ Became The Love Anthem For Our Generation 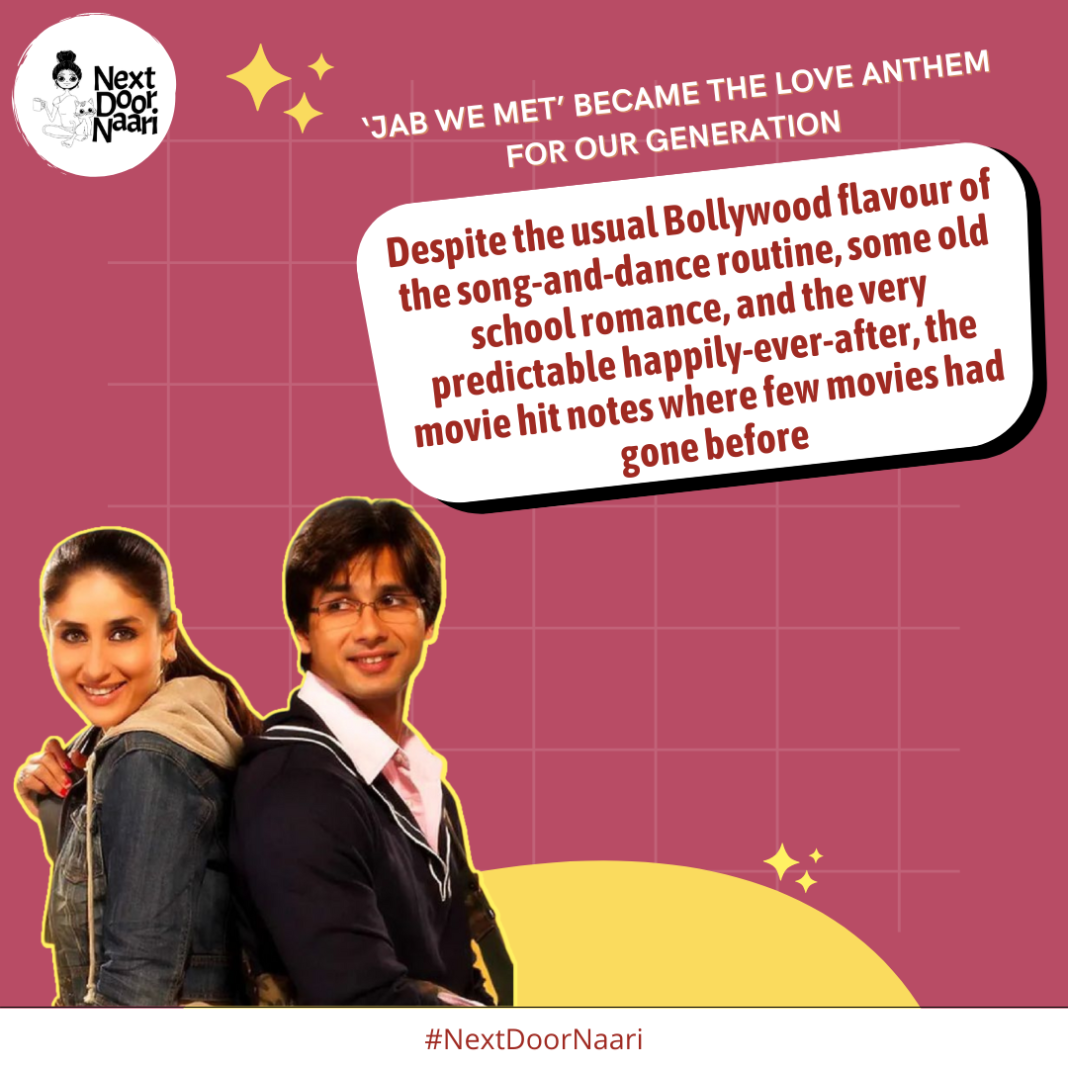 For a generation who grew up watching mommies and nani-dadis stay glued over the Tulsi-Parvati-Prerna triangle of over-sanskaari women day and night, Jab We Met’s Geet marked a revolution for how your female protagonist should be. And similarly, for our generation who always saw the male actor in films dancing around mountains and trees, dropping his shirt in a minute and bashing up the bad guys to rescue his lady love, Aditya Kashyap broke the mould. And so did the movie, despite having the age-old girl-meets-boy plot (Imtiaz Ali you genius!). For every millennial Indian kid, Jab We Met went beyond being your regular rom-com. It was a philosophy that you either fell in love with the first time you discovered it, or one that grew on you. But either way, it was one you kept wanting to come back to, to seek repeated comfort in.

As the film plot goes, a depressed millionaire Aditya Kashyap struggles with his personal and professional life falling apart, finding respite in escaping his life and boarding a train. Headed to where, he doesn’t know himself. And in a moment of absolute serendipity, he encounters a loud, bubbly, proudly over-the-top Geet Dhillon. Who is also planning to elope, but towards a planned destination – her boyfriend who she wants to get married to against the wishes of her family. I’ve never missed a train. By God, she proudly exclaims and doesn’t hold back from offering unsolicited advice, much to the chagrin of Aditya who would like nothing more than his droopy solitude.

And as the storyline unfolds with a comedy-of-errors style journey; with multiple backdrops such as the Indian trains and railway stations some of us hadn’t even heard the names of before (Ratlam, anyone?), random stops along the way. And the colourful, noisy, family-filled Geet’s hometown of Bhatinda. Geet and Aditya get to know each other. And subconsciously, Aditya falls in love with Geet. Only to realise that he’s going to have to escort her to the man she loves.

Aditya returns home a changed man, courtesy life lessons learned from Geet – optimism, unparalleled energy and taking each day as it comes. And then to learn through another series of circumstances that Geet hasn’t quite found her happy ending, and the heartbreak has transformed her into a sad, completely changed girl – a mere shadow of her former self. And without absolutely any spoilers (because I haven’t known anyone who hasn’t watched the film), the rest of the film revolves around how Geet and Aditya put their respective pasts behind, falling for each other and getting together in the end.

Coming to why the film became the phenomenon it did.

Despite the usual Bollywood flavour of the song-and-dance routine, some old school romance, and the very predictable happily-ever-after, the movie hit notes where few movies had gone before. An absolute pataka heroine – loud yet very comfortable in her own skin. Right from her Main Apni Favourite Hoon, a tagline that became the new self-love mantra, to the t-shirt-patiala salwar combination that became a fashion trend for a while, everything about Geet spelled self-love and confidence. A hero sans the typical macho-ness (so typical of the male actors of the 90s), rather the silent, deep personality – one who needed his lady love to save him from self-destruction (at least in the first half).

And the unconventional settings that provide backdrops for events in the film – the Indian Railways coach where Geet and Aditya have their first unplanned encounter. The dingy hotel room in the Hotel Decent where Aditya opens up to Geet about the troubled relationships with his parents and ex.  The picturesque valleys of Manali and Shimla where Aditya loses and finds Geet. What’s interesting about them is that they don’t just remain in the background, they become characters in their own right, paying tribute to things and places most millennials still hold close to their heart. Train Journeys. Small towns and hill stations. Love stories aren’t particularly heroic, but find a place in your heart over time.

The other thing was how the film managed to impart raw, sincere life lessons without coming across as preachy. Geet and her ideals of self-love, celebrating your own unique personality with all its quirks, and being the perpetual optimist. Aditya and his journey of self-discovery. Eternal life philosophies of taking chances, fighting inner demons & toxic relationships and chasing raw, selfless love.

While unanimously liked, JWM has won its fair share of criticism. Many have criticised Geet’s character as being one of self-obsession, a little too carefree for the realistic world, maybe even over-optimistic about things occasionally. Some have said that the film and its story is a little too good to be true. What kind of man goes all the way to a girl’s house, elopes with her and then leaves her with her lover, they say. But like they say, even a masterpiece isn’t without its flaws. And Jab We Met should be allowed some of its own too. Till then, let even the film’s story proudly claim, Main Apni Favourite Hoon.

These #IGotItFromMyMom Stories From Real Women Will Tug At Your Heartstrings

Everything You Need To Know About Vaginal Discharge