How P-Dramas Made Their Way Into Our Hearts 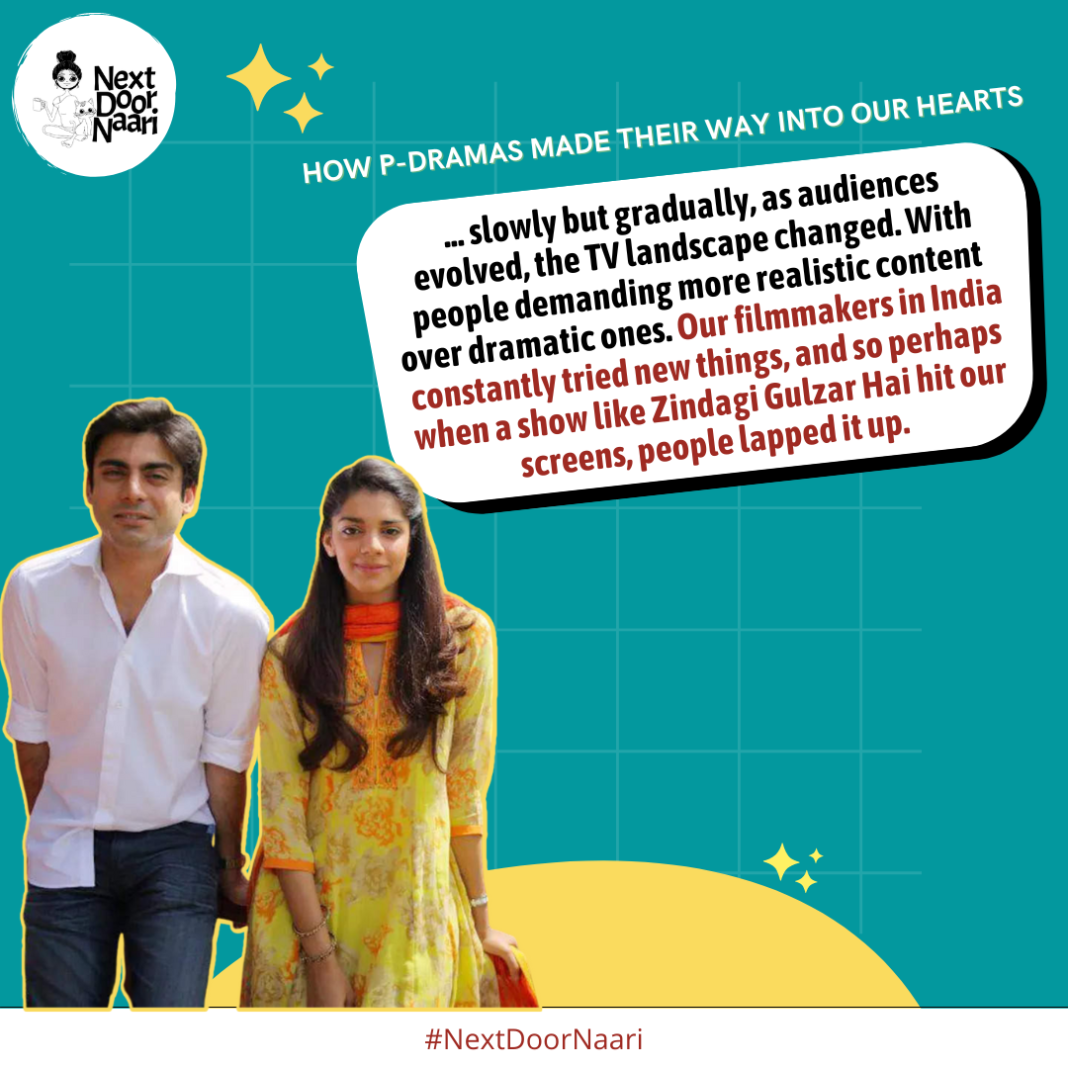 Let’s face it, we’ve never been best friends with our neighbours across the border. Thanks to an entire unresolved plethora of political issues that have sprung up over the years. Despite our common history. However, leaving aside the political and military issues between the two, what we’ve never been able to ignore (in fact, we’ve come to love) is the slow, yet steady exchange of culture that’s happened between the two countries. Right from fashion to music to Bollywood. And added to this list is our obsession with Pakistani dramas.

It’s not that we were strangers to Pakistani dramas. I do remember my parents talking about having watched shows like Dhoop Kinarey in their college years. For our generation though, we didn’t grow up with much exposure to Pakistani content and culture. The exception was cricket and music (with singers like Atif Aslam and bands like Jal being known names in this part of the world). However, in terms of Indian television – the late 90s, and perhaps the early 2000s belonged to the likes of Ekta Kapoor.

The staple TV show revolved around a sanskari female protagonist (and in most cases a vamp) and consisted of some typical elements like their women being dressed in the heaviest of saris, jewellery, and loud makeup as they went around doing even the simplest of household chores. Overdramatic reactions with face freezes. A series of rather recognisable cues that were synonymous with events and occurrences on the show – the mandir diya going off when someone was about to die. A photo frame crash followed by a rather predictable family feud. An entire circus of people dying, only to return with plastic surgerie-d faces and forgotten memories. Oh, and not to forget the never-ending time lapses, where the actors aged twenty years overnight and barring a single strand of white hair, looked the same as their newly introduced children in the show.

Makers regularly defended these shows saying that they served their purpose by giving their viewers an escape from their daily lives and using the TRPs as their holy grail. Somewhere, the same shows that had been introduced to give audiences (majorly women), a slice-of-life experience into the lives of the protagonists, became boring and monotonous. And perhaps, even unrelatable on many levels. But the TRPs kept buzzing, so makers of these shows didn’t even experience the need to bring about a dramatic (yes, all pun intended!) change.

And slowly but gradually, as audiences evolved, the TV landscape changed. With people demanding more realistic content over dramatic ones. Our filmmakers in India constantly tried new things, and so perhaps when a show like Zindagi Gulzar Hai hit our screens, people lapped it up. The story of a rich spoilt brat Zaroon (played by Fawad Khan, who took barely any time in becoming the nation’s new crush) and a lower middle-class, self- righteous ambitious Kashaf. While it felt familiar in terms of a storyline, had a refreshing touch of modesty, a powerful script and stellar actor performances. Right from the drop-dead gorgeous Fawaad Khan, to the fact that the show had a definite start and end, to the simplicity and realistic representation of life in Pakistan (making us realise and appreciate multiple times, the similarity in cultures). Added to which, the true cherry on the cake was the sweetness of the Urdu language, many of us getting introduced to words we had never heard earlier.

Following Zindagi Gulzar Hai’s success, Humsafar, another show starring Fawaad Khan and Mahira Khan (who even went on to star in a film with Shahrukh Khan) made its way to our screens and hearts, this time even stronger. Audiences (particularly the ladies) found another reason to fall in love with Fawaad Khan all over again, and eagerly watched Asher and Khirad’s story unfold as it took us through the themes of love, betrayal and realisation.

And with that, these shows from across the border had found their place. Irrespective of the fact that relations with our neighbours have been rather volatile politically – going from being on talking terms to souring, the average Indian TV viewer has found a sense of reality and association with shows like these. And filmmakers in both countries seized the opportunity. Right from Zee TV launching an entire channel Zindagi, dedicated to across-the-border content, to many even using YouTube as an open channel, to OTT players especially commissioning Pakistani filmmakers to make shows for their audiences in India.

Perhaps what we all came to love about these shows was their earthiness, the fact that the characters in these stories seemed real. And relatable. And harboured aspirations, tensions and stress similar to ours. And more than that, even though they had their roots in another culture technically, they had the warmth and familiarity of somehow belonging to us. Of course there are some things and themes which we may not also relate to. The existence of inter-family cousin marriages for instance. A society which is still a little more conservative in terms of attire and thought, as compared to our slightly more independent one (at least if we compare to a majority of urban India). And while they may not replace our Indian shows completely, they’ve created another audience and fan-club, altogether.

A Letter From The Founder On This Women’s Day