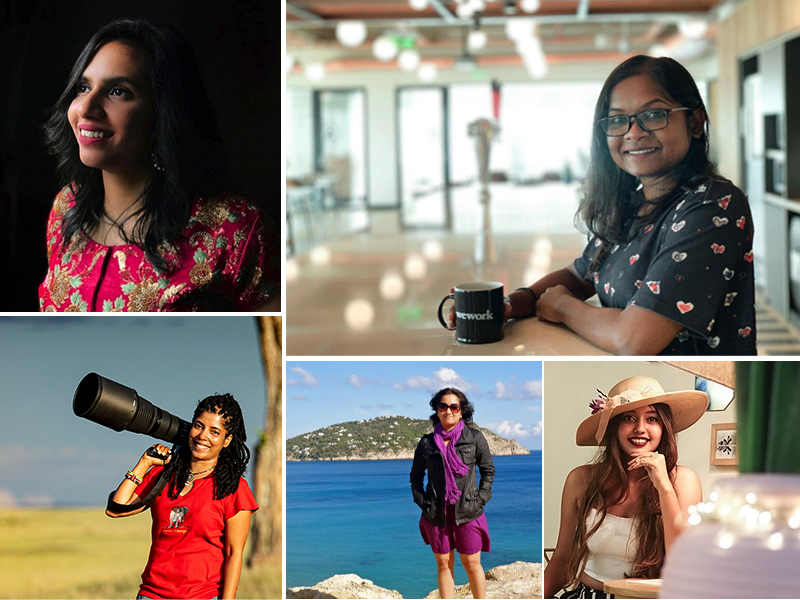 Photography is a way of feeling, of touching, of loving. What you have caught on film is captured forever, it remembers little things long after you have forgotten everything. When you think of a photographer, Dabboo Ratnani or Atul Kabekar might pop up in your mind but there are many female photographers shaping the world. Like Aishwarya Sridhar who became the first Indian woman to win the Wildlife Photographer of the Year award 2020. In pictures and in life, each person sees something different. The art of photography lies in showing the viewer the way you see the world through your lens and hopefully capturing their interest in a way that draws them into that moment in time, that feeling that your image conveys.

India’s history is punctuated by stories of several firebrand women who took the off-beat path and chose to live life on their own terms. By breaking stereotypes, they helped promote gender equality. Indian women are pioneers in their fields not only on the home turf but all over the world. Women have been standing at the forefront of experimentation with the camera and produced invaluable visual testimony that reflects both their personal experiences and the extraordinary social and political transformations of the era.

Homai Vyarawalla (1913-2012) commonly known by her pseudonym ‘Dalda 13’ is India’s first woman press photographer among 120 trailblazing photographers from over 20 countries to be featured at The Metropolitan Museum of Art in New York and she was also awarded the Padma Vibhushan.

10 Desi Women Photographers Capturing The World Through The Lens

A renowned photojournalist, Avani has contributed to some of the top publications in the county. Well-known for her documentary on her father Raghu Rai, she has also been doing laudable work in Kashmir, where she brings the focus on women, children and the lost voices of Kashmiri people. Her photos are powerful, thought-provoking and in a deep sense, emotional.

Prarthna is known for her work in exploring gender, especially female identity in India. Her pictures tell a moving story, about people, their identity, and their place in the country. These female narratives are constructed within India’s own traditions, poised between fragility and abundance. She has worked for several publications worldwide, including Architectural Digest, Wired, The New York Times, The Wall Street Journal, FT Weekend, Monocle, The Economist, Wallpaper City Guide, CNN, and The Sunday Guardian. In January 2020, Prarthna Singh and Snigdha Poonam set up a tent on the roof of Prarthna’s parents’ house in her hometown in Jaipur. They had invited dozens of people between the ages of 18 and 25 across a broad range of social, political and economic backgrounds to come and talk to them. Prarthna photographed them while Snigdha took notes. They also recorded these interviews, which are in a mix of Hindi and English. The result is ‘Waiting: A Portrait of Young India’.

Nisha Purushothaman is an avid traveller and photographer. She is a naturalist, conservationist photographer. She is the co-founder of ‘YNot Escapades’ a photo tour company and one of the founding members of ‘Paw Trial Explorers’ which works for conservation. From the backwaters and rainforests of India to the grass plains of Masai Mara; from the crater of Ngorongoro to the deserts of the Middle East, she has spent days and nights passionately following the landscapes, flora and fauna, birds and wildlife of these places. She has achieved many awards, and published and exhibited her work at prestigious platforms.

A travel writer, climate change activist and photographer by profession, she is an offbeat and adventure travel enthusiast. Eschewing touristy things and sightseeing, she prefers to trek or travel to remote corners in search of extraordinary stories. She quit her 7-year job as a Software Engineer to do all of this full time! Shae has published her words and Images in BBC, NatGeo Traveller, Travel+Leisure, Mint, Indian Express, The Hindu and more. She has been fortunate enough to be treated to exquisite travel experiences so far such as stalking a snow leopard in Ladakh, snorkelling in one of the world’s most pristine coral reefs, hiking independently for a whole month in Turkey, exploring the vast steppes of Mongolia by a truck for weeks and most importantly, spending an inordinate amount of time in the invincible snowfields and magnificent slopes of Himalayas.

Rema is a fashion and fine arts photographer, whose work is inspired by nature, and the environment she lives in. Even her commercial work—for Gucci, Nike, Adidas, Netflix, Dove, Google and Forbes Japan among others—is noteworthy. Don’t miss the stunning portraits that fill up her feed beautifully. Rema has gone on to work with some of the country’s most progressive indie fashion labels, fashion icons-in-the-making and thought leaders like Kayaan Contractor and Karuna Ezara Parikh, and actress Kalki Koechlin on the project ‘A Day In The Life’.

Having grown up in the foothills of the Himalayas in India, in 2011 at the age of 23, Shivya Nath quit her corporate job, sold her possessions and began to travel the world. She lives a nomadic life, seeking adventures off the beaten path, and works on the go to fund her travels. A top-ranking travel blog in Asia, The Shooting Star, along with her Instagram feed is the home to all her travels. In 2014, the story of how she quit her job to travel was featured on BBC Travel. In 2017, she was featured on the cover of National Geographic Traveller India magazine! She was awarded silver for best writing in a travel blog at TBC Asia Awards, her work was featured in The Washington Post, among travellers changing the way we think of the world. In 2020, she won gold for best communicator at the WTM Responsible Tourism Awards India.

With shoot experience in over 20 countries around the world, with iconic images to her name from the hundreds of wedding shoots she has led, Shivali Chopra is one of India’s finest women photographers. She is an international award-winning photographer with wins at Fearless Awards and many more, and her work has found mention in the press several times. Sony has recognized her body of work and has given her the title of “Sony Artisan”. Shivali is a Stories veteran, and this is her seventh year with the firm. She brings substantial experience and an artist’s eye to every shoot and is calm and collected under pressure.

Rimi is based in Bangalore. She loves travelling and experiencing new places, cultures, relationships and everything in between—the love, the hate, the gossip, the chaos, and the unknown. This is what brings her to photograph weddings while loving and relishing every aspect of it. Every wedding is unique and Rimi aims to capture each moment as honest and real, so that when you look back you just don’t see your wedding album, but you relive each moment. To her, photography is more than pictures. It is about building relationships and being a part of milestone moments in the lives of people.

The founder of Good Food Clicks, an inspiring platform for food photography enthusiasts, Vanisha Rodrigues is great behind the camera not just as a photographer but as a stylist too. She has worked on over 50 food photography and strategic marketing projects along with top chefs in Mumbai, to create enticing and aesthetically appealing content for their brand-building initiatives. With a knack for leading teams to ensure that work is planned, executed and delivered on time, she heads a group of 7 people that strategize social and digital marketing activities for SMEs across Mumbai.

Want to know Vanisha’s story? Here Vanisha shares her professional journey, talks about the strategies she employs to keep her Instagram page competitive and discusses her first milestone and recognition for Good Food Clicks.

The thing about social media is, it’s not just a platform for socialising. It’s almost like a catalogue—from pictures, videos to stories, there is so much to discover, learn, and love. For photography and design enthusiasts, there’s a whole world of talent you must know about. Follow these amazing women photographers from this list and get inspired.

#BusinessOfLove: Cai Footwear Couplepreneurs Aradhana & Dhanraj Minawala On Balancing Work & Personal Life With Your Other Half