Buzz 46: The Cadbury ‘Kuch Khaas Hai’ Ad Is An Ode To The Old & Sign Of A Better Future 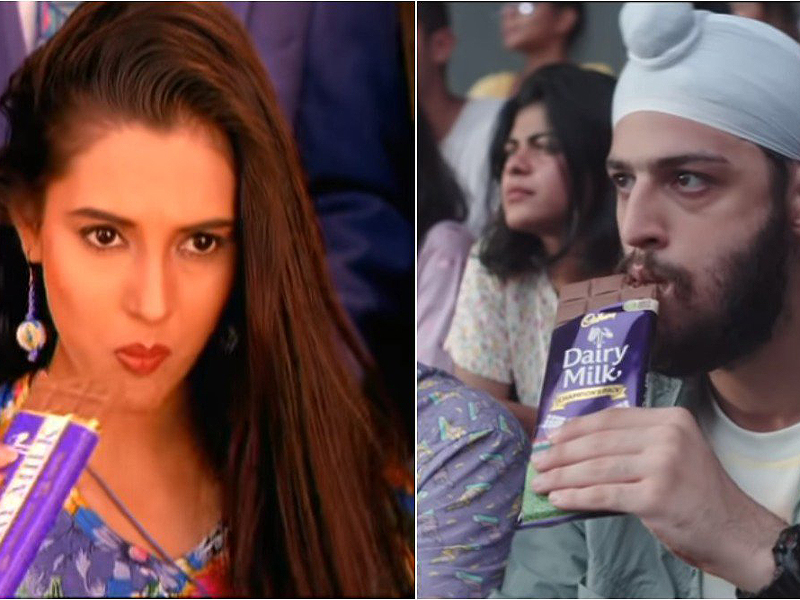 Friday, 17th September 2021 gave rise to a new video that perfectly captures the nostalgia and the hope for a progressive future. The confectionery company Cadbury is synonymous with chocolate in India and their latest advertising campaign proved it again. With 15M views on YouTube, 4.89 lakh views on Instagram and thousands of shares later, the brand’s novel take on the 90s classic ad is a viral hit.

What’s the story behind the two ads, what has changed and why are all the 90s kids going gaga over it? Here are TC46 top facts about this trending video.

The confectionery giant Cadbury gave the world an iconic advertisement in the 1990s. It featured model Shimona Rashi, dressed in a floral outfit. She sat on the sidelines of a cricket match, happily munching away a bar of Cadbury Dairy Milk. When the cricketer (her boyfriend) scored the winning run, she ran past security onto the field. Celebrating with a dance on-field while the “asli swaad zindagi ka” tagline played in the background. The advertisement by ad agency Ogilvy helped change the perception that chocolates were only meant for children.

The 2021 ad, by the same ad agency Ogilvy, is absolutely winning hearts. By changing little except gender roles, the brand has reimagined its iconic advertisement. This time, it is a women’s cricket match in progress. And a man is sitting among the spectators, eating Dairy Milk. When his girlfriend scores the winning six, he breaks into a celebratory dance and rushes onto the field to hug her, with the same song playing in the background. The hashtag #GoodLuckGirls flashes, cheering on women sports players who are emerging as powerful role models for the youth.

India is a country where cricket, forever, has been largely synonymous with men’s cricket. This shift in a classic advertisement marks a change in the popular perception of the sport. Social media users were quick to notice Cadbury’s nod to its iconic advertisement, welcoming the company’s decision to turn gender roles. In 2021, where women have showcased their talents and won medals for the country in various games and sports, the ad celebrated these achievements.

4. The Appreciation Is Endless

From Tahira Kashyap Khurrana to the niece of the original’s creator Vikram Bangera, social media is applauding the new ad. One Twitter user said, “With this role reversal ad we can see how much women have progressed in Indian society whilst the emotions of success and victory still remain the same.”. “An iconic campaign, a contemporary twist and so many relevant messages!”, said another.

The iconic ad’s creator, Ogilvy’s Piyush Pandey, said in a recent interview that when he speaks at management schools today and the frame of the girl dancing on the cricket field appears, all the students go mad. And the thing is they weren’t even born back then! Anil Viswanathan, Senior Director of Marketing at Mondelez India, said that the ad celebrates women achievers; both in sports and in life. “It was a young creative in Ogilvy who came up with the idea and we instantly loved it. Clearly, that ad was iconic, it created a trend and it was culture leading at that point in time and we feel that this representation also has the potential to be culture leading,” he said.

5 Brands That Are Helping Women #BeALittleMore

Get The Best Facial Treatment At Home: 8 Steps To Rejuvenate Your Skin