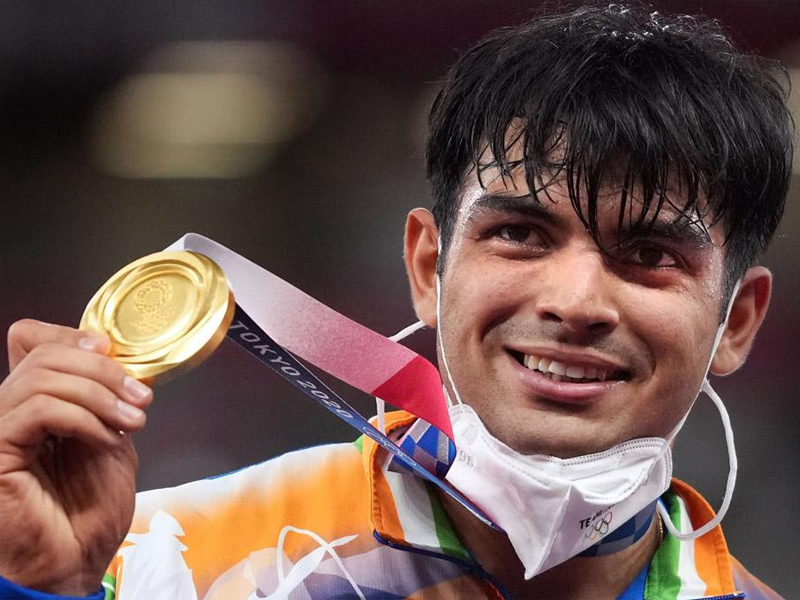 Everyone is still processing this feeling of euphoria that comes after Neeraj Chopra scripting history by winning India’s first gold medal in the Tokyo Olympics. The 23-year-old from Panipat set a few astounding records when he won the Men’s Javelin gold medal at the Tokyo Olympics. He became the first Asian man to win the competition at the Olympics and was also the first Indian track and field athlete to become an Olympic champion. On 7th August 2021, with his javelin in hand, Chopra was nothing short of a rockstar at Tokyo’s Olympic stadium. Get the latest highlights of the Indian squad conquering the Tokyo Olympics 2021 here!

Growing up at Khandra village, near Panipat, Neeraj was an overweight and restless kid most of the time. Since his family wanted to keep him occupied, his dad, a farmer, took him to the Shivaji stadium. Neeraj had tried other sports too. He was not too fond of running, but when he saw a few heavy men throwing the javelin, he wanted to try it too. When he realised that he was good at it, he started loving it more.

In pursuit of excellence, it was a roller-coaster ride for the tall, sprightly and humble athlete after being pulled into the sport by senior javelin thrower Jaiveer Choudhary from a nearby village in 2011. Chopra was game to it and after a few months, in search of better facilities, he shifted to the Tau Devi Lal Stadium in Panchkula. At this point came the financial issues as Chopra needed accommodation, better equipment, a kit and a better diet to go up to the next level. It was a tough decision for the joint family which owns less than 10 acres of land. But they pulled through and by 2015, Chopra had joined the national camp.

By the end of 2012, he had become the U-16 national champion. In 2013, he took part in the World Youth Championships in Ukraine but returned without any medals. Next year, he won a silver in the Youth Olympics Qualification in Bangkok, his first international medal.

Chopra’s first medal in a national senior championship came in July 2015 during the Inter-State event in Chennai with a throw of 77.33m. A few months later, he won gold in the National Open Championships in Kolkata.

The year 2016 was a breakthrough for Chopra. After crossing the 80m mark at the fag end of 2015, Chopra won the South Asian Games in Guwahati in February 2016 with a throw of 82.23m. A few months later, under the guidance of late Australian coach Gary Calvert, Chopra created history during the world junior championships and announced the arrival of a truly world-class javelin thrower.

His other achievements include gold medals in the 2018 Commonwealth Games and the Asian Games, besides the top finish in the 2017 Asian Championships. He is also a 2018 Arjuna Awardee. Chopra has had his brush with low phases too. He underwent arthroscopic surgery on the elbow of his right throwing arm in 2019 which kept him out of action for nearly a year but he came back stronger.

In 2016, Neeraj Chopra was inducted into the Indian Army in the sports quota at the rank of Naib Subedar. His parent unit was 4 Rajputana Rifles. He was selected for training at the Mission Olympics Wing and the Army Sports Institute in Pune. Mission Olympic Wing is the Indian Army’s initiative to train promising sportspersons.

Subedar Kashinath Naik, who won the bronze medal at the 2010 Commonwealth Games in javelin throwing, was Neeraj Chopra’s trainer. Neeraj Chopra was also trained under German coach Uwe Horn and won Gold medals for India in the Commonwealth Games in 2018. From a Naik Subedar, Neeraj Chopra was promoted to the rank of Subedar and received accolades for his contribution to sports. He was conferred with the Arjuna Award in 2018 and the Vishisht Seva Medal, which is a decoration of the Indian armed forces. Neeraj Chopra has proven that when there is the WILL there is a way. He has done the Armed Forces and the Nation proud like many other Olympians who have created history in TOKYO 2020.

Neeraj got close to his personal best of 88.07m but even without breaching it, he was able to finish on the top set of the podium. Neeraj Chopra, with the best effort of 87.58 metres, led from start to finish as favourite Johannes Vetter crashed out early in the javelin throw at the Tokyo Olympics. India’s Neeraj Chopra became only the second individual Indian athlete after Abhinav Bindra to be crowned Olympic champion as he won gold in the men’s javelin throw at the Tokyo Olympics on 7th August 2021. The gold medal is also India’s first Olympic medal in track-and-field events.

It took India’s medal count at Tokyo 2020 to seven – their best-ever haul at a single Olympics. India had won six medals in London 2012 but there were no gold medals. Neeraj Chopra threw a best attempt of 87.58m to win the Olympic gold. The Indian javelin thrower then improved to 87.58m with his second throw to maintain his place at the top and went only 76.79m in his third attempt. However, he had done more than enough to get three additional attempts.

Neeraj’s consistency made the world sit up and take notice of the Indian star as he delivered on the biggest stages of the sport, blowing away the Men’s Javelin field at the Tokyo Olympics. Neeraj Chopra also finished top of qualifying – began with an 87.03m throw at the Olympic Stadium in Tokyo, the best of anyone after their first attempts.

Elated after winning the event and clinching the gold medal, as customary, Neeraj Chopra held the Indian flag up high, with tears in his eyes and went to the Indian dug out and then followed it with a small victory lap. Listening to the national anthem at the arena made each Indian filled with emotions.

But what caught the eyes of the fans and the internet is his respect for the Indian flag.  Neeraj being a true soldier knows how sentimental we all are for our ‘Tiranga’ and he gave it due respect that athletes from other countries don’t. He adhered to the flag code and folded our national flag accordingly before putting it inside his bag. This made the entire country love him even more. The future of this humble superstar surely looks even brighter after this historic win!

Quiz: Match The On-Screen Bollywood Mother With The Movie She Appeared In