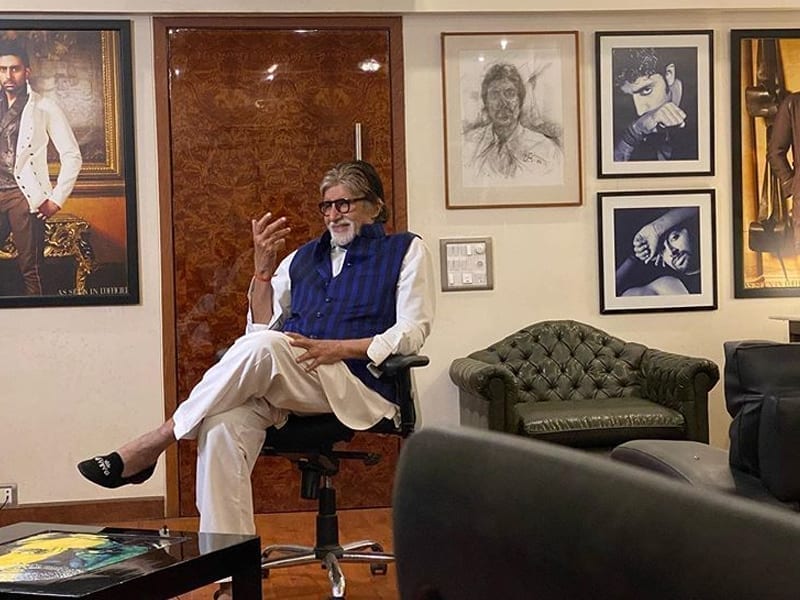 Veteran Bollywood superstar Amitabh Bachchan might not be as active on social media but he shares quite a few updates on his Tumblr blog named Bachchan Bol. From his career anxieties, mental health issues to recalling that London trip that led to his marriage with Jaya Bachchan almost 47 years ago, he has really poured his heart out on the platform. The combination of all the big experiences in Big B’s life has led to both failures and successes that act as a major inspiration to all.

For someone who is turning 78, he/she would want to be surrounded by grandkids, sit in a garden and reflect on life and the past years spent but the Shehenshah of Bollywood does much more than that. With his career spanning over decades, his successful life is all about the troughs and crests. Therefore, celebrating his birthday this 11th of October, let’s take a look at 5 inspiring chapters from his life that act as major lessons.

One of the most legendary actors of Bollywood, Amitabh Bachchan is an inspiration to many across the world. He has seen both the best and the worst and yet, maintained a demeanour that inspires everyone and sets him apart from the rest.

1. Sweetheart, There’s No Shortcut To Success

Now that there’s a big debate in Bollywood regarding the pros and cons of nepotism, keep in mind that Big B was also the son of a renowned poet, Harivansh Rai Srivastava but success never came on a silver platter to him. He had lived in a small room in Kolkata, slept on the streets in Mumbai, was rejected by All India Radio because of his baritone voice and had got a role in one movie back then as an extra, where he just had to hold a gun in a scene. If one thing Senior Bachchan has taught everyone is the fact that success doesn’t come easy. It’s with immense hard work and dedication that you can achieve the greater things in life.

For instance, in one of his blog posts, he talks about his early days in Allahabad where he recalled travelling in the general section of trains which used to be jam-packed with passengers. Getting a rickshaw or a tanga was also beyond his financial means and consequently, he used to carry his luggage on foot in order to reach his relative’s home.

2. If You Want To Grow In Life, Try New Things

What sets Big B apart from the other actors is his yearning and willingness to learn new things. At the age of 78, he can do well without movies or shows but he still took up Thugs Of Hindostan that required him to jump and perform action scenes. You also simply can’t forget that he played the role of a 12-year-old boy Auro with a rare genetic disorder called progeria in Paa. An actor can only survive through the ages if they’re willing to evolve with the times, and Big B does just that, even today!

This man is known just not for his versatility but also the mere fact that he is ready to experiment at such a later stage in his career. Exposing yourself to new ideas, learning new things, meeting new people and growing as a person overall satisfies your urge as a human being. Remember that trying new things is paramount if you want to succeed in life.

3. You May Fall A Hundred Times, But Never Lose Hope

While Bachchan’s movies portrayed him as an angry young man which pulled his fans to the theatres back in the 70s and 80s, his production house ABCL (Amitabh Bachchan Corporation Limited) went bankrupt. He was on the verge of losing his Juhu house, Prateeksha, and was engaged in several legal battles with authorities hounding him for the recovery of taxes. However, he never lost hope. Despite going through such a difficult time in life, he always believed that “Change is the nature of life.” He knew that jo hogaya so hoyaga, and the focus needs to be on coming out of this problem.

At one point he had mentioned how his conscience took over and he considered paying his loan of Rs 90 crore. He just didn’t consider it but he actually did it after taking up many commercials, films and television stints. Bad times either destroy you or make you as a person.

4. Learn To Value Everyone

Big B is capable of putting this generation’s millennials to shame because of his ultra-cool attitude. Totally proficient in the lingo of the young, he knows how to give befitting replies to trolls and doesn’t even spare his son Abhishekh Bachchan with his spirited one-liners. He is an actor who people from across generations can connect with.

His position in our country is undisputed but has that stopped him from appreciating performances of other young actors? No. Whenever he sees a great movie with a fabulous performance from the cast, he makes sure to send his token of appreciation to everyone. This is one such attribute which makes him immensely special. Remember that learning to value everyone makes you greater than you think you are in front of others. It can help a person grow leaps and bounds.

While filming the 1983 hit film Coolie, Amitabh Bachchan nearly suffered a fatal accident that led to a lot of blood loss. But that didn’t stop him. He finished shooting that same year and the film was released soon after. Even as years have passed, Big B is becoming more and more humble and he doesn’t stop at anything. He knows that he needs to be strong and adhere to his core values. Also speaking of Mr Bachchan’s choice of endorsements, he turned down a Jeevan Sathi advertisement as it encouraged the malpractice of dowry.

Being strong and striving to win was always a part and parcel of his real-life character and he has taught everyone how there are no geographical limits to success! With being named as the “Actor of the Millennium” in a BBC news poll, he has shown us that while many may try to ape the west, it’s cool to be the real east.

With even a comic character named after him called Supremo, Big B has shown everyone how age is just a number. Don’t forget to tell us in the comments below what are your favourite Bachchan movies!

10 Effective Tips To Help You Deal With A Difficult Boss