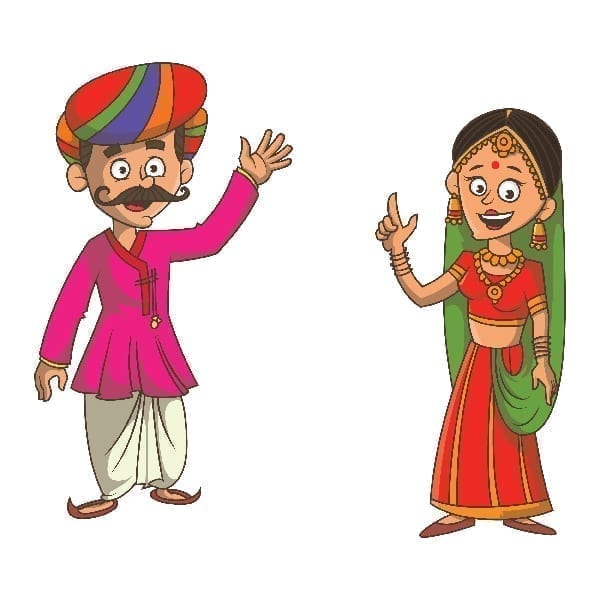 I wonder what it is about famous expressions being three worded.

I can say with firm conviction, that the day the Almighty Lord decided to make superheroes, he also chose to make Indians. The proof of this lies in the pudding, in the fact that there are certain things only our clan is capable of. Having paneer on our pizzas. Performing Bharatnatyam on Ed Sheeran numbers. And of course, being able to continue our age-old custom of arranged marriage down generation, and generation, and generation. With modifications and alterations of course. Yet, the fact that the tradition itself, not only manages to survive but thrive, never ceases to amaze me.

My grandmother tells me stories of how she and my grandfather had never met each other before they got married. And when I blink my eyes in disbelief, just at the prospect of imagining what it would be like to never see your husband before you tied the knot, she says. “That’s how we did it in our times, beta. But you see, we didn’t divorce as easily as your generation does. In our times, our mothers taught us that you would rather die than leave your husband.” To which I roll my eyes. Well yes, no doubt marriages in their generation did stick longer. But then also, there was the chronic log kya kahenge issue. Imagine being stuck for the rest of your life with someone you don’t want to be with, only because you don’t want society to label you a quitter for having ended a marriage that wasn’t working out.  Some serious courage needed there.

My mother, on the other hand, says she was allowed to meet my father and decide for herself if she liked him or not. True, except that the environment in which she accepted my father as her partner for life comprised of a house full of nosy relatives. Who sent the couple to watch a movie, with half-a-dozen other cousins. With my mother’s brother sitting in between the looming love birds, to make sure that they did not, ahem, hold hands. Followed by lunch with the entire gang at a noisy Udipi restaurant. And then when they got home, their respective parents asked them if they liked each other, to which they said yes. All within the span of one day.

And then arrives; my generation. Where mummy and papa emphasize to us that they’re very modern. Yet, they’re worried about who will take care of us once they’re gone. We can tell them if we have someone in our lives or not. There’s nothing to worry if we don’t because the neighborhood panditji has some really good rishtas. Or because they’re modern, they don’t even mind involving technology in the process. Hail matrimony websites? Oh, and even dating applications are fine, as long as we put a ring on it.

Clearly, I’ve been the bad kid here, because I haven’t been able to find anyone yet. Which means that the responsibility of finding me a life partner now rests on the shoulders of my poor parents. One that ultimately leads to the entire arranged marriage tamasha.

The game starts with the creation of this rather significant document called the biodata. Think of it like a resume, except that the intent we’re talking about here is getting you married, instead of getting a job. And the candidate in question is the girl/boy looking to be married.

The biodata is usually accompanied by a picture. Which in my case, involved a rather stressful exercise where a photographer was called home; I was asked to wear my traditional best, and act like a shy, demure bride. Never mind that I never did have the makings of one.

If that weren’t enough,  I have been instructed by my entire family to sanitize my entire social media presence. Because, of course, that’s where the actual due diligence happens. Where the entire khandaan of your potential husband is likely to stalk you to death, to make sure you’re the ideal, dutiful bahu they’ve been seeking all along.

Then someone, a certain human being (read: the overenthusiastic Verma aunty, panditji, or even people who have managed to make an entire business out of the brokerage of proposals) or technology (matrimony websites) acts as a platform to view and like profiles and initiate communication.

And before I know it, I have an entire menu of seven eligible bachelors, whom I have been set up to meet. Clearly, my kin has been working hard on what I’ve nicknamed the PGDM (Project Get-the-daughter-married).

No pressure, beta, papa says. Meet the boys, and only if you like them we will pursue the proposal.

All of a sudden my social life is on a high. Every single night of the past week, I have been meeting a different boy. And broadly, I’ve categorized them into seven stereotypes.

The Family Guy: Will remind you of all the things that you will be expected to do as the ‘bahu’. Puja every day. Give the mother-in-law company while she watches her favorite serials. Oh, and how would you rate your samosa making skills, may I ask? Because my mother likes hers perfectly triangulated, thank you very much. And I’m leaving, because I like my independence very much, I reply. You’re welcome.

The NRI: Will talk to you with an accent even if he doesn’t have one. Will show you pictures of his suburban country house in California, or his posh penthouse in New York, or the snow in Toronto, or the skyscrapers in Singapore. His new Lexus. His husky, who he had to leave at the expensive doggy daycare because his mummyji insisted he come to India on a bride-hunting spree. And then he will tell you how he’s finally agreed to getting married because he misses ma ke haath ka khaana. And I promise to share with him the number of my cousin’s classmate’s niece who lives wherever he does; she runs an Indian cuisine catering company, you see. Much cheaper than taking home a glorified housemaid, no?

The Narcissist: Loves one thing clearly. Himself. That’s all he talks about. His achievements. His accomplishments. What his boss/neighbors daughter/Meerut wali mausi thinks of him. Whatever happened to ‘tell me something about yourself?’ And after every nerve of patience in my being has clearly been tested, I get up abruptly because there’s no way I’m dealing with this. That’s when the gentleman asks, “What happened to us getting to know each other?” To which I ask, “Where is the other?”

The Closeted MCP: A classic case of hypocrisy on steroids. I will assure you that he wants a wife who works and has professional aspirations of her home, but well, she should be home before he is. You know because, otherwise, the neighbors will talk. Kitty parties are fine, as long as they’re women-only affairs. Also, because he’s very ‘broad minded’, his would-be wife can wear whatever she likes, as long as she takes his permission. Well, I do need your permission, I say before he can utter another word. May I leave? I’m utterly disgusted by your chauvinism, you see.

The Liar-in-Chief: Claims he is vegetarian, teetotaler, non-smoking and virgin. Did you just jump out of an Ekta Kapoor serial? Because you could have given all the female protagonists a run for their money. Oh, and you might want to delete your pictures off Instagram because they tell me a completely different story. Oh, and did I mention that your ex-girlfriend is my colleague’s sister? Small world, eh? Especially mine, since there is no place for folks like you in it.

The Pseudo-workaholic: The first question I am asked by this gentleman is what my favourite font is. Arial? Times New Roman? Helvetica? Eh? Will not stop talking about how ambitious and career-oriented he is, and how much he enjoys his work.  Spends pretty much the entire evening, on his phone. I’m sorry, it’s an important email from work like he works for the FBI, where a top-notch mission will be aborted if he doesn’t respond to emails immediately. And then when I finally think the conversation has begun, he interrupts midway. Excuse me, but would you mind if I took this urgent call. It’s with a client in Germany. Sure, I say. Our friend spends the next couple of minutes talking to some client in Berlin about an uber critical business deal, when suddenly, in the midst of the conversation, his phone rings. So much for pretending to be busy. That’s when I decide I’ve had enough. Excuse me, but would you mind if I left? I’m not one for false pretenses, you see.

The Cheapskates: When the check comes, he insists on paying. And before he’s taken it, you say that you think you need some more time to think about him. And as a reflex reaction, he pushes the folder to your side of the table. Maybe we should just split the check, he says. Of course, I smile, especially since this is the last time we’re meeting.

What a week. So much to get married. Aargh, the mind screams at the end of it. And that’s when I announce to my family that I am not interested in either of the male specimens that I have been introduced to in the past week. Maybe my life will have a KJo moment, where someone comes rushing in, and flowers drop and violins play. And until the day that doesn’t happen, I don’t think I’m in the mood to meet with potential suitors.

And after this entire spectacle, just as I’m getting ready for myself into bed that night, my mother comes up to me and says, “Beta there’s a new rishta that’s come our way. Meet the boy once. You can reject him if you want but just meet him once, please?”.

Expert Talk: 8 Foods You Can Add To Your Diet To Improve Gut Health