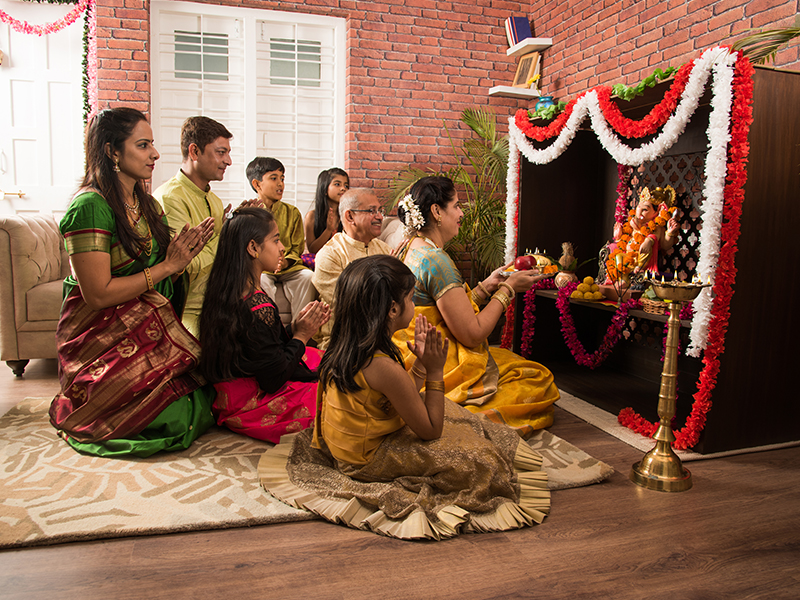 Ganpati Bappa Moriya! Ganesh Chaturthi is one of the grandest festivals celebrated across the country for 10 days that reverberates divinity, celebrations and splendour. Think Ganesh Chaturthi, and the beautiful Lord Ganesh idol comes to mind, the aroma of his favourite modak tickles your appetite and excitement just fills the air. Devotees feast on favourite delicacies like karanji and modak. Soul-stirring chants rent the air as people sing bhajans and offer prayers amid the beating of drums. Just thinking about it gives goosebumps, right?

From modak to puran poli, this 2021, here are some classic Ganesh Chaturthi recipes as you celebrate new beginnings with Bappa and your family.

Also, watch this video for a classic modak recipe, after all, no Ganesh Chaturthi celebration is complete without delicious mouthwatering modaks!

Among the various pandals across Mumbai, Lalbaughcha Raja in Central Mumbai, with the 12-foot tall idol towering over the devotees, attracted huge fanfare. The second-longest immersion procession takes place in Andhericha Raja. And some other popular mandals in Mumbai are Ganesh Galli, Khetwadicha Raja in Grant Road, Chandanwadi Ganesh mandal in Kalbadevi, GSB Seva in Matunga, Gaondevi Sarvajanik Ganesh mandal, in Girgaon, Tilak Nagar Ganesh mandal at Chembur and few others. Though Covid-19 restrictions may not allow you to visit these places, the internet has several live video feed options for all Ganesh devotees.

Ganesh Chaturthi is observed during the Hindu calendar month of Bhaadrapada, starting on the shukla chaturthi (the fourth day of the waxing moon). In 2021, ‘Chaturthi Tithi’ will begin at 12:17 am on September 10 and will continue till 10 pm. Usually, people get up early with enthusiasm and clean the temple in the house. Then durva ghas, ladoos and modaks are offered to Lord Ganesh. The worship of Lord Ganesh is completed with the aarti. Now that you know about the vidhi timings, here are some lesser known facts surrounding Ganesh Chaturthi.

15 Facts About Ganesh & Ganesh Chaturthi You Would Love To Know

Ganesh Chaturthi is not just a day of festivities in India, it is so much more. Did you know that you can trace back its origin to India’s fight for Independence? Lord Ganesha, the Vighnaharta is also worshipped overseas. Confused? Read on to know some really interesting facts about Ganesh Chaturthi that will surely be mesmerising.

1. The First Ganesh Chaturthi Celebration Dates Back to The Era Of Chhatrapati Shivaji Maharaja

Lord Ganesha was a popular deity worshipped across India. And Ganesh Chaturthi remained a homely affair. In the year 1893, freedom fighter Bal Gangadhar Tilak transformed the festival from a private celebration to a grand public event to unite India against the British. For Ganesh Chaturthi, Tilak put out huge hoardings of Lord Ganesha on pavilions in Mumbai. He even encouraged huge Ganpati statues and public celebrations.

Lord Ganesha’s divinity isn’t just spread across India. In fact, his blessings travel all the way across the boundaries of India. But his depiction differs from one region to another. The posture and weapons in his hand are quite different. China worships a deity called ‘Kangi Ten’. They are two elephant-headed figures embracing each other. Lord Ganesha also makes an appearance in Indonesia’s Rs 20,000 currency note. Cambodia worships a God called ‘Prah Kenes’. Cambodian Ganesha images of the pre-Khmer period depict the Lord with wide, fan-like ears, no neck, no-head dress and no-pot belly.

4. It’s Considered Unlucky To Look At The Moon During Ganesh Chaturthi

During Ganesh Chaturthi, while you revel in colourful celebrations and gorge on delicious mithai, make sure you don’t glance at the moon. Why? Because it’s considered unlucky to do so. Lord Ganesha, who is at times represented with only one tusk, is known as Ek Dant. According to Hindu mythology, Ganesha once broke his tooth and hurled it at the Moon for laughing at his belly. He even cursed the Moon. Although the curse was undone, the myth about looking at the moon as a bad omen still remains.

Lalbaugcha Raja Mandal is one of the oldest mandals in India, set up in 1934 in the Peru Chawl locality and the face of Ganpati at this mandal is patented. The chawl was shut in 1932. And the locals, who were fishermen and vendors, promised to get a Ganpati and set up in the place. The first-ever Lalbaugcha Raja was set up by fishermen. Kambli family in Mumbai, have designed and created the Ganpati idols since 1935. Lalbaugcha Raja hosts the longest immersion or Visarjan procession in India. It starts all the way at 10 am in the morning and ends the next morning. Did you know that the second-longest immersion procession takes place in Andhericha Raja?

6. There Are 16 Ways Of Paying Tribute To Lord Ganesha

7. Bhog Prasad Is Not Limited To Modaks

8. There Are 2 Legends of Ganesha’s Birth

One is the most heard where Goddess Parvati created Lord Ganesha out of dirt off her body. The other legend says that Ganesha was created by Shiva and Parvati, at the request of Devas. The Devas wanted Ganesha to be a vighnakartaa (obstacle-creator) in the path of rakshasas and a vighnahartaa (obstacle-averter) to help the Devas.

Throughout Ganesh Chaturthi, Vedic hymns from the Rig Veda, the Ganapati Atharva Shirsha Upanishad, and the Ganesha stotra from the Narada Purana are chanted. It is believed that reciting 108 names of Lord Ganesha during the festival brings good luck to the devotees.

10. Ganpati Is Worshipped Before All Gods

It is believed that Lord Shiva gave a boon to Ganesha that he would be worshipped before any other Lord. He was thereby declared superior to all gods. This is why whenever you start worshipping or praying before a new task, you take Lord Ganesha’s first.

This tale is believed in West Bengal and the tale says that once Goddess Durga was devouring food. Ganesha asked his mother about this plight. To this, Goddess Durga replied; “What if your wife does not give you enough food to eat after you get married?”. Then, Ganesha went to cut a Banana tree and gave it to his mother saying; “This is your daughter-in-law”. So, even today during Durga puja, a banana tree wrapped in a saree and adorned with vermilion is placed on the right side of Lord Ganesha as his wife.

12. Original Writer Of The Mahabharata

13. His Footprints In Other Faiths

Lord Ganesha is not only worshipped by Hindus but by Buddhists too. In Buddhism, Ganesha is referred to as Vinayaka and is worshipped in countries like Tibet, China, and Japan. His wisdom, knowledge, and ideologies are revered by devotees from everywhere.

15. Most Popular Places For Ganesha Idols

Apart from Mumbai and Pune, one place which flourished and mastered the art of making Ganesha idols is Maharashtra’s Pen district. Close to 500 workshops and over 800 artisans makeover 7 lakh idols every year, which also get exported to the UK and US.

Find how to choose the right murti & perform an eco-friendly visarjan here.

As much as people love welcoming Lord Ganesh to their house every year, it also makes them sad when he leaves. But both his welcome and his farewell are done with the same amount of devotion in the heart. Celebrate Ganesh Chaturthi and your devotion to Vighnaharta with utmost love. And if you have a special ritual or story, let us know in the comments!

PCOS & Menopause: Gynaecologist Shares What You Should Know