Extended Breastfeeding—How Long Is Too Long? A Lactation Consultant Shares The Pros & Cons 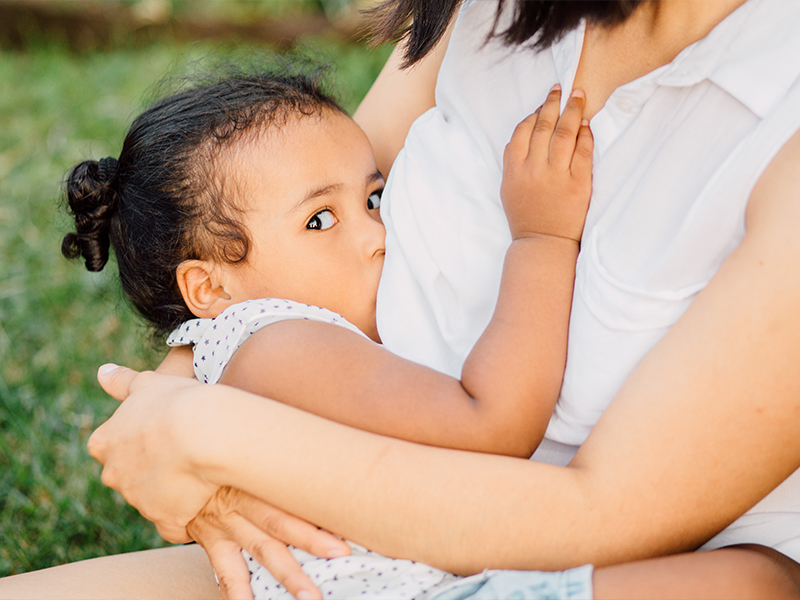 Most major health organizations recommend nursing your baby for a minimum of 12 months, but many health professionals recommend even longer than that. While some may raise an eyebrow, it is common to breastfeed your baby even after 12 months, in some families. Extended breastfeeding is a healthy and reasonable option for mothers and children who aren’t ready to wean. The World Health Organization (WHO) takes it a step further by recommending that babies be breastfed for 2 years or more, as long as all their nutritional needs are being met.

To understand and get a deeper insight on the topic, TC46 got in touch with Certified Lactation Consultant Arushi Agrawal, who shares her knowledge about an extended breastfeeding period, benefits and downsides.

1. Extended breastfeeding can be recommended for up to 2 years, and the choice to do so is yours

It is entirely up to you and your child how long you breastfeed. If loved ones — or even strangers — offer advice on when to wean, tell them that the choice is ultimately yours.

2. Extended breastfeeding can boost immunity and increases the mother

Extended breastfeeding is not welcomed by a lot of people and they have their share of criticism but we can’t deny the fact that it comes with its own set of benefits.

3. Extended breastfeeding comes with its own set of drawbacks

Extended breastfeeding is a wonderful option for many families, but it is not without its limitations and concerns. Here are some of the most common issues that parents have while considering breastfeeding for longer periods.

There’s no doubt that prolonged breastfeeding isn’t always well-received by the general public. Although many parents nurse their children beyond the age of one year — and even beyond two years — it’s not always a topic that’s discussed freely, and there’s a stigma associated with it. It’s a completely natural and comfortable experience for someone who has nursed a toddler or infant, but it’s moreover judgmental for those who haven’t.

While most women believe there are no disadvantages to nursing a child for a long time, there might be some aspects that should be highlighted which bring around some uncertainty to long-term breastfeeding.

Breastfeeding, according to many critics, is detrimental to a child’s health and psychological well-being. They argue it makes children dependent, limits their freedom, and makes it difficult for them to separate from their parents. However, no evidence can prove this baseless argument. On the contrary, the American Academy of Family Physicians has claimed that breastfeeding even after the age of one can lead to ‘better social adjustments for the children.’

6. Create boundaries with your child if you breastfeed beyond the first year

First, the mother needs to feel OK about all the new changes she is about to bring. She needs to take care of herself mentally and physically. When the baby starts getting older, it is normal for some mothers to step back down from breastfeeding on demand. It might not always be possible for the mother to do so. You might be drained completely throughout the day. So, you can start by setting a fixed feeding schedule. A lot of mothers try to breastfeed only during the night time to make the baby fall asleep. But it’s up to you whatever time you want to choose. You can tip the child off with some snacks, it serves as a very good distraction. But, you would want to do it only sometimes. Don’t overdo anything and jump right back. Take one step at a time. And everything will start getting in order. Now, we are not saying that you have to essentially start weaning off the baby, it is up to you.

7. Night time nursing can be done if it suits the mother

Many toddlers even want to nurse in the middle of the night. It’s completely natural, but it still shocks a lot of parents. Go ahead and nurse at night if it suits you. If it doesn’t, you should start weaning your child at night. Air, a back rub, or other calming methods may be used to replace overnight sessions. Some parents discover that a partner must step in for a few nights because their child will only nurse if the breastfeeding parent is present.

If night weaning isn’t working, wait a few months and try again when your child is furthermore ready.

8. Talk to your child about weaning

Many breastfeeding toddlers can wean on their own. If yours won’t cooperate and you want to speed things up, simply talk to your chap. Your kid knows what you’re saying by the age of two. Let her know that breastfeeding will be ending soon, but that mommy will always be around to play, read, snuggle, and tickle her belly. To assuage her fears of abandonment, schedule some extra fun “mommy and me” events. It may also be helpful to explain that graduating from nursing school is something that big kids do and that it is something to be proud of.

9. Dealing with criticism for extended breastfeeding

When you start breastfeeding you have to adapt to an entwined journey of sleepless nights, sore nipples, postpartum depression, just trying to do your best, keeping yourself from going nuts and continue to breastfeed.

There is one thought we always get stuck with at a point, ‘when to stop breastfeeding.’ After a while, you get used to it and start liking that inseparable bond with the child. And you want to hang on to those lovely cuddle sessions, those snuggles, those you and your baby’s special time. People are there to give you all types of advice and comments like – you should stop now, you are spoiling him, oh my god you still breastfeed your toddler; he’s too big now, let the habit go. Don’t let all of them get to you, do what’s right for you and the baby, your instincts will know better when to stop.

Self-Starter: Manjri Agarwal On How You Can Make A Lucrative Career As A Health Coach