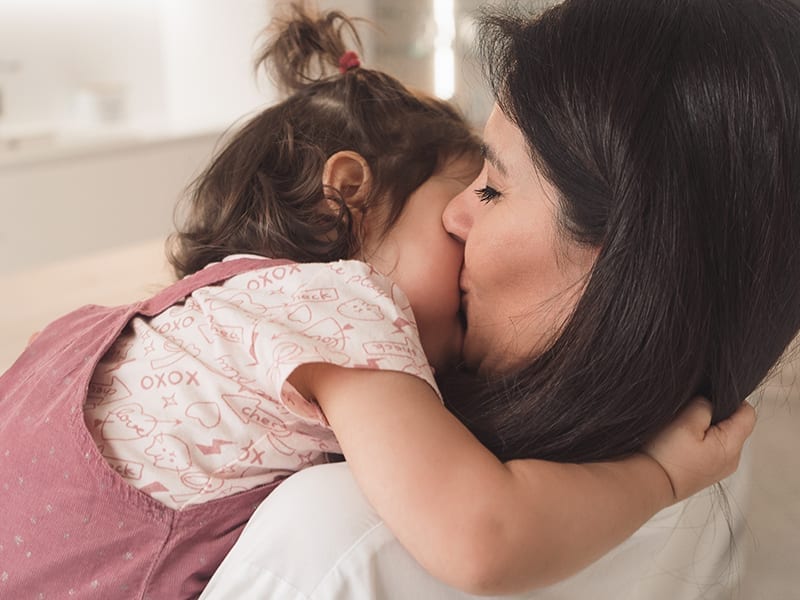 From “iss baar bhi ladki hui” to “hamari beti, hamari shaan”, India has indeed made progress. From scientists to chefs, high-ranking army officials to celebrated athletes and new-age entrepreneurs to global influencers, Indian daughters have proven that the sky’s the limit. And the proud parents of these betiyaan, especially their mums, have a lot to say.

Celebrating International Girl Child Day, here is a funny Team TC46 video of all the famous dialogues mothers day to their daughters.

“The first time I experienced my baby’s kick it felt like a POP in my stomach and we started calling her popper. Every time we used to call her out referring to her as popper, she was sure to kick. Even after she was born, I checked if she still reacted to this name and she did.  This happened for a few days after her birth, not sure if this was something I was imagining or it was real but it sure did feel real and was an amazing experience.

Now, Nia is 2.5 years old and we do yoga together and my Popper calls me Yoga Mumma. Her referring to me as Yoga Mumma will always be special to me for all my life. I’m so proud of my baby girl already, and she’s a piece of my heart.”

“I’m one of three daughters, and I have three daughters. I’ve never even thought about what it would be like to have a son. It never mattered. What mattered was that my father brought us up to be no different, and want no different than the men in the society, and I and my husband did exactly the same for our kids.

I was married at 18 (the times were such) and had all three kids before I turned 26. But at 32, I went back to college and got my degree in fashion. I then started my own retail business and I had a successful and flourishing career till the age of 48, after which I decided to slow down by my own choice.

My daughters in their formative years were being raised by a working mother who had established herself in the glamorous world of fashion, travelling, closing deals, and closing year-end accounts. My husband also created an environment of informed choices. Whether they wished to take on unconventional career paths, marry men who weren’t Punjabi (none of my son-in-laws are!), move to another country, or make financial decisions independently, as parents, we chose to raise our daughters by giving them all the information and enabling them with tools to deal with their decisions — not with gender ideas and societal norms and limitations.

My hope is that by leading by example, my kids will be able to do the same and much more for their kids, so that the whole topic around sons vs daughters is closed and becomes irrelevant… because it really is irrelevant.”

“As a child, Akshita was being pampered by both my husband and me. She is the first of three children, and everything that I did for her was very special as it was my first time as a mother too. One of my favourite things to do with Akshita was doll her up — with matching frocks, shoes and hair clips. No wonder in all her childhood pictures, she looks like quite the fashionista!”

4. The Strength Of Motherhood

I had always envisioned my life to be complete. Didn’t want to make room for any hiccups but little did I know that I would end up being a single parent. I have a beautiful daughter who made my life wholesome and brought meaning in it, that’s all that mattered. The best part about being a single parent is that you get to make your own decisions – good, bad, ugly. They are your decisions, you don’t have to ask anyone and you face the consequences accordingly.

I am an air hostess and my work is so that I’m not home for a few days in a stretch so it was heart wrecking to leave my daughter at home alone. It was difficult to go for flights thinking about her constantly. I had to make some adjustments in life and send her to a hostel in Pune but at the end of the day, everything turned out to be a success story. My daughter is so understanding, lovely and has a heart of gold. So single or not, I’m proud of us.

“I always wanted a girl and I was elated the day my daughter was born. She is equal parts funny and earnest and raising a child like her was extremely easy since she did most of her work herself. I never had to nag her. Sometimes we have our moments, but that’s again a part of life. I would always want her to be my daughter, time and again, in every lifetime if possible.”

“After I gave birth to Yashna, my in-laws pressured me to have another child hoping it would be a boy. Despite medical intervention and a couple of tries, I wasn’t able to conceive. But, this really took a toll on me emotionally and physically. Yashna, to me, was the only child I needed. To my pleasant surprise, years later, I was pregnant again (unplanned) and throughout that time, my relatives would ask my daughter whether she wanted a baby brother or a baby sister, and her answer would always be baby sister. But they would all push her to want a brother, and even discussions at home about the announcement gifts for the new child would lead to them proposing a more expensive gift if it was a boy. My 13-year old daughter couldn’t understand or accept this unfairness and spoke up to her grandmother.

As a child, she witnessed her very educated grandmother being disappointed and upset when I delivered yet another baby girl. She realised early on that education had not, and could not change the mentality of the older generation.

Today, my elder daughter is very protective of her sister. She talks about wanting her to be strong and independent and is terrified when she reads the news about young girls being raped and cyberbullying cases like the Bois Locker Room. She’s like a parent herself and always talks about how parents of the new generation of boys need to raise them to be better men.”

“There’s a heartwarming song in Marathi that translates to: If God ever appears before me, and asks me what I want, I will tell him to give my years (life) to my child. After singing this to Ketaki when she was a child, I now sing it to her baby boy. I didn’t realise how quickly the years passed and my daughter became a mother.

I am proud to be her mother. She is my only child, and for a while, her father and I wished she had a sibling, a companion. But as she grew up and we grew with her, we realised she was our daughter and son.

One day her father passed away suddenly, leaving me all alone. That day, Ketaki stood beside me, with immense strength, as if she was my own mother. She did all the rites and rituals a son is expected to do and did so without fear or tears. She is my pride. If there is a next life, I would wish to be born as her child.”

“The single most beautiful moment of my life is my daughter’s birth. Immensely satisfied, I feel proud to be the mother of the best child. My daughter Srushti is the most precious gift from life. She is my world.

When she first got her period, she surprised me with her abundance of knowledge and a calm attitude. As the years go by, I have been learning so many new things from her. Her ability and openness to have amazing conversations about a variety of topics, some that I was taught to be considered taboo even, always catches me by surprise. Our bond keeps growing into a mother-daughter relationship that’s more and more like a friendship.

She has a great world view and is the most empathetic person I know. While she may put on a tough face, she is one of the most loving and caring people who are willing to do anything for their loved ones. From making me indulge in self-love by treating myself to feeding me delicious food, she sometimes takes the role of the mother. I strongly believe in the saying: Give a girl wings, and see her soar.”

From Mother To Daughter: Real Women Share Stories Of Heirloom Jewels They Received From Their Moms

Diarrhoea Or Constipation During Periods? 10 Tips To Deal With This Stomach Ka Gadhbadh