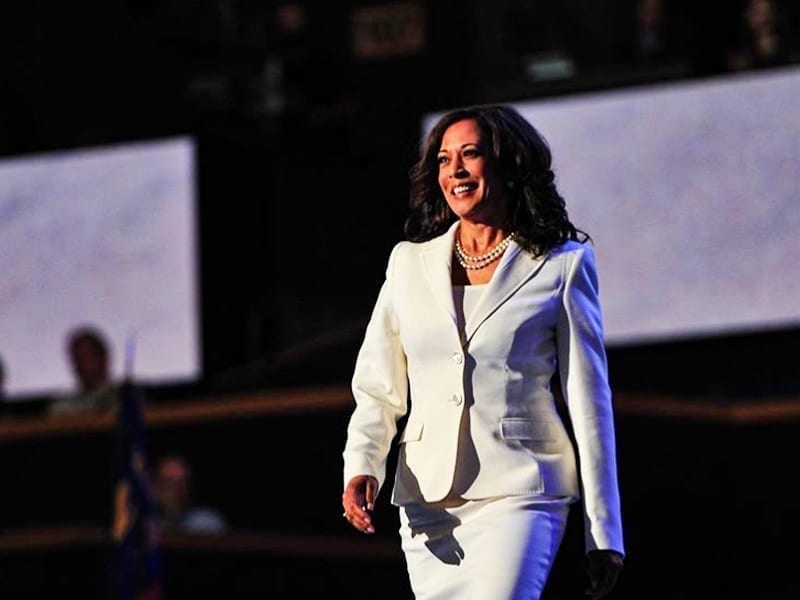 Kamala Harris’ acceptance speech as the running mate for Joe Biden was a highly anticipated one. But her mentioning the word ‘chithi’, Tamil for mother’s younger sister, sent social media into a frenzy. She said, “my uncles, my aunts — my chithis” while referring to her Indian roots. Harris recalled her mother, Shyamala Gopalan’s lesson “to be proud, strong Black women. And she raised us to know and be proud of our Indian heritage”.

5 Things We Love About Kamala Harris

In the highly debated topic of pro-choice or pro-life, she has been standing up for women’s right to abortion. Since her election to the Senate, Harris has maintained a 100% rating by the abortion rights advocacy group, Planned Parenthood Action Fund.

“I believe that healthcare should be a right, but the reality is that it is still a privilege in this country. We need that to change.” This is her stand on universal healthcare that will help shorten the gap between the rich and the poor in ways they receive healthcare.

In October 2019, Harris announced her ‘Children’s Agenda’, which included her proposal to create a national paid leave program that would guarantee up to six months of paid family and medical leave for all American workers, including part-time employees and independent contractors. Kamala Harris knows the importance of immigrant Dreamers and DACA recipients for the US economy to rise. In 2017, she said she would oppose any end-of-year government spending bills unless Congress acted to protect young people affected by DACA. In June 2019, she also announced an immigration plan that would have used “executive actions to remove the threat of deportation of millions of undocumented people”.

Harris supports the Green New Deal and wants to build a clean economy that creates jobs. In 2029, she revealed a plan calling for $10 trillion in public and private funding to build infrastructure, clean energy, and climate resilience measures. These, she said, will create millions of new jobs. Not only did the plan call for net-zero carbon emissions by 2045, but it also called for a carbon-neutral electricity sector by 2030.

And she is making history by being the first Indian-American to be selected for the second-highest elected office of the United States after the President. She is also the first African-American to be nominated as a vice-presidential candidate by a major political party. If elected Kamala Harris will be the first-ever woman Vice President of the US.

10 Great Ways To Repurpose Makeup Products That Have Expired