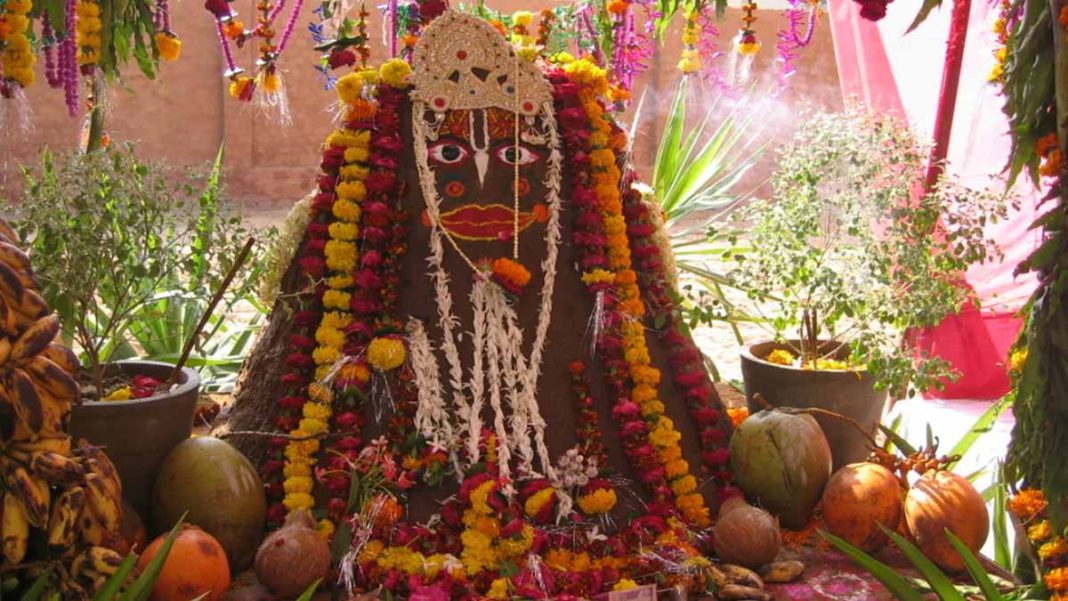 Govardhan Puja focuses on worshipping Lord Krishna. Cereals like rice, wheat, leafy vegetables, and curry of gram flour are offered to the Lord while performing his puja. Govardhan parvat is also worshipped on this day by making small hillocks from cow dung. While still others make a small idol of Lord Krishna, decorate it with candles, and then worship it. Women of the family keep a day-long fast.

However, in certain communities, Lord Vishwakarma, the God of machines is worshipped. The women in the household worship all the machines in the house and put a tilak on each of them. The ritual is followed by offering prayers to Lord Krishna. There is also a custom of gifting money to the womenfolk of the house. This year, this festival is on 26th October. It is held on the fourth day of Diwali.

According to Vishnu Puraan, the Hindu legend, the inhabitants of Gokul in Mathura believed that it was Lord Indra who had granted their wish of making rains a reality for the town. However, Lord Krishna informed them that it wasn’t Lord Indra but the Govardhan parvat at Braj, near Mathura, which had caused the rain. Hence, they started worshipping the Govardhan parvat after the revelation by Lord Krishna.

Lord Indra was infuriated when the residents of Mathura did not worship him. He retaliated by bringing heavy rains to the town. Lord Krishna came to their rescue and after offering incessant prayers and offerings to the parvat, he was able to lift it up on the little finger of his right hand. He then brought the mountain over the town of Mathura, which acted as a shelter over the heads of the inhabitants, saving them from the ravages of the heavy showers. From then on, Lord Krishna was given the respect of being called Giridhari or Govardhandhari.

Govardhan is also referred to as Annakoot, which literally means “mountain of food”. It is a tradition to prepare 56 or 108 varieties of dishes as an offering for Lord Krishna. This is referred to as the bhog. Deities in the temples, especially at Mathura and Nathdwara, are given a milk bath and then dressed in elaborate, shimmery outfits and expensive jewellery made of rubies, pearls, and diamonds. They are then worshipped and offered the bhog. This bhog is arranged in front of the deities in the shape of a pyramid to make it appear like a mountain, defining Govardhan Puja significance.

Some communities in India celebrate Gudi Padwa on this day. Wives put a tilak on the forehead of their husbands and then garland them, praying for their long life. In return, the husband offers a gift as a token of showing their love and affection. There is also a tradition to invite newly married daughters, along with their husbands, to a grand feast and are then presented with gifts and sweets.

Govardhan Puja significance in Maharashtra and South India is that the day is celebrated as Bali Pratiba, Bali Padva, or Bali Padyami. It is believed that Lord Vishnu had pushed the demon king Bali to hell or patal lok on this day. Some other legend believe that it is on this day that King Bali left behind patal lok and started ruling over Bhoo lok, given to him as a boon by Lord Vishnu. As a result, the day is referred to as Bali Padyami.

Govardhan puja may be observed in slightly different ways among various communities in India. But what remains the same is the essence of the pious day – that of paying respects to the act of kindness of Lord Krishna or Lord Vishnu towards mankind. So, pay your obeisance to the deities and usher in peace into your lives.

Buzz 46: Celebrating Pandit Birju Maharaj With 5 Songs You Can Perform At The Next Sangeet

Everything You Need To Know About Baby Kicks During Pregnancy