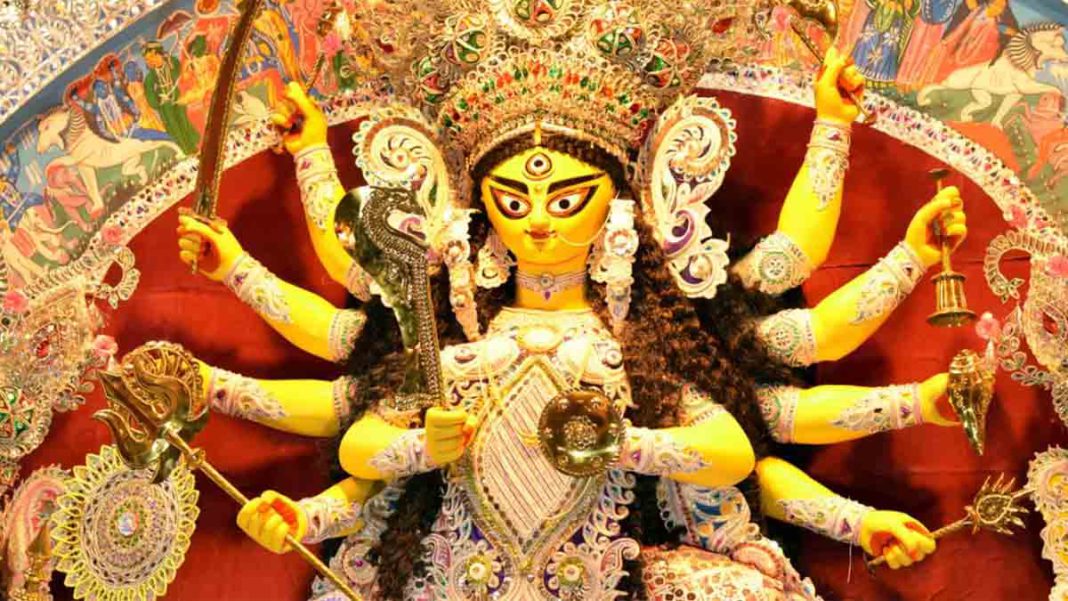 The dhoom dham of Navratri coincides with another grand festival in India. Durga Puja. Both the festivals pay obeisance to different avatars of the same Goddess, both are a celebration of the feminine energy. It is an auspicious five-day festival that originated in the Indian subcontinent and pays respect Maa Durga. It commemorates the triumph of good over evil, as Goddess Durga assassinates the demon king Mahisasur. According to Hindu legend, the Goddess comes on an annual visit to her paternal abode on earth, along with her five children, during these days to bless her worshippers.

While the rituals include ten days of feasting and worshipping, the final four days—Saptami, Ashtami, Navami, and Dashami—are celebrated with great shor sharaba among Bengalis in India and abroad. The ten-armed Goddess riding the lion, her bahan, is worshipped with great passion and devotion.

Durga Puja festival is very important to the Bengali community. However, it is also celebrated in other states such as Odisha, Assam, Tripura, Bihar, and Jharkhand. People start making preparations to welcome the Goddess on Mahalaya, the day before Ekadashi.

But are you aware of the Durga Puja history? Let’s learn about Durga Puja significance and importance.

According to Hindu legend, Lord Brahma granted the demon king Mahisasur the blessing of invincibility, which meant that no man or deity could slay him. After receiving the benediction, Mahisasur assaulted the gods and chased them out of heaven. To defeat the demon ruler, all the gods gathered to worship Adi Shakti. Maa Durga, the woman brought to life to defeat the demon king, was created by the divine light that emanated from all the gods during the puja.

Maa Durga’s battle with Mahishasur lasted ten days. On the tenth day, Goddess Durga killed the demon ruler, and hence the day is celebrated as Vijaya Dashami, one of the durga puja significance, symbolising the triumph of good over evil. Vijaya Dashami coincides with Dussehra of the Navratri festival.

People believe that Maa Durga visits earth with her children in tow to bless her followers. A plethora of rituals take place in the 10-day celebration of the Durga Puja festival but the last 5 days are observed with an even greater fervour. Here are some popular rituals and rites that worshippers partake in:

Durga Puja celebration starts with Sosthi or Shashthi. It is said that Lord Ram began this ritual in order to enlist the Goddess’s help in fighting Ravana. As a result, the Goddess must be specially called through the Bodhon ceremony, which is done at twilight. Several other rituals are done during the day previous to this, such as ensuring the Goddess that all rites would be completed according to the expected standards, preparing the location of worship, and so on.

While the priests recite mantras to worship Durga Maa, everyone else can pay their respects with Pushpanjali, or Anjali for short, which means offering flowers cupped in your hands. Anjali is done on all three days of the Durga puja festival, Saptami, Ashtami, and Navami, although the one on Ashtami holds the most significance. Anjali’s auspicious hour, which is always in the morning, is proclaimed ahead of time. It is traditional to fast until the day’s Anjali has been offered. However, a certain section of the Bengali community devours on hilsa as a part of the Ashtami bhog, after offering it to the Goddess.

Kumari Puja is performed on the eighth day. A pre-pubescent girl is chosen to be the living manifestation of Durga and prayers are said in her obeisance. She takes the stage with the Goddess, dressed in new garments and adorned with floral accessories.

Sandhi Puja takes place when Ashtami ends and Navami begins. It commemorates the appearance of Goddess Durga in her enraged Chamunda avatar to destroy the demons Chanda and Munda. One hundred and eight lamps are lit. Mantras is chanted by the priest. And the drummers (dhaki) start pounding out a frenetic beat. Previously, it was also common to make an animal sacrifice. However, this practice has largely been stopped, and vegetables are symbolically sacrificed.

This is one of the chaotic but entertaining rites performed on Navami (ninth day) evening. Clay pots containing burning charcoal are held by people as they begin to dance to the beat of the dhaak. Those with more experience hold the clay pots on their heads, sometimes even by their teeth. Previously a male-dominated art genre, dhunuchi naach is now also performed by women.

Traditionally, Hindu women wear sindoor on their forehead to mark their marriage. Sindur Khela is one of the rites in which married ladies present sindoor and sweets to the Goddess. They then smear each other with vermillion. Photographers have a field day during this rite. Some women have recently begun to challenge the custom of not allowing widows and LGTBQ+ community to attend the event.

The Goddess and her children are led in a parade to Bisorjon or are immersed in the river to symbolise her return to Mount Kailash. Even today, some traditional houses (bonedi bari) retain the habit of placing the idols on a bamboo platform and then emn of the family carry them on their shoulders. Most, though, transport the idols on a truck up to the riverbank. The idols are then placed on a boat and transported to the middle of the river for immersion.

Did you know that Durga Chandi path is a holy scripture that contains 13 chapters of the Markandeya Purana detailing how Maa Durga kills the Demon Mahisasur. People recite Durga Chandi path to drive away negative energy and keep troubles at bay.

No Indian festival is complete without prasad, Durga Puja celebration is no different. Bhog is given to devotees on the seventh (Saptami), eighth (Ashtami), and ninth (Navami) days of the celebration. It is usually vegetarian and has no onion or garlic. Bhog consists primarily of Bengali delicacies such as khichuri, luchi, labra, begun bhaja, chutney, payesh, mishti doi, and roshogolla.

Here are two delicious recipes you can try out if you’re celebrating durga puja at home:

Bengali Khichuri, also known as bhoger khichuri, is a one-pot dish cooked with moong dal, rice, and a few spices. To make it you will need:

Whether you’re celebrating Durga Puja at home or going all out, let your bhog thali #BeALittleMore festive ready with these recipes. Happy Durga Puja!

Budget Shopper: 10 Winter Shoe Styles That Are An Absolute Steal