Buzz 46: Highest Ever In History, The Supreme Court Now Has 4 Sitting Women Judges 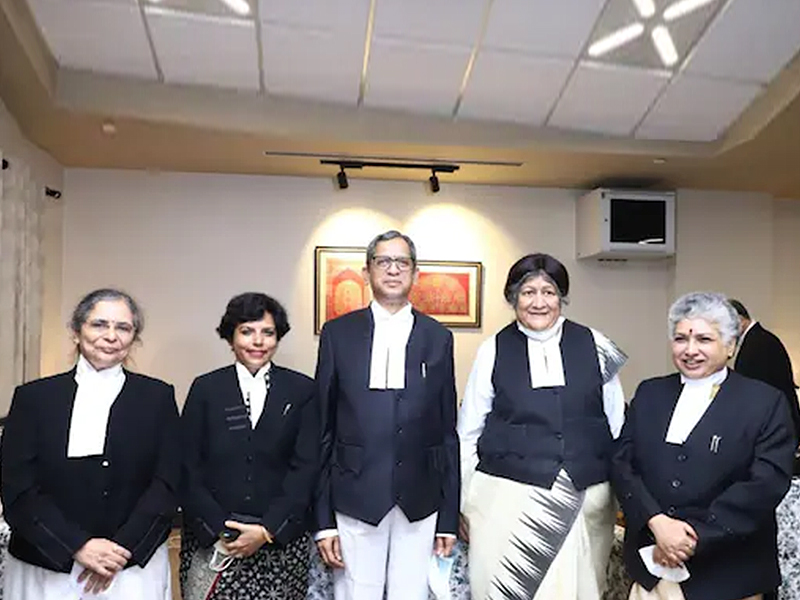 It took almost four decades for the Supreme Court after its establishment to have its first woman judge. Now, in a historic moment for gender representation, three women took oath as judges of the new Supreme Court of India on 31st August 2021. They will be serving along with Justice Indira Banerjee. In a first, three women judges out of the total of 9, took the oath of office as judges of the Supreme Court on Tuesday. The nine new judges who were administered the oath of office are Justice Abhay Shreeniwas Oka, Justice Vikram Nath, Justice Jitendra Kumar Maheshwari, Justice Hima Kohli, Justice B V Nagarathna, Justice C T Ravikumar, Justice M M Sundresh, Justice Bela M Trivedi and Justice P S Narasimha.

In an emotional speech delivered by Justice BV Nagarathna on August 27, 2021, she had said, “The message from this leaf in my book which I want women advocates to take note of is, that with access to the right opportunities, each one of you can achieve your dreams. I, therefore, urge each one of you to seek out these opportunities armed with faith in yourself and stride ahead to achieve all that you want to and also give back to society.“

The first woman Chief Justice of the Telangana High Court, Justice Hima Kohli is the ninth woman to be elevated to the Supreme Court in its history of seven decades. Justice Hima Kohli is known for her firm approach in enforcing executive accountability and defending women rights. Justice Kohli was also appointed as an Additional Judge of the Delhi High Court in 2006 and was made a permanent Judge the next year.

Justice Indira Banerjee was appointed as a permanent judge at the Calcutta High Court on February 5, 2002. She was transferred to the Delhi High Court in August 2016. Banerjee assumed charge as the Chief Justice of the Madras High Court on April 5, 2017. She was the second woman in India to hold the position. In 2018, she was elevated as the Judge of the Supreme Court of India. She is the eighth female judge in the history of the Supreme Court and was the only female judge there till the entry of the new sitting women judges.

Not only are these women breaking age-old patriarchial norms but also excelling in what were traditionally considered male-dominated fields. Get inspired by these influential women leaving their mark on the world and excel in whatever you choose to do!

10 Possible Reasons Why You Missed Your Periods, According To A Gynaecologist