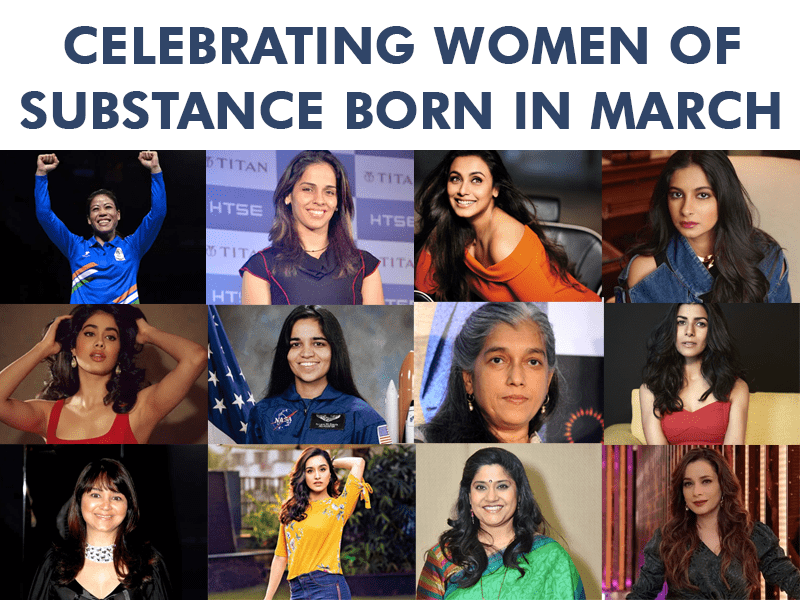 Who runs the world? Girls! Women truly are bosses who can lead and can create waves in any industry. Not only shattering glass ceilings, but they can also roll out the red carpet and pave the way for future generations. Be it Mary Kom punching all stereotypes out of the way or Renuka Shahane shining through with her Hindi directorial debut, March is packed with women who deserve all the recognition and more! Not only have they created paths for themselves, but also inspired young women all over the country to do so! They have captured their audience’s heart not only by their on-stage performances but also off-screen.

TC46 salutes powerful #BharatiyaaNaaris who was born in the month of March.

Boxing Legend MC Mary Kom is a six-time world champion, holds the record for the most number of medals at the world championships, a mother to her four children, a member of the Indian parliament and an Olympic medallist. Hailing from a small village in Manipur to being the first woman from India to feature in boxing in the 2012 Olympics, Mary Kom had the honour of carrying the tricolour after she shined in the games. Mary Kom is a household name for her skills. Mary Kom not only established herself as a recognized national athlete but successfully became a female icon for women and young girls all over the world.

Best known for her role in Fabulous Lives Of Bollywood Wives, Neelam Kothari is an Indian actress and jewellery designer. She made her acting debut with Jawaani in 1984, and since then has acted in many movies. She retired from the movie industry in 2001 and reignited her love for jewellery. She started designing jewellery under the name Neelam Jewels. And now owns a jewellery store named Neelam Kothari Fine Jewels.

The boss lady and founder of ‘Rheason’ Rhea Kapoor turned down acting, unlike her sister and father and succeeded by creating a high street fashion label. She successfully designed the outfits for Veere Di Wedding. Rhea has managed to carve a place for herself in the fashion industry that is already overcrowded. Instead of fading into the crowd, the stylist has been shattering the glass ceiling with her style statements, limited collections, and her many fashion collaborations.

Starting her journey with the movie Teen Patti, Shraddha Kapoor only had her breakthrough with Aashiqui 2 in 2013. Bringing different roles and characters to life, from the preppy girl next door to a hauntingly beautiful ghost in Stree, Shraddha Kapoor has made her mark in the industry. She has put her all and worked hard to achieve the success she is at today, whether it is singing for her own movies or dancing to match the skills of her co-stars. Apart from her performances, Shraddha Kapoor’s sense of fashion and style is effortless, where she pulls off any fashion look with ease!

Kapoor made her debut in 2018 with Dhadak, a Bollywood adaptation of the critically-acclaimed Marathi film, Sairat. And ever since has risen with more note-worthy performances. Although faced with a lot of criticism for her privileged background, Janhvi Kapoor has made peace with it. Handling trolls and hate like a queen, Janhvi says, ‘ The audience is not obligated to love you, you’ve to give them reasons to’. With an award deserving film, Gunjan Saxena, Janhvi is sure to give her audience many more notable films.

Known for her breakthrough performance with the film, The Lunchbox, Nimrat Kaur was recognised for her abundant talents and skills. She has starred in the American TC series, Homeland and beside Akshay Kumar in Airlift. Known as ‘disarmingly natural’, Kaur blends into the movie script and allows the magic to take over. Giving all of her 100%, Kaur never backed out from her characters. She is a very down to earth actor who loves new people and new energies.

An astronaut, engineer and the first Indian woman to go to space, Kalpana Chawla reached for the stars and beyond! Born in Karnal, India, Kalpana earned a doctorate in aerospace engineering from the University of Colorado and began working at NASA’s Ames Research Center the same year, working on power-lift computational fluid dynamics. Chawla was posthumously awarded the Congressional Space Medal of Honor, and several streets, universities, and institutions have been named in her honour. She is regarded as a national hero in India.

Saina Nehwal is the first-ever badminton player to represent India, 3 times and bag an Olympic medal. The Indian shuttler created history when she won the bronze medal at the London 2012 Games. Nehwal’s confidence started flourishing as she began to establish herself in the field of Badminton, winning many titles. She is also the only Indian to have won at least one medal in every BWF major – the World Championships, the World Junior Championships – and that most precious bronze medal at the Olympics.

The Indian actress and director is best known for her work in theatre, television and Bollywood films. And has worked in theatre includes a series of plays in both English and Hindi. ‘That’s Middleclass’, the famous catchphrase that was popularised by Ratna Pathak in  Sarabhai vs Sarabhai, where she played high society elite, and stood out in a sea of noteworthy performances. For her role as Maya Sarabhai, she was awarded the best actress in a comic role. Her latest performance in Lipstick Under My Burkha bagged her many Filmfare nominations.

Indian pop singer, Alisha Chinai is known for her Indi-pop albums as well as playback singing in Hindi cinema. Her best-known songs include Kajra Re from Bunty Aur Babli, for which she won a Filmfare Award for Best Female Playback Singer. Alisha Chinai began her singing career with the album Jadoo in 1985, and in 1990, she had become known as the ‘Queen of Indipop’. She was also a judge on Indian Idol 3, and is a judge on Zee TV’s Star Ya Rockstar with Anu Malik. Chinai has now retired from the film industry and sees no plans in making a comeback in Bollywood, but hopes to have a music career on independent platforms like YouTube.

A popular Indian actress, Rani Mukerji is a recipient of multiple awards for her portrayal of women characters. Establishing herself in many romantic movie roles, she quickly adapted to more serious roles with movies like Black, No One Killed Jessica and Mardaani. Apart from shining on the silver screen, she is involved with humanitarian causes and is vocal about issues faced by women and children.

The Indian actress, Renuka Shahane has worked in Hindi, Marathi and Telugu films and television shows. She is a well-rounded, knowledgeable personality, holding a B.A. in Psychology from St. Xavier’s College and Post-graduation in Clinical Psychology from Mumbai University. Renuka is a theatre actor and established herself with TV performances in Circus, Kora Kagaz and Sailaab. She is known for her role in Hum Aapke Hain Koun..! for delivering a wholesome performance. Tribhanga, a 2021 Netflix original, is Renuka Shahane’s Hindi directorial debut starring Kajol, Tanvi Azmi, Mithila Palkar.

While these March women have taken the world by a storm, let’s draw our inspiration and make our own mark in the world. They have taught us that we don’t have to go with the flow but against the current if we are passionate about something! Let us uplift ourselves and fellow women of the world to great heights.

Food For Thought: The Right Way To Eat Iron-Rich Foods To Tackle Anaemia In Women