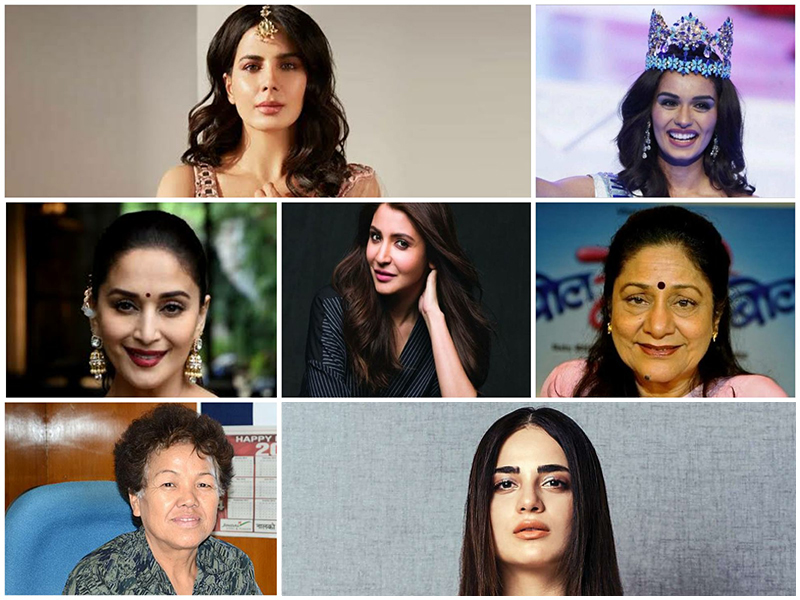 As the summer rolls in this May, it brings mixed weather feelings for all of us. Strong afternoon heat, calm and cooling evening glow and charming sun rays in the morning, also brings us strong, charming and uber-cool women born during this month. They excel in the field they have chosen and proved that they are as good as the next person. From our dhak dhak queen of dance and expressions, Madhuri Dixit to fearless mountaineer Bachendri Pal, the month of May has women acing in different colours of life.

Not only have they managed to capture their audience with their powerful skills and talents in the world of entertainment and sportsmanship they have also inspired women across the nation to follow their dream. TC46 is thereby saluting 7 #BharatiyaaNaaris who were born in the month of May.

Making her mark in the Bollywood industry, Anushka Sharma debuted opposite Shah Rukh Khan in Rab Ne Bana Di Jodi. Later starring in multiple romantic comedies. But before stepping into the silver screen, Anushka walked the ramp for many leading brands including Wendall Rodricks. Although most of her films received mixed reviews from its viewers, Anushka only aimed and achieved more. Her roles in movies like PK, NH10 and Dil Dhadakne Do, won her many accolades. She gained massive success for her role in Ae Dil Hai Mushkil, alongside Ranbir Kapoor and Aishwarya Rai, for her spunky character display. Apart from her wonderful acting talent, Anushka has also launched her clothing brand ‘Nush’ and also a production company with her brother ‘Clean Slate Films’. She has produced movies like Paatal Lok and Bulbbul.

In her words: “Having failures in life is important to understand where exactly you stand.”

Before ruling the silver screen in movies like Angrezi Medium and Pataakha, Radhika Madan acted in a popular TV show Meri Aashiqui Tum Se Hi. She is one of the few actors who have successfully made their mark in the television industry and the big screen. Her amazing on-screen persona and talent have won the hearts of many as she continues to explore different roles. Her 2018 movies, Mard Ko Dard Nahi Hota was screened for the MAMI film festival, and her acting was praised as ‘sheer talent’.

There is no set number on how many movies veteran actress Aruna Irani has acted in. But she has made her mark and shone in the Hindi, Marathi, Gujarati and Kannada cinema. Along playing mostly supporting roles, Aruna Irani was honoured with the Filmfare Lifetime Achievement Award at the 57th Filmfare Awards in 2012.  She made her acting debut in early 1961 with Ganga Jamuna and since then starred in many movies. She is known for her motherly characters and has bagged many awards for her stunning performance.

From being a medical student to being crowned as Miss World 2017, and now working on her debut film Prithviraj. Manushi Chillar is excelling in every field. Her humble and popular answer ‘mother’, for the question, ‘Which profession should receive the highest salary in the world?’, won her the title of Miss World. Her sincerity, passion and intelligence wipes out the stereotype that women cannot be beautiful and extremely intelligent too.

In her words: “The sky is the limit. We are limitless and so are our dreams, we must never doubt ourselves..”

From Dhak Dhak to Dola Re, you can’t help but groove to the dance moves and tunes of Madhuri Dixit.  She has not only changed and inspired the acting industry, but created moves that charmed the nation. Debuting in 1984 with the movie Abodh, her initial movies failed miserably in the box office but won praises for her performance. It was only in 1988, her career took a significant turn towards success and has never stopped since. She has also been praised and nominated for a Filmfare award with her recent film, Kalank. She is also the judge for a dance show  Jhalak Dikhhla Jaa and cooking game show, Food Food Maha Challenge along with Sanjeev Kapoor.

In her words: “Depend on yourself. You won’t be let down.”

Breaking all stereotypes connected to women and their physical capabilities, Bachendri Pal became the first woman to reach Mount Everest’s summit in 1984. She was felicitated with the Padma Shri, Arjuna Award and Padma Bushan for her great achievements. Post her achievement, she continues to lead Everest expeditions with an all-women team. Her autobiography, ‘My Journey To The Top’ journals the journey she undertook to scale Mt.Everest.

In her words: “The biggest risk in life is not to take the risk. Always remember that,”

Popularly known for her role in Four More Shots!, Kirti Kulhari made her debut with Khichdi: The Movie. She has also dabbled in plays and commercials before taking up Bollywood movies. Kirti Kulhari is known for the memorable characters she has played. She is praised for her skills and has been nominated for many awards. Kirti Kulhari has recently acted in the movie The Girl On The Train. She broke the usual stereotypes surrounding marriage after announcing her separation from her husband and being open about a topic that is still considered taboo.

The women of May have paved their path in their respective fields shining light for those who’d want to follow. It is not an easy path, but these Indian women have proved that every dream is possible. Why not take them as an inspiration and make your own way, even if it’s a small mark. Tell us in the comments below which are the other women born in May who have managed to capture your thoughts!