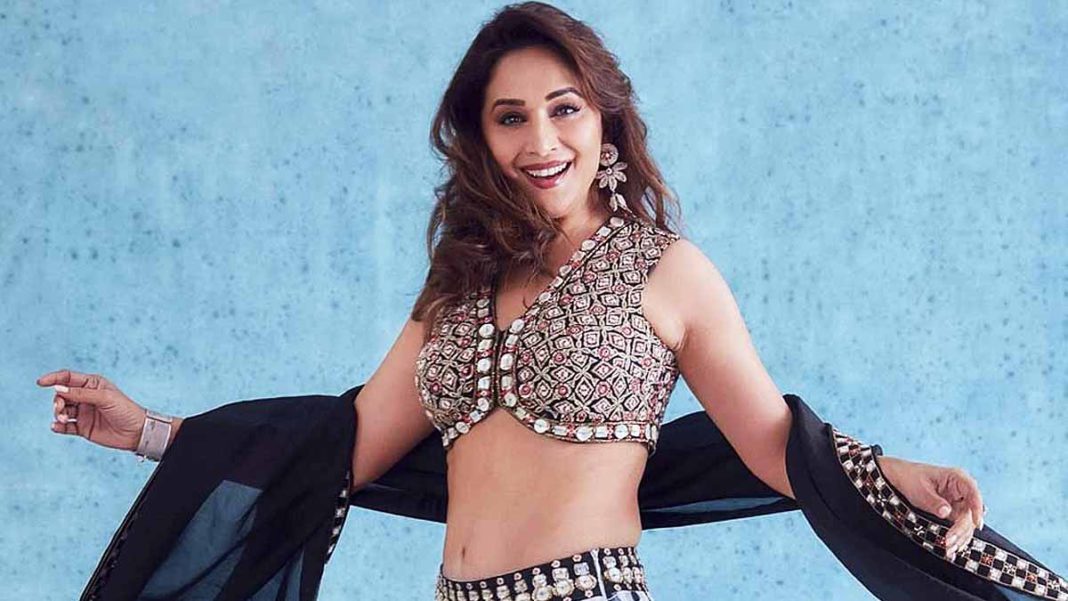 It is for nothing that Madhuri Dixit is called the Dhak Dhak Girl even to this day. The captivator of all hearts, across generations and genders, she keeps us hooked onto the screen with her enormous screen presence and dancing skills that are a delight to watch. The music of her movies from the 90s evokes nostalgia and takes you down memory lane. To say that she wields power in Bollywood even at 55 would be nothing more than a distasteful, ageist remark. She is an epitome of beauty and grace, and will always remain so. One thing that is common between her earlier movies and those she starred in after her career sabbatical is the music, so many of which have remained iconic till today.

On Madhuri Dixit’s birthday (15th May), here’s listing 11 songs featured on her that should definitely make it to your playlist.

This song gave Madhuri the title of the Dhak Dhak girl. The sensuous number was sung by Udit Narayan and Anuradha Paudwal, composed by Anand and Milind, and written by Sameer. It won Anuradha Paudwal the Filmfare Award for The Best Female Playback Singer and Saroj Khan for Best Choreography.

This was one of the songs in the early stages of Madhuri Dixit’s career that brought her immense recognition. One of the most popular songs during the growing up years of millennials, it makes an appearance time and again during a game of antakshari. With Laxmikant and Pyarelal as music directors, and Javed Akhtar as the lyricist, the song was brought to life by none other than Alka Yagnik. You cannot but shake a leg or two every time you play this song from the movie Tezaab.

This classic from the movie Hum Aapke Hain Koun..! still finds a place in the pre-wedding song playlist. Such is its timeless aura. The lyrics were written by Dev Kohli and composed by Raamlaxman. With the melodious voice of Late Lata Mangeshkar to bring the song to life, there couldn’t have been anything that would have gone amiss with this song. Not just the music, Madhuri’s dance moves and her whole look made it the talk of the country.

Another of Madhuri’s dance numbers ceases to mesmerise you with its peppy beats and catchy tune. Picturised on Madhuri and her co-star Sanjay Dutt from the movie Thanedaar, it was composed by Bappi Lahiri, who also lent his voice to the song, along with Anuradha Paudwal. Written by lyricist Indeevar, the music of the song drew inspiration from a French number Mori Kante. So evergreen is the music of this song that it was reprised for the movie Badrinath Ki Dulhania, featuring Alia Bhatt and Varun Dhawan.

Featuring in the movie, Yaraana, this is yet another popular song of the millennials. It was written by Maya Govind, composed by Anu Malik, and sung by Shankar Mahadevan and Kavita Krishnamurthy. As expected, Madhuri’s impeccable dance moves and perfect expressions won the hearts of her fans that’s spread across generations.

This fast-paced number featured on Madhuri Dixit and Prabhudeva, both dance legends in their own right, makes for an exciting watch. If the dance moves here from the movie Pukar, complemented with the catchy, rhythmic lyrics can’t make you dance, there is hardly any other song that perhaps will! Directed by the ace music composer, A R Rahman and lyrics by Javed Akhtar, Ke Sera Sera remains one of the most hatke numbers featuring Madhuri.

It would be an understatement to say that this song was a hit. It was a massive success with the dramatic dance-off between Madhuri Dixit and Aishwarya Rai, not to ignore the mellifluous voices of the singers, Shreya Ghoshal, Kavika Krishnamoorthy, and K.K. The meaningful lyrics by Nusrat Badr and music direction by Ismail Darbar further elevate the song to the reputation that it has achieved today.

This song is a living proof that Madhuri can easily hold her own on-screen even with actors of the next generation. Featured in the movie Yeh Jawaani Hai Deewani, also starring Ranbir Kapoor, the rhythmic beats of this number is sure to make you dance to its tunes. Composed by Pritam and written by Amitabh Bhattacharya, the song is sung by Rekha Bharadwaj and Vishal Dadlani.

Yet another dance number that you cannot resist grooving to owing to Madhuri’s undisputed panache for dance and expressive face. Featured in the movie of the same name, the lyrics by Piyush Mishra and the distinctiveness of the voice of Sunidhi Chauhan, makes this song a memorable one.

This inspirational song from the movie Gulaab Gang, sung by Shilpa Rao and Malabika Brahma, should definitely make it to your playlist. The lyrics written by Neha Saraf and directed by Soumik Sen, will give you goosebumps while you listen to it with your eyes closed.

This song celebrates the confluence of the best in the contemporary Hindi film industry – the best in their respective fields. Madhuri Dixit for her dancing skills, grace and expressive expressions, Rekha Bharadwaj for her voice that touches hearts, Gulzar for his lyrical abilities, and Vishal Bharadwaj for giving life to the words. Picturised in the movie Dedh Ishqiya, Madhuri Dixit shines yet again for all the qualities that she is known for.

#BeALittleMore active in recognising the vast contributions of Madhuri Dixit not just on her birthday but throughout the year. Are there any more songs that you would like to add to the above playlist? Mention the name of the song in the comment section below.

How Does The Abortion Pill Work & What You Can Expect, According To A Gynaecologist

20 Songs That Need To Be On Your Shaadi Playlist