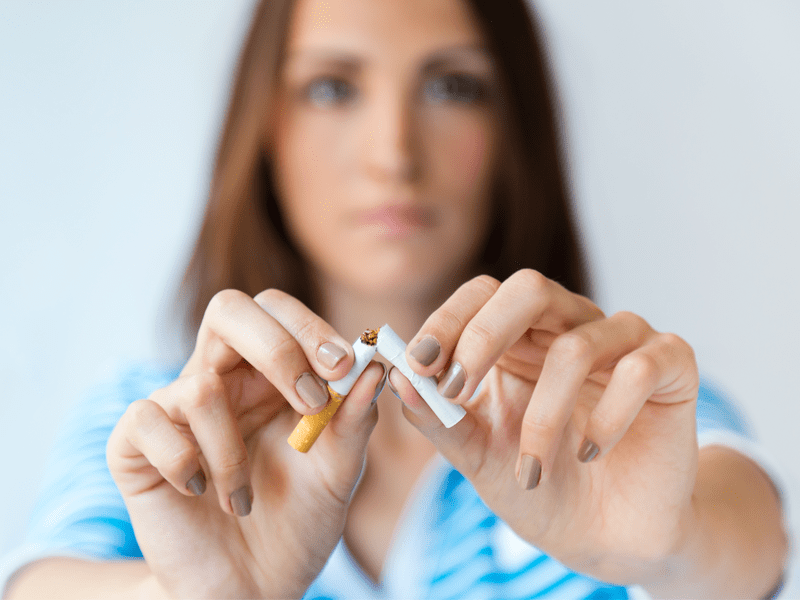 Leaning against the wall, cross-legged, without a worry, a cigarette dangling from your fingers might look “cool” in movies. But there is nothing good about what follows this addiction. Women smokers face a greater risk of cervical cancer, premature menopause, infertility, osteoporosis, and heart disease. And that’s just the tip of the iceberg. Not only can smoking shorten your life but it can speed ageing, causing changes in your skin, hair, and teeth that may be irreversible. The effects of smoking on one’s health are evident and yet this vile addiction seems to have become a trend, a pop culture phenomenon.

Tobacco contains more than 7,000 harmful chemicals. When a person inhales tobacco, all organs or systems of the body get affected such as the mouth, lungs, heart, brain, stomach and kidneys. Tobacco starts affecting our health immediately after smoking it. On No Smoking Day, TC46 puts forth the 10 major ways smoking affects women and reasons to kick this habit forever.

The nicotine in cigarettes slows the production of bone-producing cells, called osteoblasts. It is a critical thing for women who smoke and have gone through menopause. These women have lower bone density than the women who don’t smoke. They have higher chances of getting hip fracture than the rest of the women. Smoking triggers other bone-damaging changes, such as increased levels of the hormone cortisol, which leads to bone breakdown.

In today’s day and age of the COVID-19 pandemic, a healthy respiratory system is non-negotiable. Cigarettes are responsible for a substantial increase in the risk of developing lung cancer. Smoking also presents a greater risk of developing and dying from chronic obstructive pulmonary disorder (COPD).

Smoking cigarettes can damage the heart, blood vessels, and blood cells. Smoking also increases the risk of peripheral artery disease (PAD), which occurs when the arteries to the arms and legs start to narrow, restricting blood flow. Research shows a direct link between smoking and developing PAD. Even those who used to smoke face a higher risk than people who never smoked.

Having PAD increases the risk of experiencing:

4. Invokes the risks of pregnancy complications

Smoking not only causes fertility problems but also puts the health of the fetus in grave danger. It increases the risk of ectopic pregnancy, preterm delivery and sudden infant death syndrome. Smoking reduces the baby’s birth weight, damages the fetus’s lungs, brain, and central nervous system and contributes to congenital abnormalities, such as cleft lip or cleft palate. It puts the fetus at high risk for miscarriage and stillbirth.

Smoking tobacco increases one’s risk of developing a variety of serious health conditions, some of which may be fatal, as well as contributing to the ill health of others in close proximity, such as family members and friends. Nicotine is known to be immunosuppressive that can lead to decreased neutrophilic phagocytic activity as well as affect chemotaxis and cell signalling, in addition to inhibiting the release of reactive oxygen species (ROS) thus impairing the ability of neutrophils to kill pathogens.

People who smoke have a higher risk of gum problems, having complications after tooth extractions and surgery in the mouth, and developing oral cancer. Smoking tobacco can limit a person’s ability to taste and smell things properly. It can also stain the teeth yellow or brown.

The most common oral problems affecting people who smoke are:

Smoking cigarettes can damage a female’s reproductive system and make it more difficult to get pregnant. This may be because tobacco and the other chemicals in cigarettes affect hormone levels. Chemicals (such as nicotine, cyanide, and carbon monoxide) in cigarette smoke speed up the loss rate of eggs. Infertility rates in both male and female smokers are about twice the rate of infertility found in nonsmokers. The risk of fertility problems increases with the number of cigarettes smoked daily.  Even fertility treatments such as IVF may not be able to fully overcome smoking’s effects on fertility.

9. Ruins your hair and skin

Without proper blood circulation, your skin doesn’t receive the support necessary to stay lifted, firm, and radiant. Cigarettes expose your body to free radicals while depleting levels of vitamins A and C – antioxidants that play important roles in collagen and elastin production. Resulting in premature ageing in the form of dryness, enlarged pores, sagging, wrinkling, hyperpigmentation, and uneven texture. Research links smoking cigarettes to hair loss and greying. The theory is that the combination of blood vessel constriction, inflammation, toxicity, and hormone imbalance damages hair follicles.

Rather than helping people relax, smoking actually raises levels of tension and anxiety. Nicotine has an immediate and short-lived feel-good factor but this quickly fades and gives way to withdrawal symptoms which mirror the symptoms of anxiety. People with depression are known to have lower levels of the natural chemical dopamine which when released in the brain triggers positive happy feelings. Nicotine in cigarettes stimulates the release of dopamine so can give smokers a short-lived high. But smoking also prompts the brain to switch off the natural supply of dopamine so the supply decreases in the long-term and people have to smoke more.

5 Pretty Ways To Braid Your Hair

5 Ways You Can Exfoliate Your Skin For A Smooth Texture